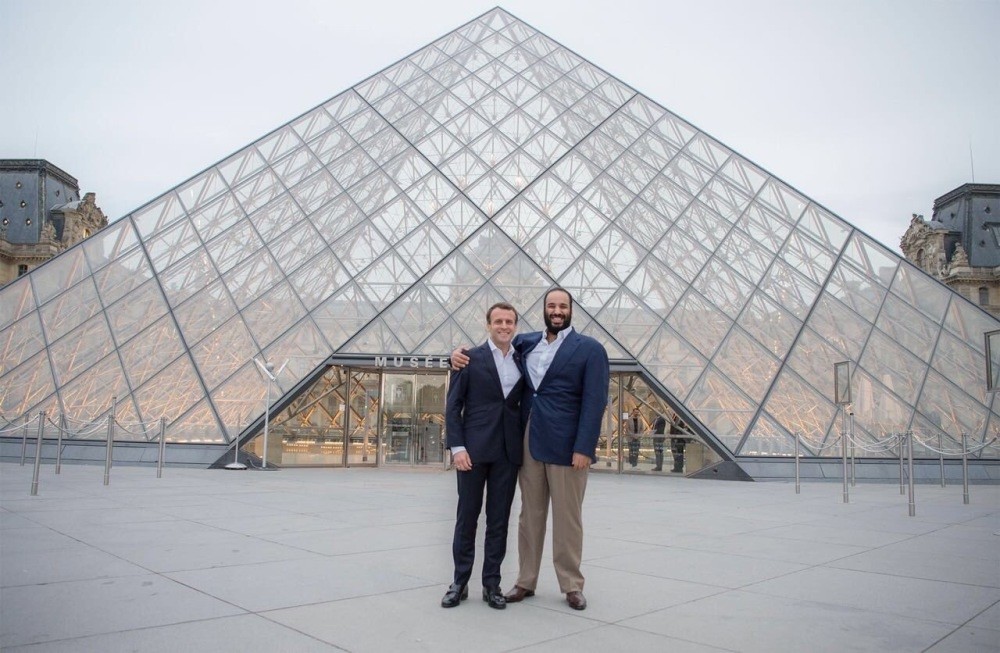 French President Macron (L) and Saudi Crown Prince Mohammad in front of the Louvre, Paris, April 8.
by Daily Sabah with Wires Apr 12, 2018 12:00 am

Against the backdrop of ambitious economic plans in Iran with many French giants investing in the county, France is maintaining close ties with Saudi Arabia in a bid to assert its mediator role in the Gulf and Middle East

After the nuclear deal, also known as the Joint Comprehensive Plan of Action (JCPOA), was signed in 2015 with efforts led by China, France, Germany, Russia, the U.K. and the U.S., to lift economic sanctions on Iran in return for curbing the country's uranium stocks to limits its nuclear capability, European companies, particularly French giants such as Total, Renault and PSA, have been looking for investment opportunities in Iran. Until very recently, they have even pressured the U.S. government not to block the agreement to be able to benefit from the nuclear deal. But France has voiced support for Iran's rival Saudi Arabia, inking a number of deals during Saudi Crown Prince Mohammad bin Salman's visit to the country.

French President Emmanuel Macron said Tuesday that he had agreed with the Saudi crown prince on the need to curb Iran's attempt to grow its influence in the Middle East. At a press conference with the crown prince, Macron admitted to differences with Riyadh on the 2015 Iranian nuclear deal, but said the two agreed on the need to "limit Iran's ballistic activity and regional expansionism."

"France believes we must preserve the structure of the Iranian nuclear deal, but it must be complemented by the work that has been done on limiting Iran's ballistic activity and its regional expansionism," he said. He added that the partnership between Saudi Arabia and France is very important, especially now that Europe and the Middle East are going through changes. He also addressed the crown prince's critics and asked them to give the "young leader" a chance. The French public has severely criticized Macron over not suspending arms sales to Saudi Arabia and its regional ally United Arab Emirates (UAE) because of the ongoing conflict in Yemen.

Macron's comments during the crown prince's visit to France came after the two leaders signed a number of business and cultural deals to boost rapport between the two countries. However, it raises questions about the future of French investments in Iran, which increased after the 2015 nuclear deal.

French energy giant Total and China's state-run China National Petroleum Corporation (CNPC) signed a deal with the state-run National Iranian Oil Company in July 2017 to develop the South Pars offshore field, one of the world's largest natural gas fields. The deal was Iran's first energy agreement with foreign companies since the JCPOA. The contract, which was signed in Tehran, is for 20 years, and involves 20 wells, two wellhead platforms, and to connect two existing facilities by underwater pipeline. A second phase includes constructing offshore compression facilities. The project's goal is to process 2 billion cubic feet of natural gas a day, the equivalent of about 400,000 barrels of oil. Total will have a 50.1 percent stake in the deal, with CNPC taking 30 percent and Petropars, a subsidiary of the state-run National Iranian Oil Company, 19.9 percent.

Total is already familiar with the realities and practices of the Iranian market, as it was the last Western energy company to suspend operations in Iran after sanctions were imposed by the international community 10 years ago.

Amid threats from U.S. President Donald Trump to withdraw from the nuclear accord in May, Total CEO Patrick Pouyanne urged Trump to stick with the nuclear deal with Iran, where it has investments, in an interview with the Financial Times.

Moreover, France's state-owned Bpifrance investment bank announced that it will start offering euro-denominated credit to Iranian buyers of its goods later this year in a move to bolster trade while keeping it outside the reach of U.S. sanctions. By structuring the financing through vehicles without any U.S. link, whether to the currency or otherwise, the aim is to avoid the reach of U.S. legislation.

In 2016, French carmaker PSA Group signed a framework deal with Iranian counterpart SAIPA to produce and sell Citroen vehicles in the country. The deal obliges the Paris-based carmaker to invest 300 million euros over the next five years for the development and production of three Citroen models, which will be sold throughout the country via a network dedicated exclusively to the maker, through a new joint venture, Reuters reported. PSA, formerly known as PSA Peugeot Citroën from 1991 to 2016, pulled out of Iran in 2011 under U.S. pressure.

After a lengthy negotiation, the Renault Group finalized a contract for a joint venture with Iranian carmakers on Aug. 7. According to the terms of the contract, 60 percent of the shares of the company created will be held by Renault, the state company Industrial Development and Renovation Organization of Iran (IDRO) will hold 20 percent and 20 percent will go to Negin Khodro, the official dealer of imported Renault cars in Iran. The stated objective is to increase the production of different models of Renault vehicles to 150,000 per year.

In terms of economic relations, according to a report by Muriel Penicaud, former director of the French Agency for International Investments, since the signing of the nuclear agreement, officials from more than 300 French companies visited Iran and more than 2,000 companies expressed their interest to work with Iranian partners.

Against the backdrop of these economic plans and its determination to preserve the nuclear deal, France is trying to keep ties with Saudi Arabia close, both politically and economically. This approach brings up France's overall agenda in the Gulf and greater Middle East. Recently, particularly in the Syrian war and Lebanese Prime Minister Saad Hariri's curious resignation and reversal, France is looking to be a mediator for all states in the Gulf, capitalizing on the declining trust in the U.S. as a safety guarantor in the region. When asked about Macron's policy dynamics concerning Tehran and Riyadh, Bernard Hourcarde, senior research director at the Nationa Center for Scientific Research (CNRS), told Daily Sabah that it is difficult to explain Macron's policy on Iran. Hourcarde explained that Macron is surrounded by efficient neocons who build policy on bombing and regime change in the country while opposing the nuclear deal.

To assert this claim, France has been careful to sustain good relations with Riyadh and Tehran without breaking the delicate equilibrium.

France has also maintained close relations with all parties involved in the Gulf crisis that erupted in June 2017, and Macron has been one of the European presidents most involved in the mediation process between Doha and other parties such as Bahrain, Egypt, Saudi Arabia and the UAE.