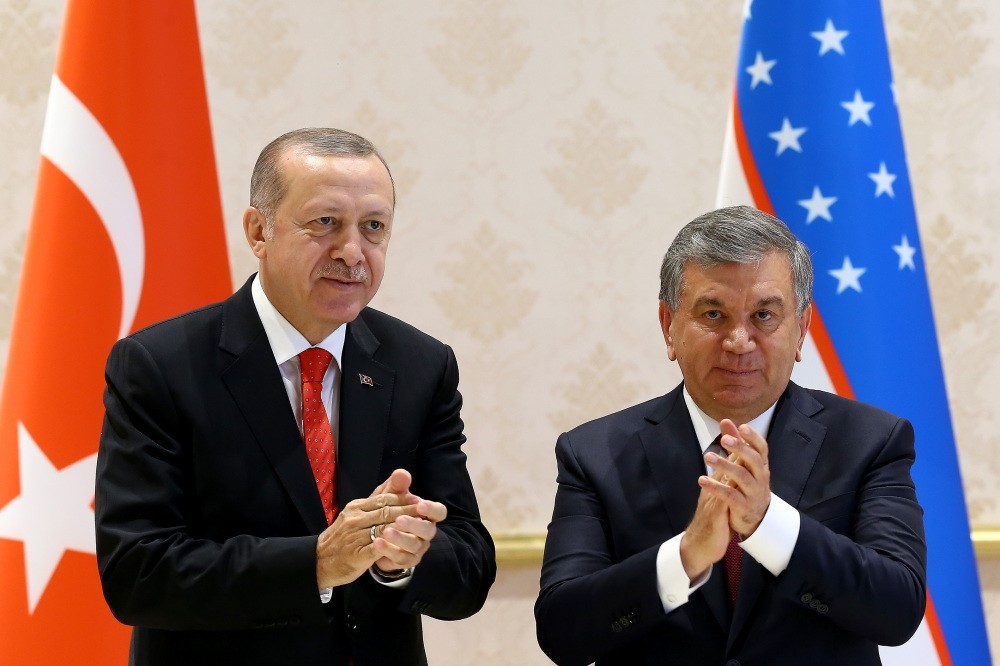 President Erdou011fan (L) and Uzbek President Mirziyoyev (R) held a joint press conference after meetings in the Uzbekistan capital Tashkent, April 30.
by Daily Sabah May 01, 2018 12:00 am

Signing 25 political, economic and cultural agreements and agreeing on 50 prospective investment projects worth over $3 billion, Turkey and Uzbekistan stressed that the joint investments will reinforce bilateral political and economic relations

With a full-fledged business agenda, President Recep Tayyip Erdoğan launched a five-day visit to the Central Asian country Uzbekistan and South Korea accompanied by a delegation of ministers and businesspeople. On the first leg of his two-country visit, Erdoğan met Uzbek President Shavkat Mirziyoyev yesterday. The meeting of the two leaders resulted in 25 agreements particularly in energy, economy and trade. Erdoğan described the agreements as the launch of a long journey in bilateral relations, underscoring that Turkey is the first country to ink so many deals with Uzbekistan. Speaking at the joint press conference with Mirziyoyev in the capital Tashkent, Erdoğan stressed that the two leaders and their delegations exchanged opinions on regional and global matters. Regarding the bilateral ties, the president said: "We have many more steps to take and today as Turkey and Uzbekistan we have set off on a long journey with the agreements signed here. The business forum, which we will hold for the first time, will encourage new investments." The first Turkey-Uzbekistan Business Forum organized by the Foreign Economic Relations Board (DEİK) as part of the president's visit to the country was scheduled to take place yesterday.

The president highlighted the economic aspect of his visit and informed that Turkish and Uzbek businesspeople are continuing talks for joint investment projects."We will encourage our entrepreneurs to partake in projects in Uzbekistan," Erdoğan said, as the country has recently made important initiatives to integrate with the global economy. The president also pointed out the upward trend in Turkish-Uzbek economic ties as the bilateral trade volume hit $1.5 billion in 2017 with a 30 percent increase. "We now set the goal to reach $5 billion in bilateral trade. Though it may seem difficult, it is not impossible with Uzbekistan's 33 million population and 81 million people in Turkey. Erdoğan underscored that the Turkish Cooperation and Coordination Agency (TİKA) is planning an investment of $60 million in Uzbekistan.

Uzbek President Mirziyoyev said that President Erdoğan's visit has paved the way for a new era in bilateral ties and added that the two countries had the chance to cover political and economic matters to a broad extent in meetings. In a same vein as Erdoğan, Mirziyoyev also said the aim is to secure a $5 billion in trade volume, which was $400 million in the first quarter of the year. The Uzbek president stressed that Turkey and Uzbekistan agreed on 50 new investment projects with an estimated cost of more than $3 billion.The two countries signed agreements for the construction of coal and natural gas facilities, new terminal and infrastructure developments at Tashkent Airport, the construction of an office building for Turkey's state lender Ziraat Bank, the development of religious tourism, mine survey, archival cooperation between states, training of security forces, protection of immigrant workers, fight against crimes, fight against money laundering, financing of terrorism and extradition of criminals.

Mirziyoyev also announced Uzbekistan will join the Cooperation Council of Turkic-Speaking States. "We have long negotiated with President Erdoğan. The Uzbekistan flag will also be among the flags in this council. Uzbekistan will also attend the meeting in Bishkek, this is an important, big decision," the Uzbek president said.

During President Erdoğan's visit, the Turkey-Uzbekistan High-Level Strategic Cooperation Council was also formed and it was confirmed that the first meeting of the council will be held in Turkey.

During a visit by Mirziyoyev to Turkey in October, the two countries agree to increase flight frequencies to support tourism and Uzbekstan agreed to waive visa requirements for Turkish citizens.

While Uzbekistan Airways launched flights between Istanbul and Samarkand in late October, Turkey's national flag carrier Turkish Airlines (THY) also added the historic central-Asian city to its destinations from Istanbul in mid-March. Samarkand, part of the UNESCO World Cultural Heritage list, has been added to the flight network as the 302nd destination of THY.

According to information from DEİK, the International Monetary Fund (IMF) and the Turkish Statistical Institute (TurkStat), the size of Uzbekistan's economy is around $67 billion. In the country, in which 433 Turkish companies operate, investments made since 1991 stood at approximately $700 million. It is known that Turkish contracting firms have undertaken important projects in Uzbekistan. Improving diplomatic relations between Turkey and Uzbekistan is also reflected in the trade between the two countries, which rose from about $1.4 billion in 2013 to $1.5 billion last year.

Turkey's exports to Uzbekistan surged by 21 percent in five years last year, reaching $680.2 million, while imports from this country reached $823.3 million in the same period with an increase of 1 percent.