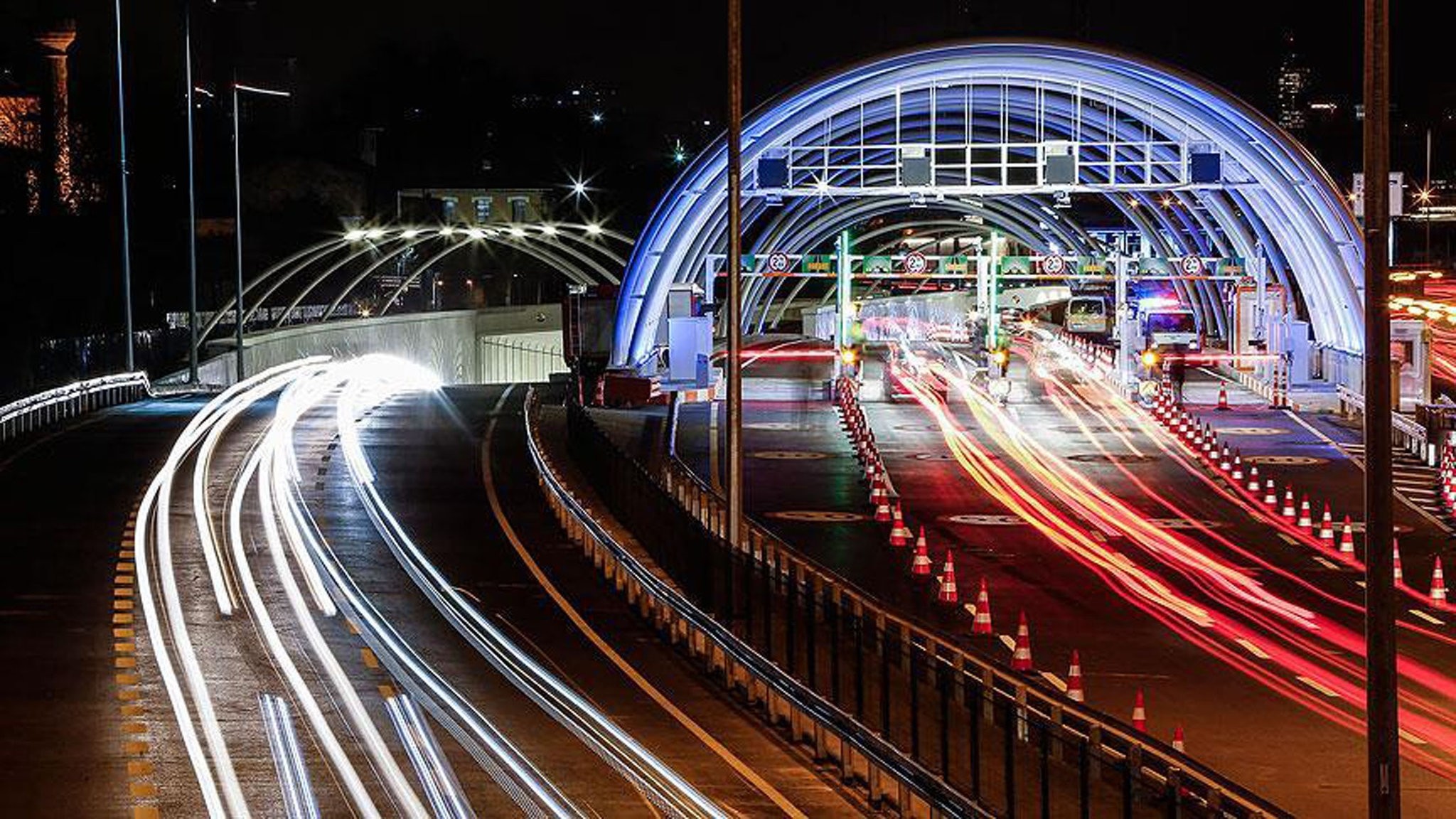 The Eurasia Tunnel, Turkeyu2019s first undersea tunnel connecting Europe and Asia in Istanbul, was constructed through a partnership between Turkeyu2019s Yapu0131 Merkezi and SK E&C of South Korea.
by Daily Sabah with AA May 02, 2018 12:00 am

President Recep Tayyip Erdoğan's two-day visit to South Korea on May 2-3, during which he will be accompanied by a large delegation of ministers and Turkish businesspeople, has raised hopes to deliver tangible results to further strengthen the economic rapport between the countries. Since the president's visit will largely cover joint investment opportunities and cooperation in the defense industry, it will also unleash the potential for previously unexplored areas of cooperation, the business world expects. As part of the visit, the president is scheduled to attend the Turkey-South Korea Business Forum in the capital Seoul, where he will meet with the executives of the country's leading conglamerates, including Samsung, LG, Hyundai, Daewoo, Daelim, Hanwha, Seoyon - which produces interior parts for many automobile companies - and Hana Investment Bank. Many of these giant companies have an annual market volume totaling trillions of dollars and have serious investments in Turkey. South Korean companies are already very familiar with the Turkish investment environment as 312 firms from the country currently operate in Turkey, according to the Economy Ministry. The figure, however, was recorded as 134 in 2007. The investments of these companies, operating in retail trade, automotive, information technologies, electronics, mining, tourism and manufacturing, exceed $2 billion.

As well as investments in the country, South Korean firms also engage in consortium partnerships with Turkish companies to partake in mega-scale projects in Turkey. In January last year, a consortium of South Korean companies – Daelim, SK E&C and Limak – and Turkey's Yapı Merkezi OGG won a tender and a 192-month lease for the historic bridge in Çanakkale, which is a gateway to the Gallipoli World War I battlefields, north of the narrow strait. The Çanakkale 1915 Bridge, set to be the longest suspension bridge in the world, is witnessing Turkish and South Korean firms working together in the multibillion-dollar project.

Furthermore, South Korea's Hanwha Group, in a consortium with Turkey's Kalyon Group, was contracted the construction of Turkey's largest solar power plant in Central Anatolian district of Karapınar at a tender for Renewable Energy Resource Areas (YEKA) in March 2017.

Turkey's first undersea tunnel connecting Europe and Asia in Istanbul, the Eurasia Tunnel, was constructed through a partnership between Turkey's Yapı Merkezi and SK E&C of South Korea, with an estimated $1.25 billion investment.The Foreign Economic Relations Board (DEİK) Turkey-South Korea Business Council Chairman Ali Kibar highlighted that Turkey's ties with South Korea have been following a positive trend since the Korean War, during which Turkey supported the nation.

The strong political and economic rapport between the two countries has so far yielded a great number of opportunities for cooperation and investment projects, Kibar remarked. "Currently, both Turkey and South Korea have a huge investment agenda. As part of the economic aspect of President Erdoğan's visit to the country, meetings with Hyundai Assan, Rotem Construction and Hyundai Construction will include discussions on the matters of automotive industry. Another meeting with Posco will cover the partnership operations," Kibar said. Moreover, he added, new investment opportunities will be discussed with high executives of SK, Hanwha, LG and Daelim. Additionally, a series of talks will be held with South Korean small, medium and large enterprises to open up new areas of economic partnership, Kibar stated.

Erdoğan's visit will unleash the potential to seize numerous opportunities offered by South Korea's energy, defense, transportation, construction, logistics, infrastructure, information, mining, nuclear, tourism and innovative technologies sectors as well as among many others while strengthening the cultural and political bonds between Turkey and South Korea, Kibar said.

The DEİK Turkey-South Korea Business Council chairman also underscored the importance of securing financing from large-scale South Korean enterprises for Turkey's megaprojects and recalled that South Korean companies undertook the contract for mega projects such as the Eurasia Tunnel and 1915 Çanakkale Bridge. Kibar also pointed out that big Korean firms might also partake in Kanal Istanbul, a canal parallel to the Bosporus designed to connect the Black Sea and Marmara Sea, and other similar projects.

South Korea previously announced that the country is interested, therefore, Kanal Istanbul will be one of the topics discussed during the president's meetings in South Korea.

The bilateral trade volume between Turkey and South Korea was recorded at $6.5 billion in 2013 and jumped to $7.2 billion last year.

No large-scale Turkish companies operate in South Korea, but there are small and medium-sized enterprises (SMEs) in the country, Kibar reminded. The export of some Turkish goods, however, is supported by the Turkish and South Korean economy ministries. He indicated that there is a great potential in infrastructure and manufacturing industry via joint investments and consortium.

"In addition to a one-to-one meeting between President Erdoğan and South Korean President Moon Jae-in, various inter-delegation meetings will take place during the president's visit from May 2 to May 3. Furthermore, meetings with the leading South Korean firms and business councils will also be held. The agenda of these series of meetings will focus on the improvement of economic ties between Turkey and South Korea and bolstering of the bilateral trade volume," Kibar said.

In order to expand the bilateral trade volume, Kibar remarked, a more balanced relationship must be established. The private sector should prioritize South Korea in its investment plans and the public sector must continue its supportive attitude for the Turkish business world.

Turkey should offer goods with high export potential to the South Korean market with public-private cooperation, Kibar said. "Moreover, exports of in the service sector, particularly investments in the tourism industry, will empower Turkey's share in the South Korean market. Another urgent matter that we must focus on is forming a qualified labor pool equipped with merits to engage in business dealings with South Korea," he added.In addition to the existing South Korean investments in Turkey, new investments from the country must be encouraged in the automotive, electronics, ship-building and steel industries, where South Korea has a global competitive advantage. Accordingly, Kibar noted that direct investments to increase Turkey's technology and production capacity must be supported. "The visit of the Turkish delegation therefore is of utmost importance to reinforce Turkey's commercial ties with South Korea and cement the dialogue between the business world and public institutions of the two countries," Kibar added, and highlighted that the support for new investments as well as large-scale industrial investments will boost the global competitiveness of the two countries.