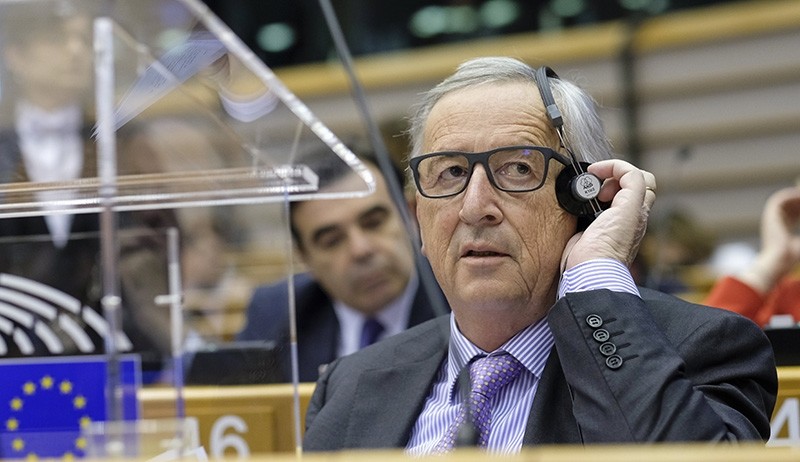 EU commission President Jean-Claude Juncker during a mini plenary session at European Parliament, in Brussels, Belgium, May 2, 2018 (EPA Photo)
by Compiled from Wire Services May 02, 2018 12:00 am

The European Union's executive branch has proposed a budget to finance new priorities like defense and border control as well as compensating for Britain's departure from the bloc.

European Commission President Jean-Claude Juncker said Wednesday that the 2021-2027 budget will be "bigger than the preceding one, because it will determine the future of our Europe of 27" members.

The Commission unveiled a seven-year spending package worth 1.135 trillion euros ($1.36 trillion), which accounts for around 1.1 percent of the bloc's total output.

"We are proposing a new mechanism that will allow for the protection of the budget linked to risks arising from deficiencies in the rule of law," Juncker told the European Parliament.

The departure of Britain, a net contributor, in 2019 leaves the bloc with what Juncker says is 15 billion euro gap in its accounts, but the EU also wants more money for ambitious projects to unify the remaining 27 member states.

EU Budget Commissioner Guenther Oettinger said member states would pay 1.114 percent of their annual gross domestic product under the plans, up from one percent in the current 2014-2020 multi-year budget worth 1.0 trillion euros.

One of the key proposed cuts is five percent from the Common Agricultural Policy, the largest single area of EU spending and one dear to major farm producer France.

There is also a five-percent proposed cut to so-called cohesion funds, which former Soviet bloc states in eastern Europe are the biggest beneficiaries from.

In return, the European Commission wants to spend more on the digital economy, research, defense and protection for the bloc's borders against mass migration, including what one European source said is a quintupling of the border force Frontex to nearly 6,000 people.

Countries including Austria and the Netherlands are already gearing up to fight any demand for increased national contributions, although France and Germany have said they are ready to pay more.

The plan is likely to cause fights on a number of other fronts.

Firstly, Warsaw and Budapest, locked in battle with Brussels over democratic standards and their refusal to accept refugees, oppose any attempt to impose conditions on the billions in funds they get from the bloc.

They view it as an attempt to punish them indirectly, without going through mechanisms like an unprecedented sanctions procedure launched by Brussels against Poland over its court reforms.

Juncker said "respect for the rule of law is an indispensable prerequisite for sound financial management and effective implementation of the budget."

But Poland was standing firm.

"We will not accept arbitrary mechanisms which will make the funds an instrument of political pressure," Poland's deputy European affairs minister Konrad Szymanski said earlier.

Secondly, the eastern states are also likely to oppose both the cuts to cohesion funds overall and also demands from southern nations like Spain and Italy that were hit by the economic crisis for some of those funds to be redirected.

Thirdly, protests by French farmers are likely over any attempt to cut the Common Agricultural Policy, from which they are the biggest beneficiaries.

Finally attempts by Brussels to push through the budget before the next European Parliament elections in May 2019 have also met a cool response.

"We cannot afford a lost year," Oettinger said, referring to the fact that the 2014-2020 budget took two years to pass.

EU states say it is "impossible" given the rifts between east, west, north and south, with countries anxious not to put their hands in their pockets at a time when populism is on the march.