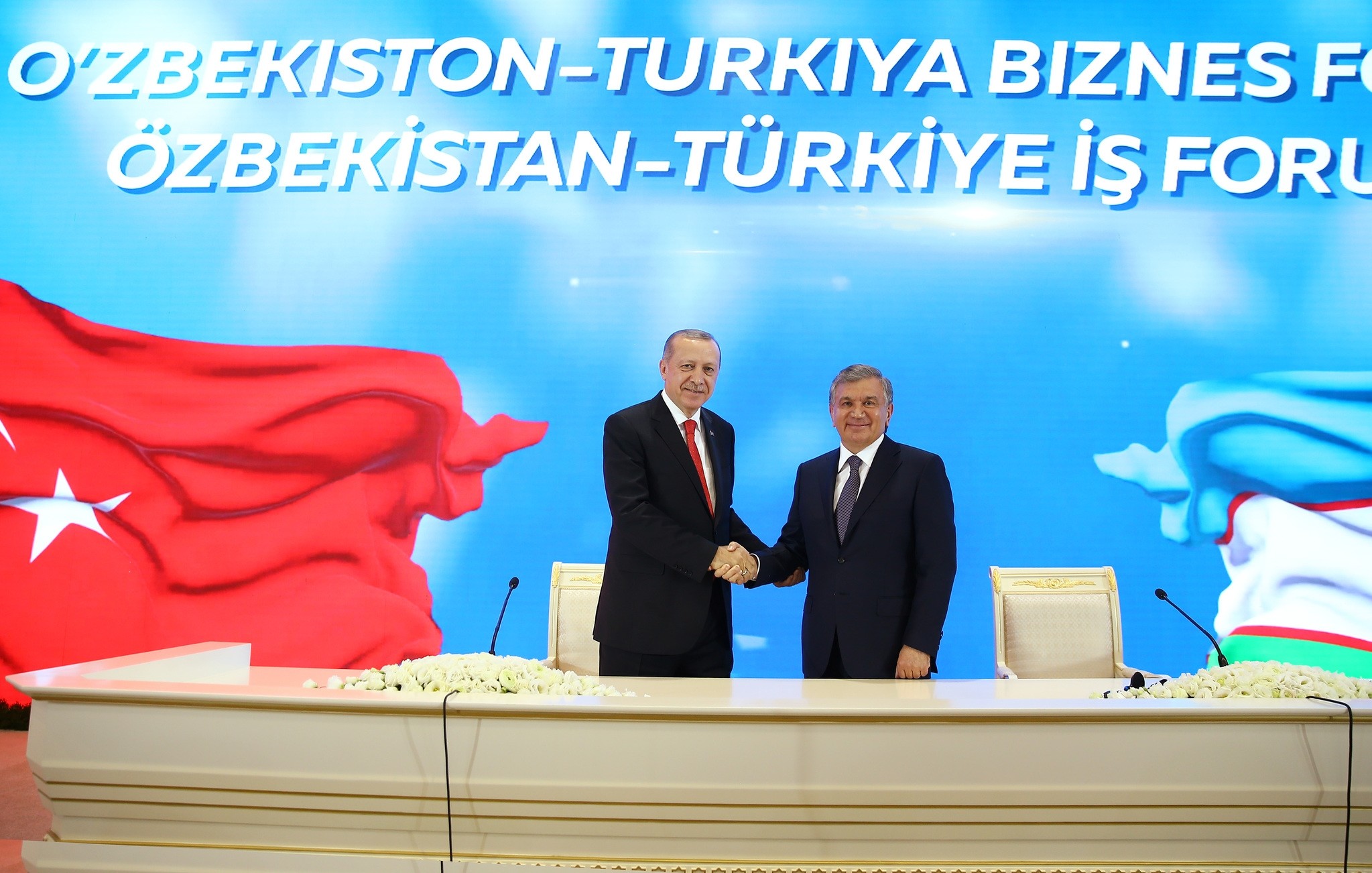 President Erdou011fan (L) and Uzbek President Mirziyoyev (R) attended the Turkey-Uzbekistan Business Forum in the Uzbekistan capital Tashkent, April 30.
by Daily Sabah with AA May 02, 2018 12:00 am

President Erdoğan's visit to Uzbekistan has smoothed the way for new Turkish investments in the country, as Uzbekistan invited Turkish businessmen to invest in its recently established free economic zones

President Recep Tayyip Erdoğan's three-day visit to Uzbekistan from April 29 to May 1 has paved the way for new investments by the Turkish businessmen in the country.

The president's visit witnessed 25 agreements, particularly in energy, economy and trade, signed between Turkey and Uzbekistan, which makes Turkey the first country to ink so many deals with Uzbekistan, while the two countries also agreed on 50 new investment projects with an estimated cost of more than $3 billion.

Uzbekistan, which aims to increase foreign direct investment (FDI) via its free economic zones, has invited Turkish investors to invest in the Urgut free economic zone, according to the zone's director, Jamshid Haydarov.

Elaborating on the opportunities the free economic zone offers investors, Haydarov said Uzbek President Shavkat Mirziyoyev passed a resolution on the establishment of four economic zones in Harezm, Bukhara, Samarkand and Fergana provinces last year, which will be exempted from taxes and customs payments for seven years, indicating that the Urgut free economic zone in Samarkand was one of these.

Haydarov pointed out that 60 projects worth about $196 million will be put into action in the region from 2019 onward. "Work on four projects in the region has started. We expect this number to reach 30 by the end of the year. Six of these new projects will belong to Turkish investors. The entire infrastructure of the free zone is ready, we are inviting the investors," he added.

He also said that contracts were made with companies in sectors such as electronics, carpentry, textile, shoe and small household appliances, adding that until the end of the year, three Turkish companies are expected to start their work.

Indicating that investors in the free zone will be exempted from customs payments for all the taxes from three to 10 years depending on the amount of investment and for the products they bring for production, Haydarov said: "Investors will be able to export their products from here to other countries without making any payments. Turkish investors can access the Eurasian and Asian markets from here. The Urgut free economic zone has been opened to attract Turkish investors personally to the country."

Within the scope of Erdoğan's visit to Uzbekistan, Turkey and Uzbekistan reached an agreement to build coal and natural gas plants with a public-private partnership principle.

The construction of an office building for Turkey's state lender Ziraat Bank and the development of religious tourism were also among the agreements.

Speaking at the Turkey-Uzbekistan Business Forum in Tashkent, Erdoğan said the projects carried out by Turkish investors played an active role and provided important contributions to the development of Uzbekistan.

The relations between the two countries have been raised to the level of a strategic partnership, the president said, adding that with this visit, they have carried the relationship a step forward.

"We are now establishing the High Level Strategic Cooperation Council, the mechanism necessary for the implementation of our strategic partnership in practice," the president informed.

Erdoğan also stressed that Turkey was ready to provide every kind of support to Uzbekistan on its way to realizing its objectives.

With the provision of visa exemption for Turkish citizens and with the start of the Istanbul-Samarkand flights, people of the two countries have gotten even closer, the president added.

Erdoğan said that because Turkish products are popular with Uzbek consumers, they are also encouraging businessmen and entrepreneurs to invest in Uzbekistan.

In his speech at the event, Mirziyoyev said Turkey was Uzbekistan's strategic partner and that they want to further improve their cooperation with Turkey.

The Uzbek president also said he believes the decision to lift the visa requirement for Turkish citizens would further serve the development of the cooperation between the two countries in trade, investment and tourism.

Mirziyoyev stressed that they agreed to increase the number of flights between the two countries and that flights from Istanbul to Bukhara and Urgench will be launched in the future.

Mirziyoyev said the decisions aim to improve the business environment, taxation and customs system in the whole country and facilitate the acquisition of licenses for entrepreneurship, adding that free economic zones where tax and customs exemptions exist were established and that they would enforce the new tax regulations as soon as possible.