Turkey, South Korea agree on cooperation for success of 2023 vision 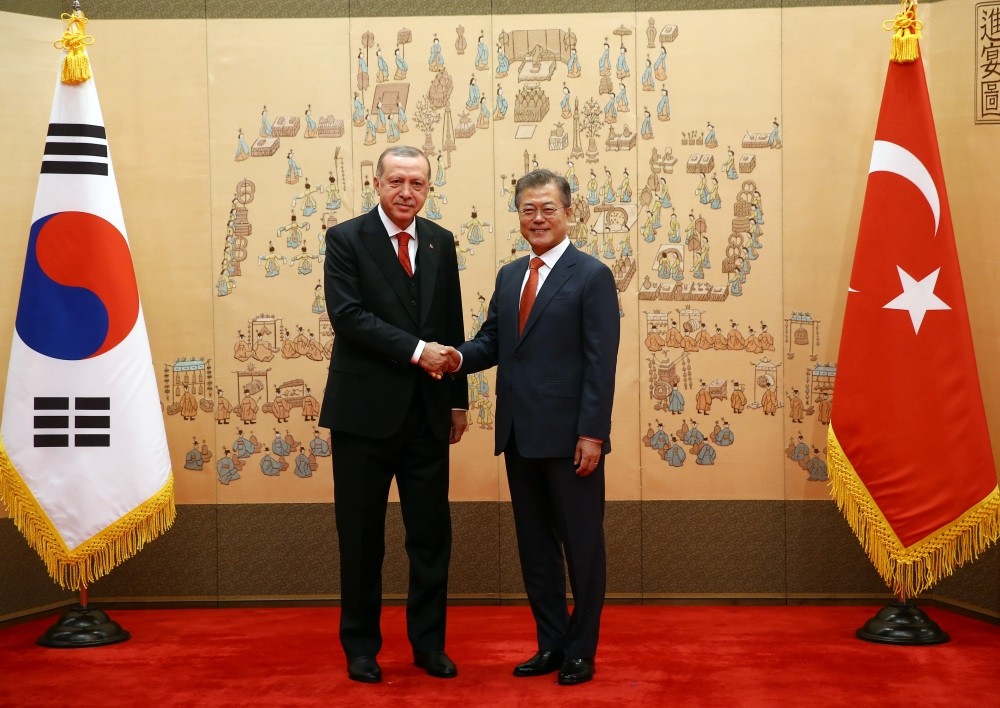 President Recep Tayyip Erdoğan's visit to the Republic of Korea yesterday marked another historic moment in Turkish-South Korean rapport, which has cherished strong economic, political and cultural bonds for the last 60 years. The meeting of President Erdoğan and South Korean President Moon Jae-in once more highlighted the joint commitment to further bolster bilateral ties with respect to regional and global political matters as well as in numerous areas ranging from trade to defense after an official welcoming ceremony and summit. The two-day visit to Seoul makes Erdoğan Turkey's first leader to pay a state visit to South Korea since the countries upgraded bilateral relations to the level of a strategic partnership in 2012. The meeting of the two leaders at South Korea's presidential palace in the country's capital resulted in a joint statement whereby Erdoğan and Moon agreed on close cooperation for successful implementation of Turkey's 2023 Vision.

Marking the centenary of the Republic of Turkey, the 2023 Vision includes specific targets for a full-fledged improvement of the country's economy via tailor-made energy, healthcare, transport and infrastructure projects to make Turkey one of the top 10 global economies. With a gross domestic product (GDP) of $850.7 billion in 2017, Turkey is the world's 17th largest economy, while the country ranks 13th in terms of GDP by purchasing power parity (PPP).

On bilateral issues, the two leaders emphasized the necessity to expand bilateral cooperation on transport, infrastructure and the energy and defense industry sectors.Both leaders also attended a signing ceremony for four bilateral agreements on cooperation in higher education, information, telecommunication, space and satellite technologies, industry and energy and health and medical science.

"The two leaders noted the Turkey-South Korea free trade agreement (FTA) has become an important foundation of mutually beneficial economic cooperation for ensuring balanced growth of trade between the two countries and agreed to quickly implement an agreement on the service industry and the investment sector within the framework of the FTA," the statement release read. Moreover, Erdoğan and Moon were also reported to have reached consensus to amend the Agreement for the Prevention of Double Taxation and expedite the process for signing a marine transportation agreement.

As part of his visit, President Erdoğan delivered a speech at the South Korean Parliament yesterday. During his speech, he elaborated on the long-standing, strong bilateral ties. Regarding his meeting with President Moon, Erdoğan said the meetings have delivered tangible and fruitful results for the improvement of ties.

The president underscored that South Korean investors have so far taken part in the construction of Turkey's mega-scale projects with their Turkish partners and the latest example of this cooperation is the Çanakkale 1915 Bridge, expected to be the world's longest suspension bridge once finished. A consortium of South Koran companies - Daelim, SK E&C and Limak - and Turkey's Yapi Merkezi OGG were contracted to construct the bridge in January 2017.

Erdoğan also stressed that the participation of South Korean companies in Turkey's Kanal Istanbul project will be a source of pride for the country.

Kanal Istanbul envisages the construction of a canal parallel to the Bosporus designed to connect the Black Sea and the Marmara Sea. Recently a 1/100,000-scale route and reserve structure plan for Kanal Istanbul was completed. Once completed, the canal will reduce shipping traffic, particularly oil tanker traffic, passing through the Bosporus Strait. With an estimated cost of TL 65 billion ($16 billion), the project will be 45.2 kilometers long and extend through Istanbul's Avcılar, Küçükçekmece, Başakşehir and Arnavutköy districts.

Turkey and South Korea signed four agreements, Erdoğan said, and indicated that both one-to-one and inter-delegation meetings explored cooperation opportunities in defense and many other economic areas.

The president also highlighted that the MIKTA, which is led by Turkey and South Korea and consists of Mexico, Indonesia, South Korea, Turkey and Australia, is becoming stronger. Both Erdoğan and Moon also stressed the necessity of developing ways to further strengthen MIKTA, which has emerged as a medium-scale empowerment mechanism.

During his speech, President Erdoğan also stressed the urgent necessity to sign a Turkey-South Korea free trade agreement as the two countries aim to become top 10 world economies and the current $7 billion bilateral trade volume is not sufficient to achieve that goal.

Also speaking at the Parliament, South Korean President Moon stressed that as two G20 and MIKTA members, Turkey and Korea must cooperate in international matters and reinforce cooperation with third party countries.

The South Korean president also indicated that the two countries have been improving cooperation in infrastructure, energy, science, technology and defense by deepening their established rapport.

"Within the framework of the fourth industrial revolution, we would like to solidify and deepen our cooperation," Moon added.

As part of his visit to Seoul, President Erdoğan met executives of South Korean SK Engineering Construction (EC) and the automotive giant Hyundai.

Hyundai and SK&EC were among the contractors of the Yavuz Sultan Selim Bridge, and the latter also is currently engaged in the construction of the Çanakkale 1915 Bridge with other South Korean firms and Turkish contractor Limak.

SK&EC was also one of the contractors of the Eurasia Tunnel, an undersea tunnel project that connects the European and Asian sides of Istanbul, with its Turkish partner Yapı Merkezi.

Speaking at the event, Zeybekci said Turkey and Korea are two countries located in very important centers in East and West Asia.

The Republic of Korea has become an important player in technological transformations throughout the world, whereas Turkey is Europe's fastest-growing economy and a country that harbors the most opportunities in the region, the economy minister said.

He also pointed out that Turkey is located in a region where cultures, opportunities and trade routes meet in Europe, the Caucasus, Central Asia, the Middle East and Africa, recalling that Turkey was the leader among the G20 member countries in terms of economic growth last year.

"We believe this growth will continue to increase much more in case of a collaboration of Turkish and Korean firms in the coming years. We believe we will benefit together from the cooperation in the said regions, we will win them together, and achieve important works with the mutual win-win principle," Zeybekci said.

Turkey and Korea are perhaps two of the rare countries complementing each other in the world, he said, indicating that they see there are great opportunities between the two countries.

Five of the world's 10 mega projects are in Turkey as of last year, the minister said, indicating that the country will continue to be a leader in terms of projects.

"The Free Trade Agreement (FTA) between our countries gives South Korea a trade surplus at a very high level. We believe Turkey should be supported in the manufacture of product areas in which it has an absolute advantage in the upcoming period," he added.

Indicating that Africa and the Middle East will be reconstructed in coming years, Zeybekci pointed to opportunities there, saying that Turkish and Korean contracting sectors could easily become leaders in these regions with joint financing and Korean technology opportunities.

Minister Zeybekci added that amendments to existing free trade agreement that include provisions for service exports and investments will take effect very soon.Recalling the partnership of Turkish and South Korean firms in the Çanakkale 1915 Bridge and Karapınar Renewable Energy Resource Areas (YEKA), the minister highlighted that business people in the two countries may improve collaboration in healthcare, defense, communication, pharmaceuticals and transportation.

South Korea's Hanwha Group, in a consortium with Turkey's Kalyon Group, was contracted to construct Turkey's largest solar power plant in the Central Anatolian district of Karapınar at a tender for Renewable Energy Resource Areas (YEKA) in March 2017.

"The role of companies is becoming more important to cement economic relations between the two nations," Trade Minister Paik Un-gyu said during his opening remarks at the business forum where he promised government support in this regard.

Noting that Turkey and the Republic of Korea celebrates the 60th year of diplomatic relations, Paik highlighted that bilateral relations advanced with the FTA between the two countries. He said the two countries fight against rising protectionist trends in global trade with the agreement as he indicated that South Korea's exports to Turkey rose by a factor of five after the FTA, while the country's imports from Turkey has seen a 16 percent increase.

The South Korean minister also pointed out the necessity for cooperation in areas requiring high technology.