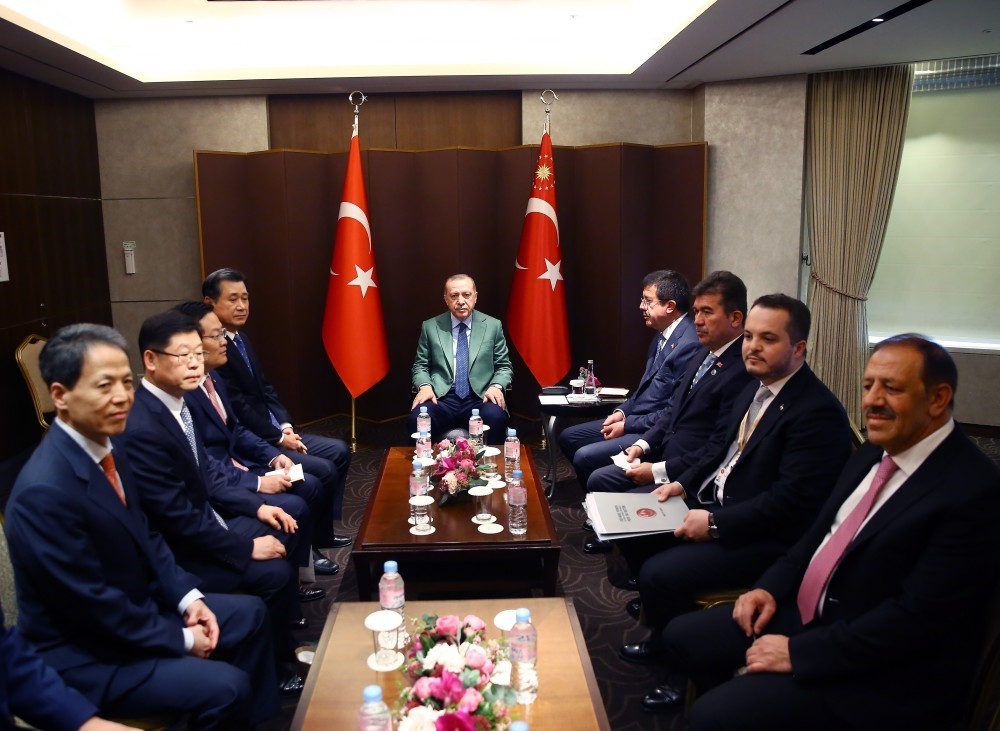 The busy agenda of President Recep Tayyip Erdoğan's visit to the Republic of Korea also involved a series of meetings with top executives of world-renowned South Korean firms, including SK Engineering and Construction (E&C), Hyundai Motors, Samsung, LG, Hanwha Q-cells, Daelim Industrial and GS E&C. Many of these giant companies, which hold an annual market volume totaling trillions of dollars, have serious investments in Turkey and continue to partake in the country's mega-scale projects.

While the president's meetings with these firms have been reported to reinforce Turkey's ties with the South Korean investors, he urged making new investments in other sectors in the country.

During his two-day visit, President Erdoğan held a meeting with executives of South Korean automotive giant Hyundai Motors and SK E&C in which existing investments and future projects of the companies in Turkey were elaborately discussed.

South Korean contractor SK E&C was one of the contractors in the consortiums that built the Eurasia Tunnel, Turkey's first undersea tunnel that connects the European and Asian sides in Istanbul; the Yavuz Sultan Selim Bridge, the third bridge on the Bosporus; Tufanbeyli Thermal Power Plant, a coal plant located in the southern province of Adana and operational since 2016; and the Çanakkale 1915 Bridge, currently being constructed and set to be the longest suspension bridge in the world.

SK E&C executives expressed their interest in the Kanal Istanbul Project, a canal parallel to the Bosporus designed to connect the Black Sea and the Marmara Sea. Recently a 1/100,000-scale route and reserve structure plan for Kanal Istanbul was completed. Once completed, the canal will reduce shipping traffic, particularly oil tanker traffic, passing through the Bosporus Strait. With an estimated cost of TL 65 billion ($16 billion), the project will be 45.2 kilometers long and extend through Istanbul's Avcılar, Küçükçekmece, Başakşehir and Arnavutköy districts.

Hyundai Motors has been operating in Turkey since 1997 with its local partner Kibar Holding. Automobiles manufactured in the company's motor vehicle plant in the northwestern industrial city of İzmit are sold in the Turkish market and exported abroad. In the meeting with Hyundai executives, President Erdoğan was reported to discuss expanding the production capacity of the company and initiating the manufacture of new, more value-added models in Turkey.

On the second of his visits, the president met officials from Samsung Electronics, LG Electronics, Hanwha Q-cells, Daelim Industrial, GS E&C and exchanged views on the current operations of these firms as well as new investment projects they might evaluate.

As part of its operations in Turkey, Samsung Electronics employs more than 500 people. The company opened the Samsung Innovation Center in Istanbul last year. As the last stop of in South Korea, the president visited Samsung Digital City and told company officials the expectation from Samsung to launch the production of value-added products in Turkey.

In partnership with Turkey's home appliance brand Arçelik, LG Electronics has been manufacturing air conditioners in Turkey since 1999, and the company exports 40 percent of its production. In Arçelik's Çerkezköy plant, LG produces television. When discussing LG Electronics investments in Turkey, the executives of the company were also invited to invest in Turkey's chemical industry via LG Chem, LG Group's subsidiary operating in the chemicals sector.

Holding the market leader position in solar panel sales in Turkey, Hanwha Q-cells made its most significant investment in Turkey in March 2017 when the company was contracted for the 1-gigawatt (GW) Konyaa-Karapınar Renewable Energy Resource Areas (YEKA) solar power plant project with its Turkish partner Kalyon Energy. As part of the project, which is estimated to cost $1.3 billion, a solar panel facility with a production capacity of 500-megawatt photovoltaic module and a research and development (R&D) center will be established. During the meeting with the president, new investments opportunities in defense and mechatronics were discussed since the company also operates in these two sectors.Daelim Industrial is one of the contractors of the Çanakkale 1915 Bridge together with South Korea's SK and Turkey Limak and Yapı Merkezi. The Daelim CEO expressed the company's belief that Kanal Istanbul will be accomplished in an effective and fast manner as Turkey's mega projects have been so far thanks to determination and great leadership.

Another South Korean firm, GS E&C, is responsible for the construction of 30 percent of the SOCAR Turkey Aegean Refinery (STAR) together with its Spanish Técnicas Reunidas, Italian Saipem and Japanese ITOCHU partners. The estimated cost of STAR is around $3.5 billion. The firm also constructed some parts of Aliağa, İzmit and Kırıkkale refineries for Tüpraş.

Yenigün indicated that Turkish contractors might work with South Koreans, who have an excellent outlook in technology and finance, in third party markets such as sub-Saharan countries as Turkey has recently opened up to these countries after losing traditional markets such as Libya and Iraq due to wars.