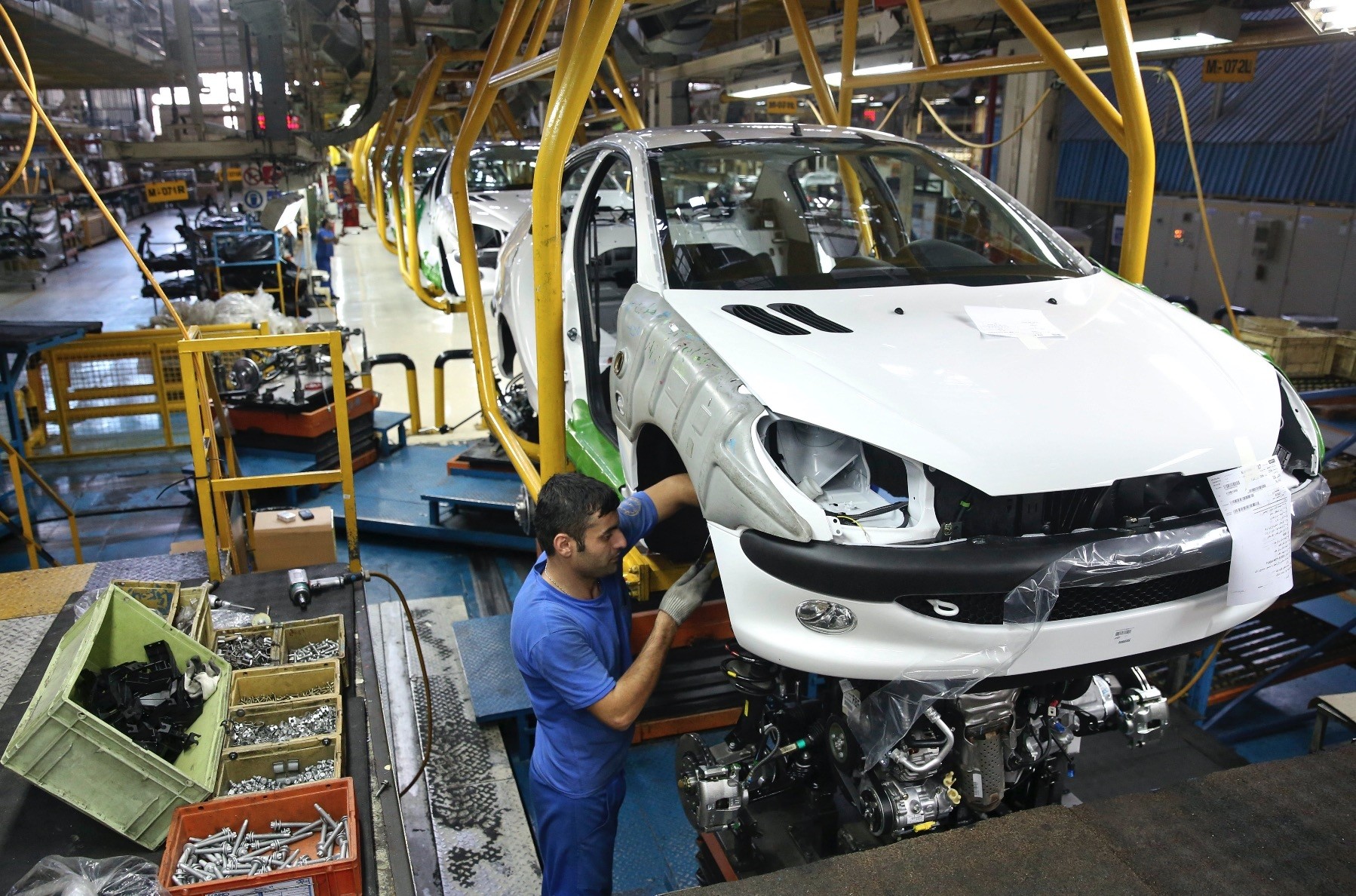 An Iranian worker assembles a Peugeot 206 at the state-run Iran-Khodro automobile manufacturing plant near Tehran, Iran.
by Daily Sabah with Wires May 10, 2018 12:00 am

European firms and leaders have criticized U.S. President Trump's decision to pull his country out of the Iran nuclear deal and expressed their commitment to protecting the investments made in Iran after the deal took effect

U.S. President Donald Trump made a move Tuesday and created an international outcry with voices rising from the other side of the Atlantic, in Europe. While President Trump announced that the U.S. will withdraw from the nuclear deal with Iran, a legacy of the former U.S. President Barack Obama's foreign policy, the European leaders and firms were pondering how to proceed with all the investment plans devised and made after the deal was signed in 2015.

Trump's announcement that the U.S. will impose "the highest level of economic sanctions" on Iran, violating an international nuclear agreement and a United Nations resolution has demonstrated a decisive diplomatic and economic break with U.S. allies in Europe.

The deal the U.S. agreed in July 2015 with its main European partners along with Russia, China and Iran, in which Tehran agreed to significant curbs on its nuclear program in return for sanctions relief. The withdrawal of U.S. triggered reactions in Europe at the state level as German Chancellor Angela Merkel, French President Emmanuel Macron and British Prime Minister Theresa May voiced their concern and regret over Trump's move.

However, the move does not only signify a diplomatic break but also created an economic risk for European firms that rushed to invest in Iran after the nuke deal.

The executive order the U.S. president signed Tuesday allows a three-month or six-month grace period for European firms to get out of existing contacts in the country to avoid any punitive U.S. measures.

European firms doing business in Iran now have a six-month deadline to wind up investments, or risk U.S. sanctions, Trump's advisor John Bolton said. That meant that European firms with investments or operations in the U.S. could be targeted if they continue to trade with Iran.

"U.S. Iran sanctions are hardly hitting any U.S. companies, but aim primarily at European ones," Carl Bildt, the former leader of Sweden who is now co-chair of the European Council on Foreign Relations, said on his social media account.

Richard Grenell, U.S.'s recently appointed envoy to Berlin released an immediate action on his social media account where he wrote, "German companies doing business in Iran should wind down operations immediately." Grenell's statement was seen as a move to fuel trans-Atlantic tension.

Wolfgang Ischinger, a former German ambassador to the U.S., who runs the annual Munich Security Conference, told Grenell he risks antagonizing his host nation on his social media account.

"Ric: my advice, after a long ambassadorial career: explain your own country's policies, and lobby the host country," Ischinger said. "But never tell the host country what to do, if you want to stay out of trouble. Germans are eager to listen, but they will resent instructions."

U.S. Ambassador Grenell's statement created consternation in the German public but he later defended it as "the exact language sent out from the White House." Moreover, plans are already being drawn up in Brussels to introduce measures blocking U.S. sanctions – an extremely rare move against an allied government.

European Union officials said Tuesday that they were making plans to blunt the impact of Trump's withdrawal – presumably helping insulate companies like Total. It was unclear what measures they might have in mind.

"We are working on plans to protect the interests of European companies," Maja Kocijancic, a spokeswoman for the European Commission, told reporters on Tuesday. "At this stage, I am not in a position to offer any further details."

Major European companies including carmaker PSA, plane manufacturer Airbus and Siemens said they were keeping a close watch on relations with Iran after President Trump pulled the U.S. out of a nuclear deal.

Peugeot-manufacturer PSA, one of the big European businesses with operations in the country, said it hoped the EU would adopt a common position on Iran.

"Like other economic players, we are following the evolution of the matter, and are also following the EU's official position on this topic," said a spokesman for PSA, adding that PSA hoped the EU would adopt its own independent position regarding Iran.

Siemens said it would also closely monitor the situation.

"Of course we will always comply with export control regulations, and we would look at how different governments set the rules. We have a firm grip on our position," added Thomas.

The Federation of German Industries, or BDI, said it rejects "the extraterritorial application of sanctions" and called upon the EU to find a solution to protect European companies from the "unlawful and unilateral" application of U.S. sanctions.

BDI said German firms do not want to jeopardize business with the U.S. so there's an "urgent need to effectively protect our companies from the effect of U.S. sanctions."

France, which has had close business ties with Iran since before the fall of the Shah in 1979, has sought to deepen trade ties since sanctions against Iran were lifted in 2016.

Shares in Renault, PSA and Airbus all fell yesterday, although Total's share price climbed higher, as oil prices rose in the wake of Trump's move to pull the U.S. out of the Iran nuclear agreement deal.

European plane-maker Airbus says it will abide by renewed U.S. sanctions on Iran but that it could take "some time" to determine the full impact of the American decision on the aviation industry's plans to sell billions of dollars' worth of planes to Iran.

Airbus and rival Boeing are among the biggest companies affected by Trump's decision to pull out of a landmark 2015 accord on curbing Iran's nuclear activities.

U.S. Treasury Secretary Steven Mnuchin has said that licenses held by Airbus and Boeing to sell jetliners to Iran will be revoked, but that certain exemptions will be negotiated.

Boeing has yet to deliver any aircraft to Iran under those deals and said that it will "continue to follow the U.S. government's lead."

So far, French oil company Total SA has been the most aggressive Western oil company to move back into Iran, signing in July a $5 billion, 20-year agreement with Iran. A Chinese oil company also has a deal to develop the country's massive South Pars offshore natural gas field.

French exports to Iran doubled in 2017 to 1.5 billion euros ($1.78 billion), driven by the export of jets and aircraft parts, as well as automobile parts, according to customs data. Total trade between France and Iran hit a nine-year high last year of 3.8 billion euros.

French Foreign Minister Jean-Yves Le Drian said on RTL radio that "the risks of confrontation are real" after U.S. President Donald Trump's decision to pull out of the landmark agreement.

Le Drian said, "We are ready to work on a widened accord" that would address Trump's concerns about the 2015 deal aimed at curbing Iran's nuclear ambitions. He said he and his British and German counterparts will meet Monday with Iranian representatives to discuss next steps.

Defense stocks surge as US pulls out Iran nuclear deal

Shares of major U.S.-based defense and defense technology companies saw a rally as President Trump was making statements to withdraw from the Iran nuclear deal and announcing new and more expansive economic sanctions.