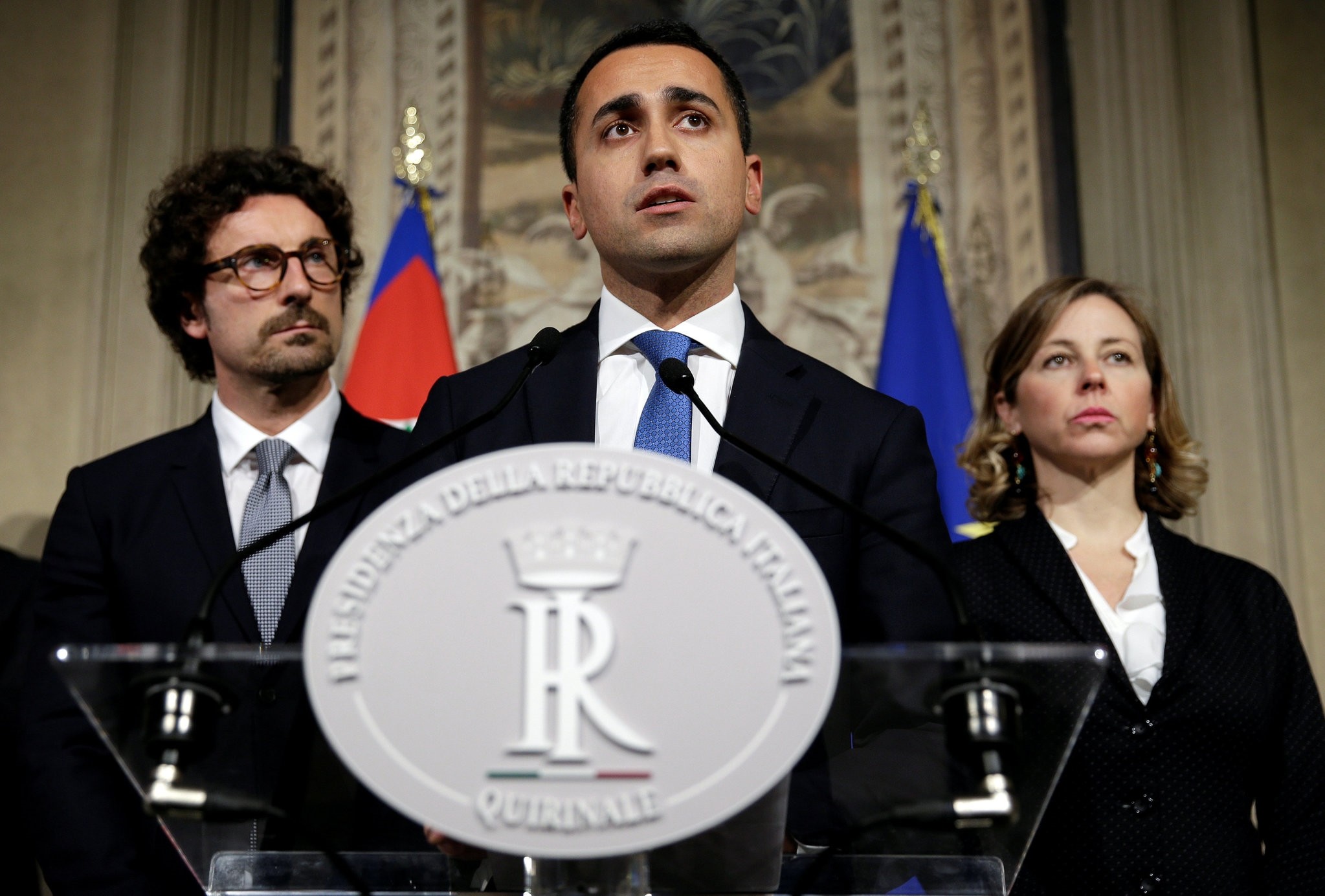 The Italian coalition taking shape 10 weeks after March's inconclusive election has made economic promises that seem incompatible with Europe's fiscal rules and will be hard, if not impossible, to keep.

These include slashing taxes for companies and individuals, boosting welfare provision, cancelling a scheduled increase in sales tax and dismantling a 2011 pension reform which sharply raised the retirement age.

The marriage being sealed between the anti-establishment 5-Star Movement and the far-right League was seen as an unlikely and worrying prospect by most analysts before the March 4 election ended in a hung parliament.

The pre-election adversaries have spent the last few days trying to fuse their very different programs into a "contract" of mutually acceptable policy commitments. What they have in common is that they are extremely expensive.

On the face of it their plans, which they say may also include a form of parallel currency, could push the budget deficit far above targets agreed with the EU, setting up a clash with the European Commission and Italy's partners.

"We will need to renegotiate EU agreements to stop Italy suffocating," League leader Matteo Salvini said on Saturday after a day of talks with his 5-Star counterpart Luigi Di Maio.

5-Star's flagship policy of a universal income for the poor has been cost at around 17 billion euros ($20 billion) per year. The League's hallmark scheme, a flat tax rate of 15 percent for companies and individuals, is estimated to reduce tax revenues by 80 billion euros per year.

Scrapping the unpopular pension reform would cost 15 billion euros, another 12.5 billion is needed to head off the planned hike in sales tax, and the parties are also considering printing a new, special-purpose currency to pay off state debts to firms.

"If implemented, it would be the biggest shake-up of the Italian economic system in modern times," said Wolfgang Munchau, head of the London-based Eurointelligence think-tank.

Some of the parties' negotiators now suggest a more pragmatic approach will probably prevail, by implementing their pre-election proposals only partially and gradually. In the face of voter disappointment, each group will be able to say it was forced to compromise with its partner.

Even so, it is still unclear how all this will square with Italy's commitments to reduce its budget deficit and its public debt, which at more than 130 percent of gross domestic product, is the highest in the euro zone after Greece.

Growing signs of an economic slowdown will make the new government's task even harder. Industrial output stagnated in the first quarter and business confidence fell in April to a 14-month low.

Before the election, 5-Star and the League both blamed the EU's fiscal rules for Italy's chronically weak growth and rising poverty, and promised to defy Brussels by spending more if they managed to enter government.

They are now using less strident tones, and a 5-Star official said on Friday any plans to raise the budget deficit will first be discussed with Brussels in a "courteous" way.

The outgoing centre-left administration promised the fiscal deficit would fall this year to 1.6 percent of GDP from 2.4 percent in 2017, and then decline to 0.8 percent next year with a balanced budget in 2020.

5-Star leader Di Maio said just before the election he would hold the deficit at 1.5 percent, having previously pledged to raise it above the EU's 3 percent ceiling to allow extra spending on public investments. His latest position is still not consistent with Italy's commitment to balance its budget, and also out of line with the more confrontational stance of the League.

"The goal to balance the budget has destroyed our economy," said League senator Alberto Bagnai, a eurosceptic economist.

The League wants to raise the deficit to 2.8 percent this year and to 3.0 percent in 2020. Bagnai said negotiation would be needed to find common ground on the matter with 5-Star.

Wolfango Piccoli, co-president of Teneo Intelligence, said taking on Brussels would be popular with Italian voters, and the new government had little to fear from a European Commission which "is very weak and on its way out".

The Commission, with just a year of its term remaining, "can't really do much other than put Italy's finances under greater scrutiny, and markets don't care about that", he said.

So far, market reaction has been muted in response to what some analysts described before the election as the "nightmare scenario" of a 5-Star/League government.

The gap between Italian benchmark bond yields and the safer German equivalent reached its widest in seven weeks last week on news that a deal was at hand, but it had narrowed again by Friday and shows no sign of getting out of hand.

Francesco Galietti, head of the Policy Sonar political risk consultancy, described the nascent coalition's economic policies as "a pretty spicy dish", but he said investors were pleased to see that Italy was managing to form a government.