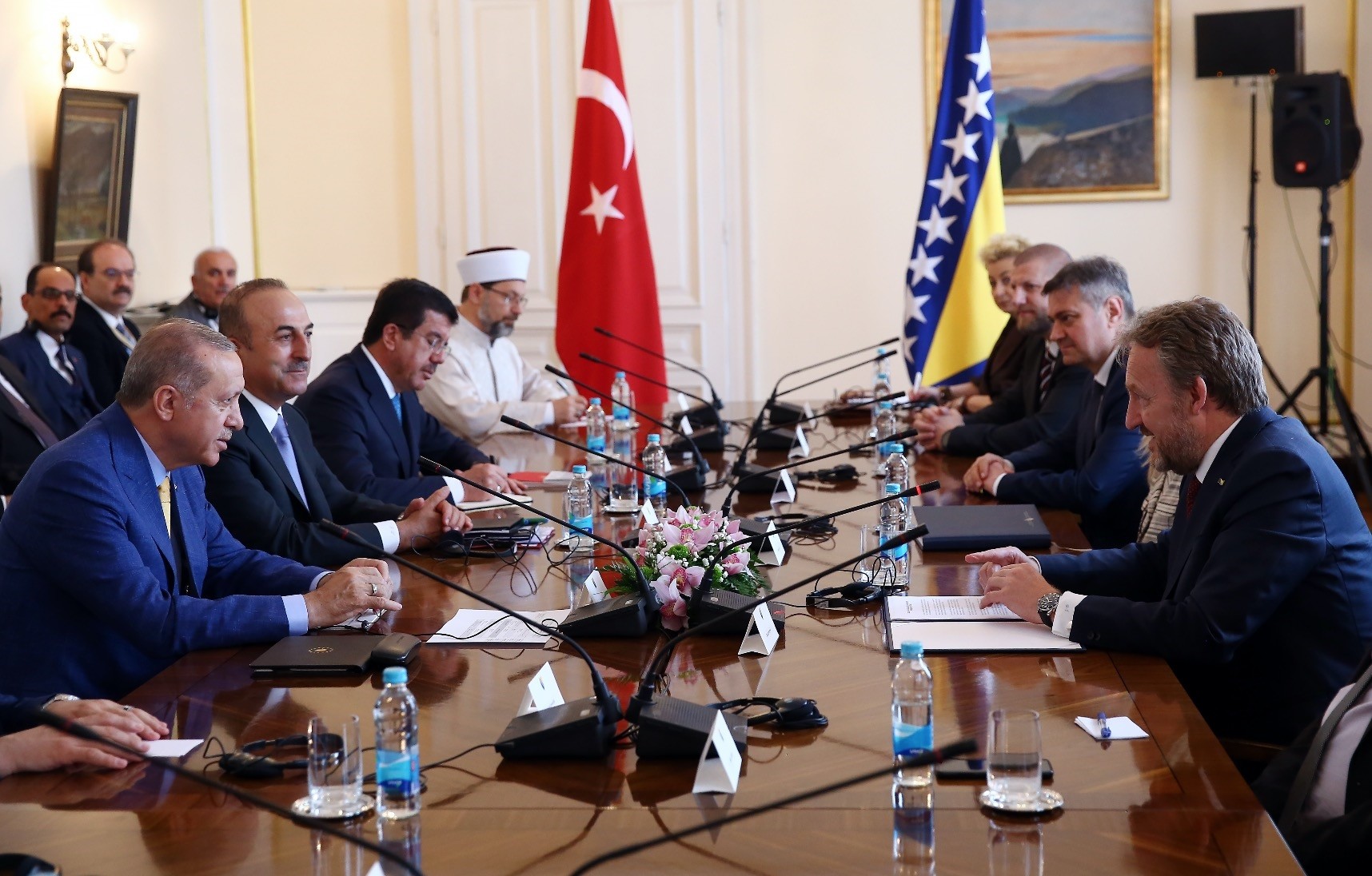 President Recep Tayyip Erdou011fan held a one-on-one meeting and inter-delegation talks with Bakir Izetbegovic (R), the Bosniak member of the tripartite Presidency of Bosnia-Herzegovina, during his visit to the country, May 20.
by Daily Sabah with AA
May 24, 2018 12:00 am

President Erdoğan's visit to Bosnia-Herzegovina on May 20 is expected to pave the way for new investments, while also increasing the bilateral trade volume between the two countries, which has grown nine-fold in 15 years

President Recep Tayyip Erdoğan's visit to Bosnia-Herzegovina on May 20 is expected to stimulate investments between the two countries, as well as boosting the trade volume.

Erdoğan held a one-on-one meeting and inter-delegation talks with Bakir Izetbegovic, the Bosniak member of the tripartite Presidency of Bosnia-Herzegovina in the capital of Sarajevo. The visit included discussions on regional and international issues, as well as the economic relationship between the two countries.

During the meeting between the two leaders, the target to increase the bilateral trade volume to $1 billion was on the agenda, while it was stated that signing of the free trade agreement (FTA), which is currently being updated, as soon as possible is also of great importance.

As a result of evaluations that were carried out, it was agreed that Turkey will import 13,000 tons of meat products annually from Bosnia-Herzegovina during a five year period starting as of July 1.

He remarked that Turkish companies created an imp

ortant source of employment in the country. "Of course we are satisfied that our mutual trade has increased over the years, but when we consider the strong historical, cultural and human ties between the two countries, we see that this data does not reflect our potential."

Çilek said that the updating of the FTA is very important for the increase of the bilateral trade volume and that the Bosnia-Herzegovina-Serbia Trade Office opened in Istanbul's Zeytinburnu district will also contribute to this.

Speaking of the meat imports that came to the agenda with the visit of President Erdoğan, Çilek said as a result of the talks, it was decided that Turkey will import meat from Bosnia-Herzegovina for five years.

"I believe this development is important as both high quality and affordable meat will come to Turkey, it will contribute to the development of animal husbandry in Bosnia-Herzegovina in the long-term and in terms of Turkish firms carrying out investments in this field," he said.

Bosnia-Herzegovina has a developing market, Çilek said, indicating that there are many projects in the country to trade and invest in, establish partnerships for and open up to third markets.

"Besides advantages such as joint history and culture, investment and cooperation potentials in the country and its critical location for access to European markets, incentives that are provided for the trade and the investment development between Turkey and Bosnia-Herzegovina are important opportunities for our Turkish firms," he added.

Political and economic relations between the two countries are at a "perfect" level, Çilek said.

"I would like to emphasize that this climate should be evaluated by our firms. Necessary conditions for both trade and investment are provided. Many ready projects are awaiting their investors. Official representatives of the two countries also support the cooperation to be established. Funds of the European Union and Turkish Eximbank's loans can be evaluated for investments. Besides, I would like to state that, as a Turkish bank, Ziraat Bank in Bosnia-Herzegovina has made very important contributions to Turkish companies' access to loans and finance. Now is the right time to do business in Bosnia-Herzegovina," Çilek added.

An agreement in January was reached on the Sarajevo-Belgrade Highway project, planned to be built between Bosnia-Herzegovina's capital of Sarajevo and Serbia's capital of Belgrade with Turkey's support.

The Belgrade-Sarajevo Highway will be the "elixir of regional peace," President Erdoğan had said during a joint press conference with Izetbegovic.

"The Belgrade-Sarajevo Highway has an estimated cost of 3 billion euros and Turkey is a partner to the project along with Serbia and Bosnia-Herzegovina. The cost of the project will be partly provided by Eximbank and Turkish contractors will also contribute to the financing of the project," Erdoğan had explained.

Bosnian leader Izetbegovic also said that a memorandum of understanding for the tender process of the project was signed yesterday and stressed the Bosnian support for the tripartite mechanism to build the highway.

The project is planned to be built by Turkish firms using domestic labor through a build-operate-transfer (BOT) model. The highway is expected to make a major contribution to the development of both economic relations and trade between the two countries, as well as to regional stability.

TRADE VOLUME WITH BOSNIA-HERZEGOVINA UP 9-FOLD

Declaring its independence from Yugoslavia in 1992 and mired in war until 1995, Bosnia-Herzegovina has created an industry-based economy which made progress investments in service, banking, energy and tourism sectors.

According to the information compiled from the Economy Ministry, the gross domestic product (GDP) of the country at nominal values reached $17.5 billion in 2017. Furthermore, 7.8 percent of Bosnia-Herzegovina's GDP consist of agricultural production while industry and services make up 26.8 and 65.4 percent, respectively.

The exports of the country were recorded at $6.4 billion last year while the imports reached $10.4 billion. Half of the foreign trade is done with European Union countries. According to the 2017 data, Turkey has a 3.7 percent share in Bosnia-Herzegovina's exports and 4.2 percent share in the country's imports, making Turkey the seventh largest trade partner of Bosnia-Herzegovina.

The bilateral trade volume between Turkey and Bosnia-Herzegovina was calculated at $71.6 million in 2003 when a FTA took effect. Since then, the bilateral trade volume has increased by nine-fold and reached $617.6 million. Last year, Turkey's exports to Bosnia-Herzegovina were $348.7 million while the value of imports from the county stood at $269 million.