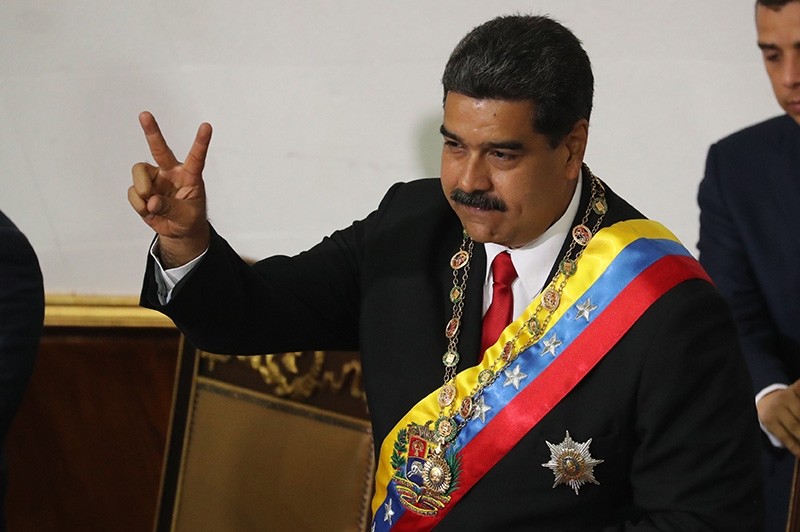 The president of Venezuela, Nicolas Maduro, takes the oath before the National Constituent Assembly (ANC), in Caracas, Venezuela, May 24, 2018. (AP Photo)
by Daily Sabah with Agencies May 24, 2018 12:00 am

Newly re-elected Venezuelan President Nicolas Maduro pledged Thursday to boost oil production and open dialogue with business leaders, saying he alone is not to blame for the country's economic woes.

The successor of the late Hugo Chavez, Maduro on Sunday won a second six-year term in office, at a time when the oil-rich nation is suffering from increasingly dire food shortages, health crises, and mass emigration.

Presenting his credentials at the Constituent Assembly on Thursday, Maduro criticized the U.S. as trying to sabotage him and said opponents, who refused to accept Sunday's election results, were wrong to blame him for Venezuela's crisis.

The U.S. slapped Venezuela with additional economic sanctions after Sunday's contested vote. Maduro said the sanctions would cause "great difficulties," but the country would overcome them.

"It's a stupid simplification to think that this problem is due to Nicolas Maduro. It's a problem of the entire country," he said in a speech, wearing a sash in the yellow, blue and red colors of the Venezuelan flag.

Maduro, a former bus driver and union leader, also cautioned he alone would not be able to turn around the economy.

"Only the people can save the people ... Who will save us? Superman? Or Super-Nico?" he asked, playing off his first name. "Neither exist, but we do have a Super-People."

Maduro promised to increase Venezuela's oil production by 1 million barrels-per-day this year. He said he had instructed Major General Manuel Quevedo, the oil minister and president of state oil company PDVSA, to reach out to OPEC, allies China and Russia, and Arab nations for help if needed.

Maduro also announced the release of people jailed on charges of inciting violence during anti-government protests as part of a policy of "pacification" and "reconciliation."

More than 300 people are in jail on charges of inciting violence during the 2014 and 2017 protests, according to the organization Venezuelan Penal Forum, which regards them as political prisoners. The protests left a total of more than 160 people dead.

"I want a policy of pacification, of meeting again and of national reconciliation," Maduro said, calling on those who were involved in the violence to engage in a peaceful "political fight."

Maduro was sworn in Thursday as president-elect at a session of the Constitutional Assembly, months before he's due to formally take the oath of office next year for a second term on Jan. 10.

Electoral authorities have certified a landslide victory for the socialist leader in Sunday's vote. After opposition and some foreign governments decried the vote as illegitimate, the U.S. served up fresh sanctions and a dozen Latin American nations promised diplomatic and financial response.