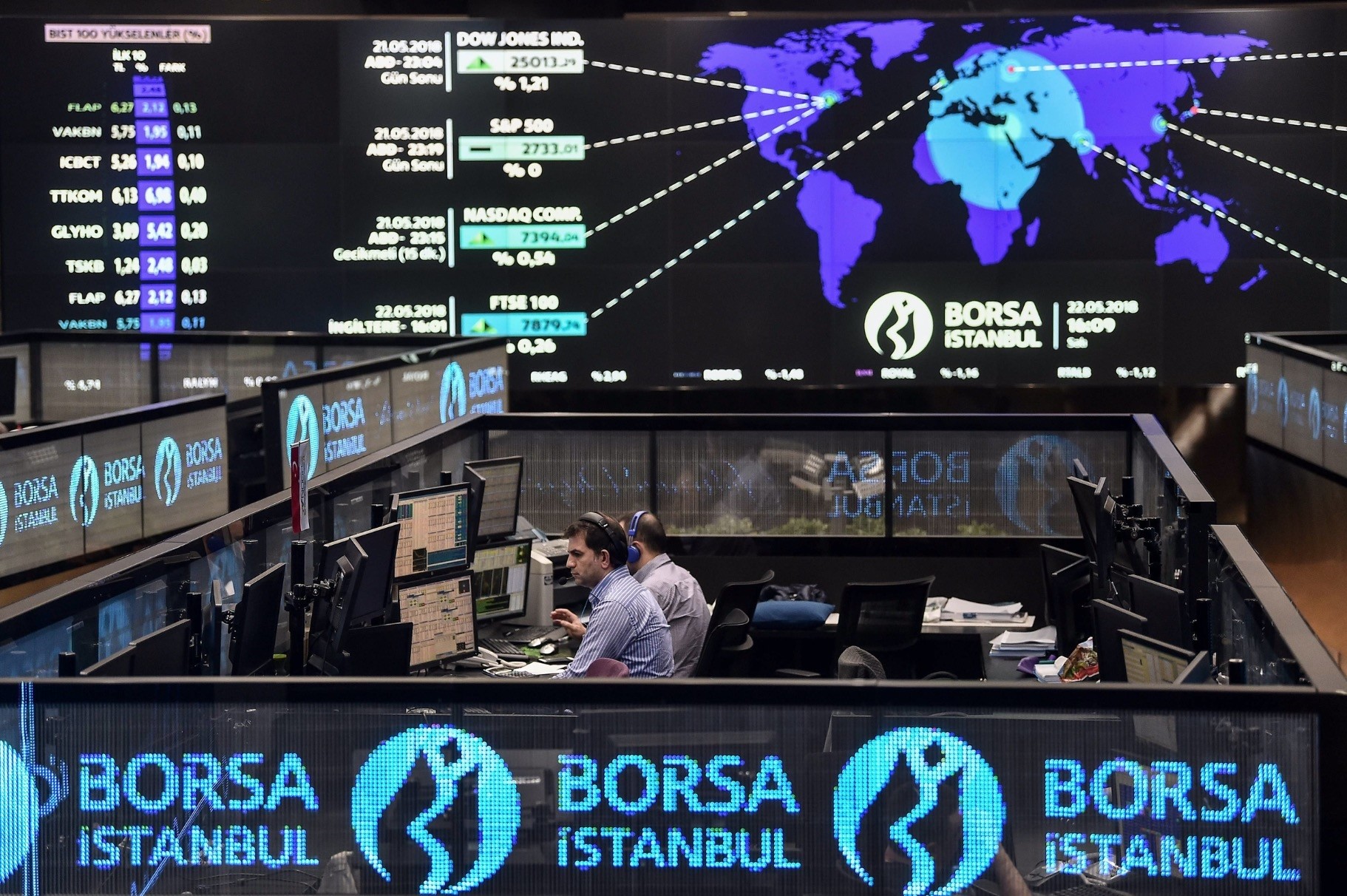 Turkey will remain dedicated to the rules and principles of a free market economy in monetary policies, a commitment reiterated by President Erdoğan and government officials following the Turkish central bank's decision to hike rates to halt the plunging lira

In order to stem the slide in the Turkish lira, which fell to 4.93 against the U.S. dollar on Wednesday, the Central Bank of the Republic of Turkey (CBRT) raised the late liquidity window by 300 basis points to 16.5 percent from 13.5 percent after an extraordinary meeting of its monetary policy committee. The bank kept other rates unchanged, describing the move as a "powerful monetary tightening" policy and saying it's ready to continue using all instruments.

Following the CBRT's decision, President Recep Tayyip Erdoğan has reiterated Turkey's commitment to follow free market rules and institutions and emphasized that the country will abide by global governance principles on monetary policy, reassuring markets and investors. With these developments, the lira reversed losses after plunging earlier as much as 5.2 percent to a record low. Upon the CBRT's move, the lira recovered to 4.55 against the U.S. dollar and 5.33 against the euro after the day's record lows of 4.93 and 5.74, respectively.

At the beginning of the year, the dollar/Turkish lira rate was 3.78 while the average rate was 3.65 last year.

Speaking at a ceremony in Ankara yesterday, in which Justice and Development Party (AK Party) announced its declaration for June 24 elections, President Erdoğan once again reiterated that the government will decisively work to narrow the current account deficit.

"The main goal is to keep inflation at single digits. We will take measures to lower cost pressures. Instruments for currency liquidity will be deployed when necessary," the president said. He also stated that a mechanism to manage corporate debt in foreign currency will be established.

"We will maintain an economic structure based on the free market," Erdoğan pledged, referring to the post-election program.

The consecutive losses in the lira in May came as a result of the current account deficit pressures, fiscal expansion and widening budget. Since the country is financing the current account deficit by investments from abroad, investors who expect higher returns on their investments have been selling their TL-denominated assets, which in the end cause major losses in the currency. Therefore, the statements that back the CBRT's decision, policies to mitigate inflationary risks and currency account deficit, are what the markets expected.

In that regard, President Erdoğan's statements were perceived as an address to the markets. Moreover, another comment from Deputy Prime Minister Mehmet Şimşek, who is in charge of the economy, also highlighted the support for the central bank's decision.

"The central bank's governor [Murat Çetinkaya] and members of the monetary committee have my full backing in doing what's necessary to stem the slide in lira and achieve price stability," Şimşek said on his official social media account. "Turkey has fixed problems in the past and will do it again."

Minister Şimşek also underscored that none of Turkey's macroeconomic problems are insurmountable and the Turkish government "is committed to maintaining fiscal discipline, accelerating structural reforms, including macroprudential measures to reduce the current account deficit and help the central bank's disinflation efforts."

In 2017, Turkey's current account deficit hit 47.1 billion according to data from the central bank. The country's budget deficit/GDP ratio was around 1.5 percent, which was below the targets noted in the country's medium-term program.

According to the medium-term program, the budget deficit/GDP ratio target is 1.9 percent this year, 1.8 percent next year and 1.6 percent in 2020.

The government will pertinaciously continue its fiscal discipline, Finance Minister Naci Ağbal said yesterday, suggesting that the government is committed to meeting budget targets for 2018 and will take the necessary steps in this regard.

"Our main target is the continuation of public finance in accordance with the financial discipline in the medium term. Fiscal policy will support the monetary policy. For this, we will establish a tight fiscal policy," the minister said. He added the government will not make taxation adjustments that cause inflation.

Turkish businesses have welcomed the CBRT's move to halt the depreciation of the Turkish lira by raising the late liquidity window interest rate.

While Turkish business representatives approved the bank's move, they have also called for fiscal tightening.

Turkish Exporters Assembly (TİM) Chairman Mehmet Büyükekşi said that the association continues to believe in the Turkish lira and uses it in foreign trade.

The central bank's Monetary Policy Committee's interest rate decision was the right one, he stressed.

"If required, similar steps should be taken in the coming days," he added.

Tuncay Özilhan, the president of the TÜSİAD High Advisory Council, said the CBRT needed to take steps independently to fight against inflation.

"We welcomed the prime minister's and president's speeches aimed at fiscal tightening and stability after the bank's move," he said.

Although rate hike has been supportive for the lira, the dollar/Turkish lira exchange rate was still volatile yesterday with an upward trend. The dollar opened the trading session yesterday at 4.70 and was trading around 4.77 at 4:28 p.m. local time.

With this picture in the background, analysts underscore the necessity for additional measures to tackle the current account deficit and inflationary pressures.

Referring to the early gains in the Turkish lira, Enver Erkan, a research expert at GCM Forex, said the important factor to monitor is the development of pricing mechanism in the market and noted the volatility in yesterday's session, which might continue in the near-term.

"The markets probably did not find the central bank

's rate hike adequate since the Turkish lira could not continue to retain gains," he said and added that if the lira continues its negative trend and swamped in volatility, the CBRT might need another emergency meeting before June 7. Erkan underscored that the CBRT should preserve an active role to protect.

"The best action the bank might take is to introduce simplification of the monetary policy. The simplification will create a positive impact on tightening, predictability and credibility," he said.

He also underscored that the statements from the government regarding Turkey's commitment to the free market rules are the kind of messages investors want to hear and pointed out the importance of Deputy Prime Minister Şimşek and CBRT Governor Çetinkaya's meeting in London in the upcoming days.

QNB Finansinvest Chief Economist Burak Kanlı said the volatility in the U.S. dollar/Turkish lira exchange rate in yesterday's session stemmed from the moves of local investors and the demand of local corporations.

The recent developments in the currency rates have deeply affected companies with foreign currency debt. The fall in the dollar after CBRT's decision might have been sees as an opportunity to compensate for open positions.

Kanlı also stated that CBRT's decision was perceived positively by the markets. However, investors' concerns over the recent economy decisions and the economic policies that will be implemented in the post-election period have distorted the perception of the Turkish economy, which affected the weakness in the Turkish lira. Therefore, gains of the lira do not seem permanent, he added.

"But investors ask for an independent central bank that implements a simplified interest rate framework and takes decisions ahead of the market," Kanlı stated, drawing attention to the necessity of a fiscal policy focusing on budgetary discipline aiming to boost investments and productivity, not inflation.

Recalling the supportive statements from the government concerning the dedication to free market, Kanlı said this discourse conveys two messages for the post-election period. The first is the government's commitment to free market economy and an independent central bank. He added that the market would want to see concrete steps for the structural reforms in the post-election period.

U.S.-based investment banking giant Goldman Sachs said the 300-base points interest rate hike of the CBRT will only compensate for the depreciation of the Turkish lira since the bank's last monetary policy committee meeting on April 25. Goldman Sachs highlighted that the effectiveness of the central bank's move could be rendered permanent and stable by the support of the fiscal policies and the market expects another hike from the CBRT at its scheduled meeting on June 7.

Wells Fargo Currency Analyst Erik Nelson said that without more concrete and sustained signs of central bank commitment to bringing down inflation, the Turkish currency will likely remain under pressure going forward and emphasized that more commitment to deal with high inflation will be needed over the longer term.

Wells Fargo estimates that the U.S. dollar/Turkish lira rate will end the second quarter at 4.3, citing some upside risks.

Commerzbank analyst Tatha Ghose said in a report yesterday that in the medium term, rate hikes are not likely to help the lira, given the still-widening current account deficit and apparently low sensitivity of inflows to interest rates.