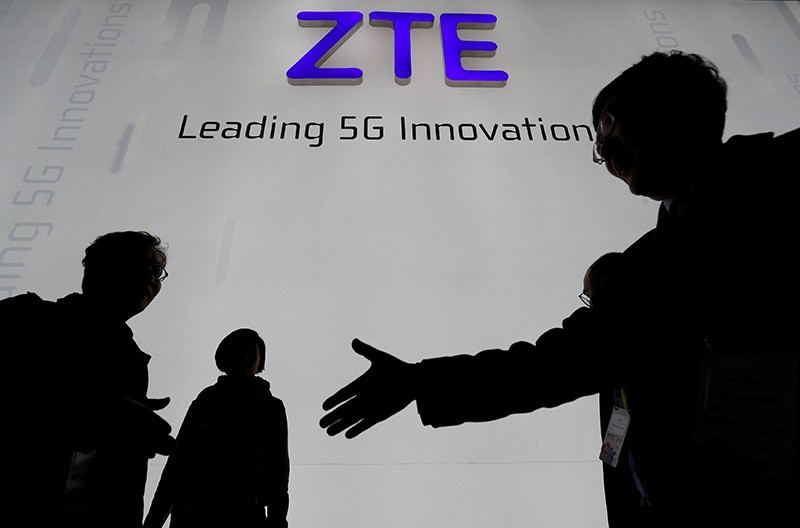 Visitors pass in front of the Chinese telecoms equipment group ZTE Corp booth at the Mobile World Congress in Barcelona, Spain, Feb. 26, 2018. (Reuters Photo)
by Compiled from Wire Services
May 25, 2018 12:00 am

The Trump administration told lawmakers that the U.S. government has reached a deal to put Chinese telecommunications company ZTE Corp back in business, a senior Congressional aide said Friday.

The deal, communicated to officials on Capitol Hill by the Commerce Department, requires ZTE to pay a substantial fine, place American compliance officers at the company and change its management team, the aide said. The Commerce Department would then lift an order preventing ZTE from buying U.S. products.

The White House did not immediately confirm the deal.

"We'll let you know when we have an announcement on that front," spokeswoman Sarah Sanders said.

ZTE was banned from buying American technology components for seven years for violations of sanctions against Iran and North Korea. The Commerce Department decision would allow it to resume business with U.S. companies, including Qualcomm Inc., the chipmaker that is a key ZTE supplier.

News of the deal comes a week before U.S. Commerce Secretary Wilbur Ross is scheduled to visit China for another round of talks amid ongoing trade frictions between the world's two largest economies.

Within the Commerce Department, and in U.S. business circles, the U.S. penalty against ZTE was widely seen as based on clear evidence of a company knowingly flouting U.S. regulations - separate from the highly politicized trade row, the sources said.

But U.S. President Donald Trump's reversal surprised and frustrated many U.S. officials, who had viewed the penalty on ZTE as final and not open to appeal.

The decision on ZTE could have a significant impact on shares of American optical components makers such as Acacia Communications Inc and Oclaro Inc, which fell when U.S. companies were banned from exporting goods to ZTE.

The U.S. government launched an investigation into ZTE after Reuters reported in 2012 the company had signed contracts to ship hardware and software worth millions of dollars to Iran from some of the best-known U.S. technology companies.

ZTE relies on U.S. companies such as Qualcomm Inc, Intel Corp and Alphabet Inc's Google. American companies are estimated to provide 25 percent to 30 percent of components in ZTE's equipment, which includes smartphones and gear to build telecommunications networks.

Washington and Beijing had been proposing tens of billions of dollars in tariffs in recent weeks, fanning worries of a full-blown trade war that could hurt global supply chains and dent business investment plans.