Italian markets plunge, dragging Europe down with them 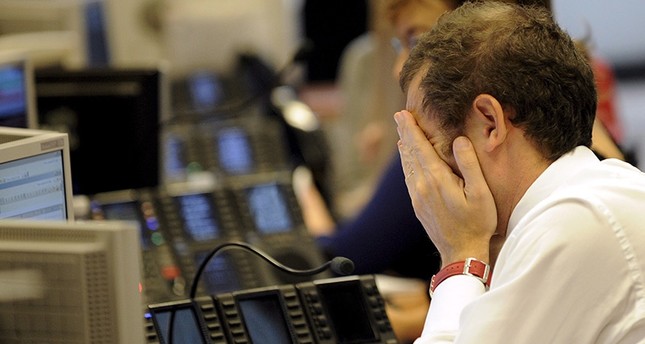 A trader covers his face with his hands at the stock exchange in Milan, Italy on Oct. 8, 2008. (EPA Photo)
Related Articles

Italian two-year bonds nose-dived this week amid a ballooning political crisis now headed for early elections, frightening investors across Europe over a renewed risk of the eurozone breaking up.

Italy's two-year debt yields soared above 2 percent to levels not seen since 2013, while the rate on 10-year notes surged to 2.91 percent, the highest point in four years.

Italy's main stock index extended early losses to sink to a 10-month low, down 3 percent, by 08:40 GMT. Bank shares slumped another 4.8 percent to a fresh 13-month low, bruised by a sell-off in Italian government bonds, a core part of the banks' portfolios.

The index was set for its worst daily loss in 21 months as trade in some banks was halted due to excessive losses.

The head of Italy's central bank said any move to weaken the country's public finances could undermine confidence and years of valuable reforms.

Italy's president set the country on a path to fresh elections on Monday, appointing a former International Monetary Fund official as the interim prime minister with the task of planning for snap polls and passing the next budget.

After inconclusive elections in March, two anti-establishment parties dropped a coalition plan over the weekend after the president vetoed their choice of a eurosceptic to become economy minister.

"One has to be concerned about forced selling flow in reaction to the price action," strategist Antoine Bouvet of Mizuho International Plc was quoted as saying by Bloomberg. "It is in Five Star's and the League's interest to benefit fully from [President Sergio] Mattarella's opposition by keeping a united front so there should be limited solace to be found in the near term from news flow."

The pan-European STOXX 600 fell 1.6 percent, with banks the worst-performing. The eurozone's banks index sank 4.3 percent and was on track for its biggest monthly drop since the Brexit vote in June 2016.

The stress in Italy spread to other peripheral eurozone markets, with Spanish and Portuguese bank stocks firmly in the firing line. Portuguese 10-year bond yields jumped as much as 32 basis points to 2.40 percent and Spanish yields rose five points to 1.58 percent.

JP Morgan analysts repeated their earlier call for investors to move out of Italian equities and into Germany. German Bunds have been acting as a safe haven for investors, with yields on the eurozone benchmark bond falling, but Germany's DAX was still shedding 1.8 percent as investors fled risky assets.

Share on Facebook Share on Twitter
Previous in Economy When George R. Roberts made his fortune in the freewheeling 1980s,... Next in Economy The United States said on Tuesday that it will continue pursuing action...
DAILY SABAH RECOMMENDS