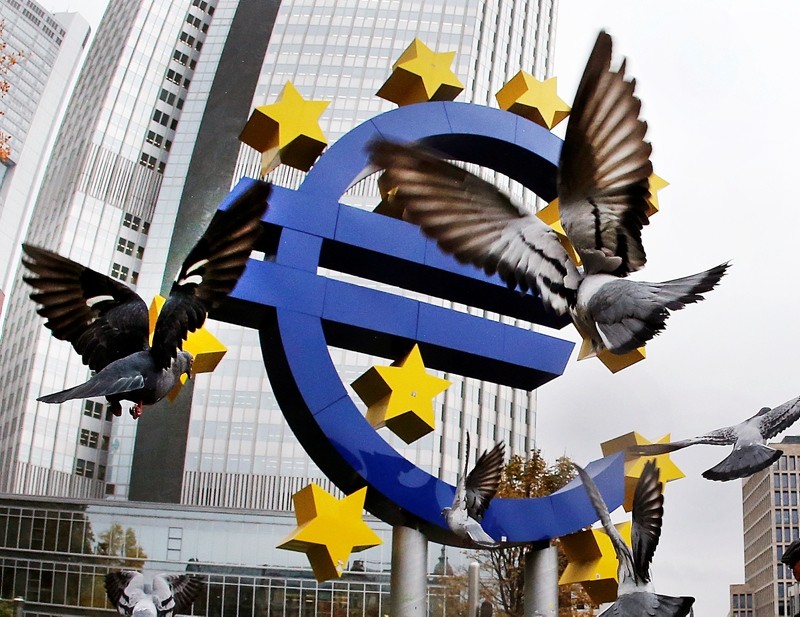 The arrival of an anti-austerity, populist government in Italy has revived concerns about the country's massive debt pile, underscoring the pitfalls ahead for the European Central Bank as it tries to wean the eurozone off its massive monetary support.

"It's the elephant in the room, because the problem was never resolved," said Pictet Wealth Management economist Frederik Ducrozet, noting that Italy was the only "highly indebted" euro nation not to embark on a structural reforms program.

After a political rollercoaster ride that sent markets into a spin this week, a coalition government between the far-right League party and the anti-establishment Five Star Movement is to be sworn in Friday.

While immediate fears that the eurosceptic parties could yank Italy out of the single currency have been calmed with their pick of a pro-euro economy minister, the drama in the eurozone's third-largest economy is far from over.

Both parties came to power promising tax cuts and higher spending -- in a country already saddled with 2.3 trillion euros ($2.7 trillion) of debt and plagued by low growth.

At 132 percent of gross domestic product (GDP), Italy's debt burden is second only to bailed-out Greece, and more than double the European Union's 60-percent ceiling.

The near-collapse of the two populist parties' efforts to form a government and the prospect of snap elections sent Italian bond yields spiking in recent days, making it more expensive for the government to borrow money.

The bond market turbulence spread to Spain and Portugal, prompting the Frankfurter Allgemeine Zeitung to warn of "contagion danger" that could send Italy's debt woes spiraling out of control, dwarfing the Greek debt crises and posing a threat to the single currency in the long run.

That doomsday scenario appears to have been averted for now, and Italian yields fell on Friday as investors heaved a sigh of relief over the deal clinched in Rome -- a welcome birthday present for the ECB on the day the Frankfurt institution celebrates its 20th anniversary.

The markets' anxiety about Italy comes at a sensitive time for the ECB, the eurozone's chief firefighter in a financial crisis.

After years of ultra-loose monetary policy aimed at bolstering growth and pushing up inflation to the bank's target of just under 2.0 percent, the ECB is inching toward turning off the easy money taps as the eurozone recovery has gathered strength.

Although it is still buying 30 billion euros in bonds each month, including Italian debt, it is widely expected to phase out the so-called "quantitative easing" programme this year, before raising its record-low interest rates in the second half of next year.

But the bank's slow-motion stimulus exit has been complicated by the euro area's shaky first-quarter growth figures, leaving observers to debate whether the region has hit a mere soft patch or if a downswing is in sight.

For now, most expect the ECB to stay on the sidelines of the Italian turmoil and continue carefully preparing markets for its stimulus winddown at the next governing council meeting on June 14.

Already holding some 22 to 25 percent of Italian public debt, the independent ECB "doesn't want to and can't be perceived as aiding any specific country," said Ducrozet.

In the short term, the Italian woes could paradoxically even boost the ECB's efforts by weakening the euro against the dollar. A weaker euro makes imports more expensive, driving up eurozone inflation.

Provisional inflation data released this week also seemed to support the ECB's plan to begin phasing out QE, with inflation hitting 1.9 percent in the eurozone, 2.0 percent in France 2.2 percent in Germany -- well past the ECB's target.

But as calls mount for the central bank to withdraw its crisis-era medicine, particularly in Germany, a return to higher interest rates will make it harder for heavily indebted nations like Italy and Spain to service their debt.

And if the populists in Rome stick to their spendthrift campaign pledges -- including a universal basic income for Italy's poorest and rolling back pensions reforms -- Italy's deficit could climb to between "five and 7 percent" of GDP, according to analysts at M.M. Warburg bank, putting the country on "a collision course" with European partners.

The Warburg economists predicted that Italy may eventually need some kind of European aid or debt relief to prevent a full-blown crisis.

"There's no easy option if Italy needed help tomorrow," said Pictet's Ducrozet. "And that's why the ECB will be very cautious about when to raise interest rates."