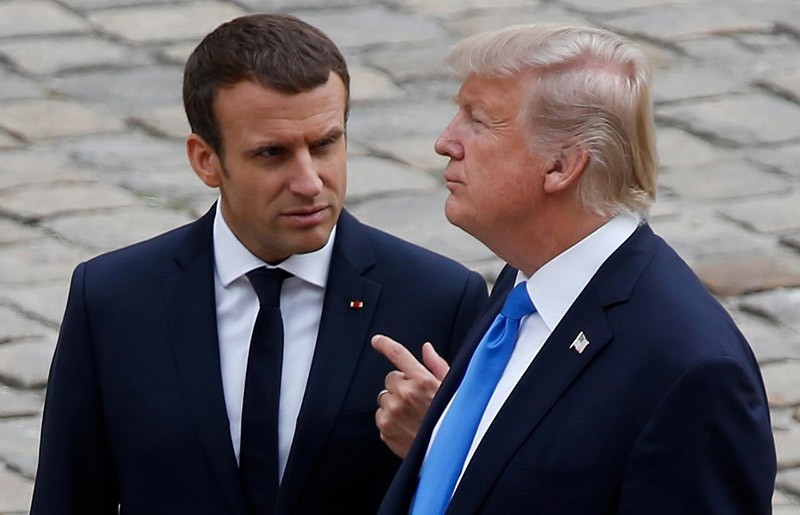 French President Emmanuel Macron and U.S. President Donald Trump walk in the courtyard as they leave after a welcoming ceremony at the Invalides in Paris, France, July 13, 2017. (Reuters Photo)
by Associated Press Jun 01, 2018 12:00 am

French President Emmanuel Macron has told U.S. President Donald Trump that the new U.S. tariffs on European, Mexican and Canadian goods are illegal and a "mistake."

The European Union is planning retaliatory tariffs on U.S. steel and food goods in the coming weeks, once it calculates the exact cost to European Union companies of the U.S. tariffs. Macron pledged the riposte would be "firm" and "proportionate" and in line with World Trade Organization rules.

The U.S. decision came despite last-minute talks in Paris this week to try to reach a deal.

The EU's trade chief, Cecilia Malmstrom, said Friday that the move to impose tariffs "is further weakening the Trans-Atlantic relations."

She said the measures "will cause a lot of damage to our steel and aluminum industry" and risk hurting global economic growth.

She dismissed the Trump administration's argument that the tariffs are needed for U.S. national security reasons.

"Internal security is not relevant. It is pure protectionism," she said.

Companies around the world have expressed concern about the tariffs and the risk that it could start a trade war, in which both sides hit each other with tit-for-tat measures.

Germany's Volkswagen, Europe's largest automaker, no side would win a trade war.

In a statement to The Associated Press, Volkswagen said it views the tariffs with "regret and concern."

"There are fears that this marks the start of a negative spiral of measures and countermeasures where there will ultimately be no winners," the company said.

The Wolfsburg-based company is calling for dialogue between the U.S. and the EU within recognized World Trade Organization principles "in order to prevent any long-term economic damage."