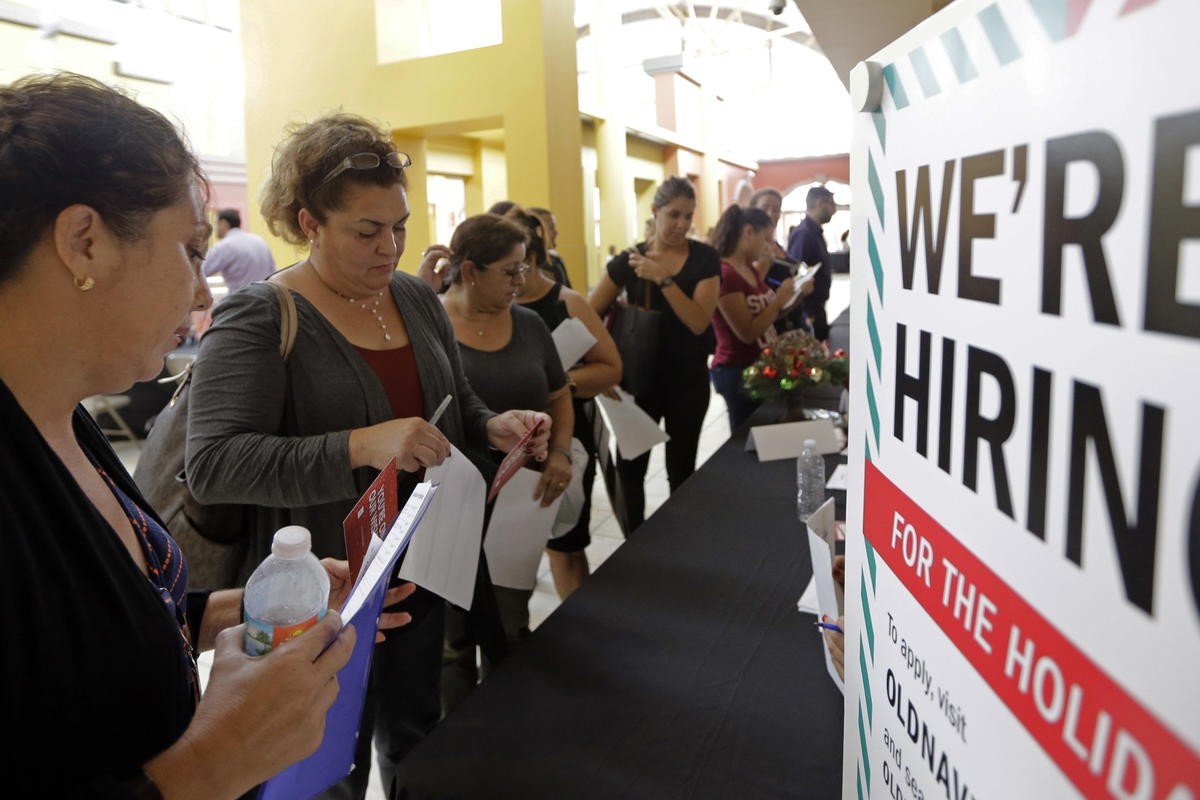 Job seekers wait in line to apply for part-time, full-time or seasonal positions at a job fair, Sweetwater, Florida.
by Associated Press Jun 02, 2018 12:00 am

U.S. job growth accelerated in May and the unemployment rate dropped to an 18-year low of 3.8 percent, pointing to rapidly tightening labor market conditions, which could stir concerns about inflation

U.S. employers extended a streak of solid hiring in May, adding 223,000 jobs and helping lower the unemployment rate to an 18-year low of 3.8 percent.

Average hourly pay rose 2.7 percent from a year earlier, a slightly faster annual rate than in April, the Labor Department reported Friday. But pay growth remains below levels that are typical when the unemployment rate is this low.

Still, the report shows that the nearly 9-year old economic expansion - the second-longest on record - remains on track.

Friday's report showed that hiring in the U.S. is benefiting a wider range of Americans: The unemployment rate for high school graduates reached 3.9 percent, a 17-year low. For black Americans, it hit a record low of 5.9 percent.

With the jobless rate so low, employers have complained for months about the difficulty of finding workers to fill jobs. The number of open positions reached a record high in March. Friday's report suggests that some companies are making extra efforts to find people.

For example, the number of part-time workers who would prefer full-time jobs declined slightly and is down 6 percent from a year ago. That may mean that businesses are converting some part-timers to full-time work.

Companies are also hiring the long-term unemployed - those who have been out of work for six months or longer. Their ranks have fallen by nearly one-third in the past year. That's important because economists worry that people who are out of work for long periods can see their skills erode. Yet employers now seem more willing to hire them.

The job gains in May were broad-based: Professional and business services, which includes higher-paying fields such as accounting and engineering, added 31,000 jobs. Health care, a consistent job engine for the entire recovery, gained nearly 32,000. Manufacturing added 18,000 jobs and construction 25,000.

The solid hiring data coincides with other evidence that the economy is on firm footing after a brief slowdown in the first three months of the year. The economy grew at a modest 2.2 percent annual rate in the January-March quarter, after three quarters that had averaged roughly 3 percent annually.

Some economists remain concerned that the Trump administration's aggressive actions on trade could hamper growth. The administration on Thursday imposed tariffs on steel and aluminum imports from key allies in Europe, Canada and Mexico. Earlier in the week, it threatened to hit China with tariffs on $50 billion of its goods.

Still, while Trump has made such threats since March, most employers so far haven't suspended hiring.

And consumers have started to spend more freely, after having pulled back in the January-March quarter. That gain could reflect in part the effect of the Trump administration's tax cuts, which might be encouraging more Americans to step up spending. Consumer spending rose in April at its fastest pace in five months.

Some of the spending reflects more money needed to pay higher gas prices, a potential trouble spot for consumers in the coming months. The average price of a gallon of gas nationwide reached $2.96 on Thursday, up 15 cents from a month ago, according to AAA. Some economists calculate that higher gas costs could offset up to one-third of the benefit of the tax cuts.

Companies are spending more on industrial machinery, computers and software - signs that they're optimistic enough about future growth to expand their capacity. A measure of business investment rose in the first quarter by the most in 3½ years. That investment growth has been spurred partly by higher oil prices, which have encouraged the construction of more drilling rigs.

Manufacturers have benefited from the healthier business spending and have increased hiring. In April, factories expanded production of turbines and other heavy machinery by the most in seven months.

Yet even with unemployment at an 18-year low, wage growth has been chronically sluggish in most industries, leaving many Americans still struggling to pay bills, particularly as inflation has ticked up. Still, companies are starting to pay more to lure workers from other companies, a trend that could lead to broader pay gains in coming months.