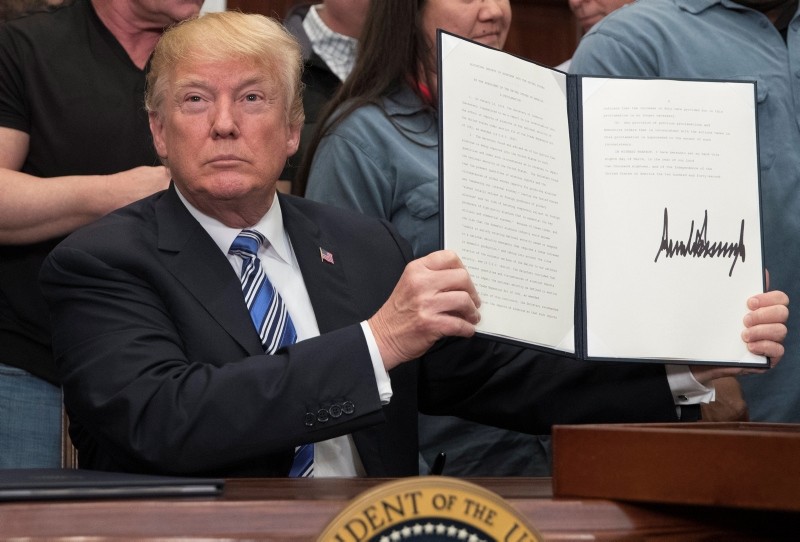 US President Donald J. Trump signs a presidential proclamation on aluminum tariffs in the Roosevelt Room of the White House in Washington, DC, USA, 08 March 2018. (EPA Photo)
by Compiled from Wire Services Jun 05, 2018 12:00 am

Kudlow said Trump and his other economic advisers met several times Monday and that Trump asked Kudlow to convey his new preference.

Trump's desire for a new approach may further complicate already tense talks that have been underway for months on renegotiating NAFTA. Trump maintains the landmark free-trade deal is a "disaster" that has killed U.S. jobs and hurt manufacturing.

The U.S. president at one point threatened to pull out of the three-nation pact. Talks have been underway since late 2017 to revise and modernize the deal, but became hung up on U.S. demands to increase American content in duty-free NAFTA autos, as well as a five-year sunset clause.

Negotiations are now in suspense due to the coming elections in Mexico and the United States.

Kudlow said he is awaiting a reaction from top Canadian officials to whom he relayed the idea on Monday.

"The important thought is he may be moving quickly towards these bilateral discussions instead of as a whole," Kudlow said, but noted it is not clear how soon that would happen.

The NAFTA talks are just one facet of Trump's confrontational, multi-front trade policy, which includes imposing steep tariffs on steel and aluminum coming from chief U.S. allies -- Canada, Mexico and the European Union -- which has prompted sharp retaliation.