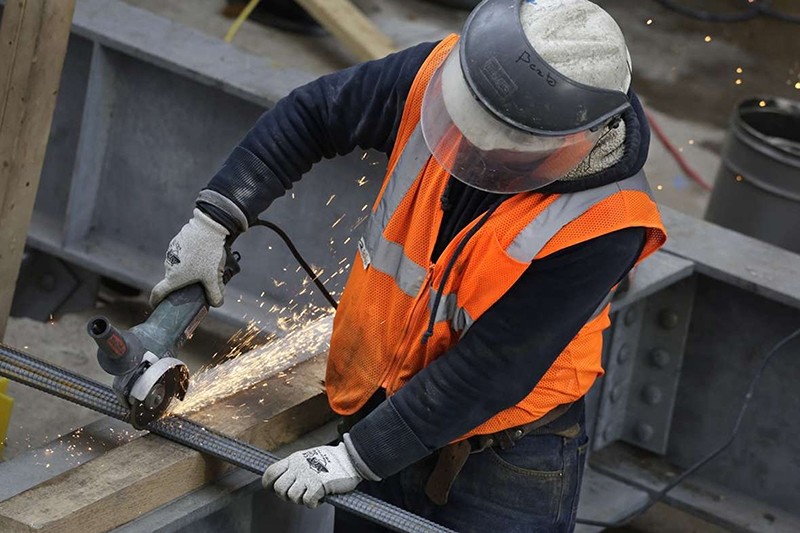 The Turkish economy maintained its upward trend in the first three months of this year, as it beat expectations and grew by 7.4 percent, official data revealed Monday

Turkey's economy grew by a higher-than-expected 7.4 percent in the first quarter of this year compared to the same period last year, beating the market forecast of 7 percent, official statistics by the national statistical body said Monday.

The figure follows 11.3 percent and 7.3 percent growth in the third and fourth quarters of 2017, while the growth rate was 7.4 throughout the year.

According to the calculations, the biggest contribution to the first quarter growth came from private consumption with 6.7 points, followed by total investments with 2.8 points and public consumption with 0.5 points.

Turkey's economy grew 7.4 percent in 2017 compared with the previous year. The GDP at current prices climbed to over TL 3.1 trillion last year, up 19 percent from 2016.

Turkey continues to be one of the fastest growing countries in the world, President Recep Tayyip Erdoğan said on his social media account.

"Turkey's economy grew 7.4 percent in the first quarter of 2018. We are the first among OECD countries and second among G20 countries," he said.

"Despite all the attacks on the economy and games played [on Turkey], [we will] continue to grow strongly on the steady macro basis," the president added.

When activities that constitute the gross domestic product are analyzed, industry rose by 8.8 percent, the construction sector increased by 6.9 percent, while the agricultural sector saw an increase of 4.6 percent in the first three-month period of this year, according to the data.

Elaborating on the growth data, Deputy Prime Minister in charge of the economy Mehmet Şimşek said with the growth in the first quarter, Turkey ranks among countries with the strongest growth performance in the Organization for Economic Co-operation and Development (OECD), the EU and G-20 members.

Growth in the first quarter was driven by domestic demand Şimşek said. "A 7 percent increase in machinery equipment investments in real terms in the same period is encouraging for growth in the upcoming period."

The country's economic administration emphasized that mobility in the economy continues.

Economy Minister Nihat Zeybekci said with 7.4 percent growth in the first quarter, Turkey grew faster than EU countries and shared the top in the OECD with India. "We have given the necessary answer to the international institutions that have downgraded their growth estimates, they will soon start revising their forecast upward," the minister said.

"I expect that the effects of the tightening measures taken by the Central Bank of the Republic of Turkey (CBRT) will be limited by the 49 percent increase in value of investment incentive statistics in the first five months of 2018 and the strong support of exports. Turkey has the potential and determination to capture and even rise above the 5.5 percent growth rate projected in Turkey's Medium-Term Program (MTP) for 2018.

"Domestic demand, which is the driver of the economy, maintained its strong trend in the first quarter, and private consumption expenditures increased by 11 percent. The public expenditures have continued to make a limited but positive contribution to growth by increasing 3.4 percent," said Finance Minister Naci Ağbal.

"With the support we provide for investment, employment and exports, the wheels on the production and investment side continue to turn rapidly. Investment expenditures, which showed a strong growth performance with 7.3 percent in 2017, increased by 9.7 percent in the first quarter this year. In particular, the strong increase seen in machinery and equipment investments since the second half of last year is a very positive development for the productive structure of our economy," the finance minister said.

Banu Kıvci Tokalı, Halk Investment research director, said that the growth momentum, which has strengthened since the third quarter of last year, has also been preserved in the first quarter of this year.

Tokalı emphasized that industry and construction on the sectoral basis and private consumption and investment expenditures on the expenditures basis were the main factors for growth to remain strong in the first quarter as well.

"Seasonally adjusted growth data is in the direction of expansion in the last six quarters. However, we will see a slowdown in the growth rate as from the second quarter due to the monetary tightening in the domestic market as well as the influence of the fact that global conditions are less supportive than in the past," she added.

QNB Finansinvest chief economist Burak Kanlı said that economic activity maintained its strength in the first quarter. "Consumption and investment demand continued to gain momentum with the seasonally adjusted data. On the other hand, we see a slight slowdown in imports and exports," he said.