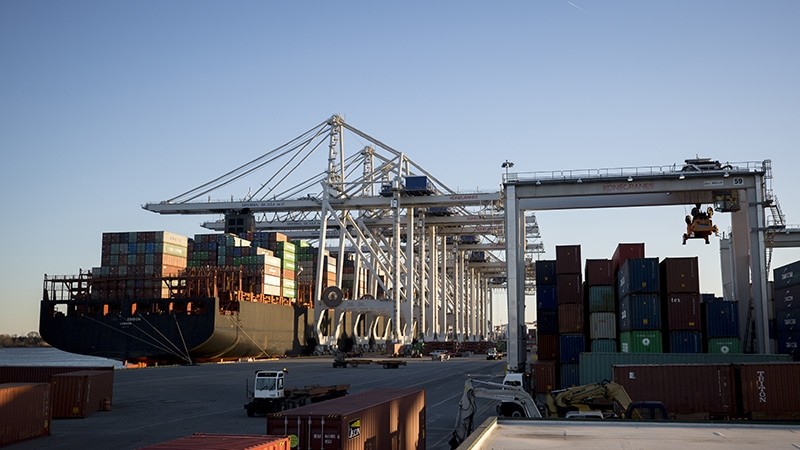 In this Jan. 30, 2018, file photo, several ship to shore cranes work a vessel at the Georgia Ports Authority's Port of Savannah loading and unloading container in Savannah, Ga. (AP Photo)
by Compiled from Wire Services Jun 14, 2018 12:00 am

President Donald Trump's aggressive trade policies and expansive tax cut at a time when the U.S. economy is growing, are creating risks that could damage the domestic and global economies, the International Monetary Fund (IMF) warned Thursday.

The tax cuts will generate a near-term boost to growth but also "will elevate the risks to the U.S. and global economy," and increase the size of those risks, the IMF said in its annual review of the U.S. economy.

Meanwhile, the punitive import duties the U.S. has imposed and threatened could harm the world economic recovery by "catalyzing a cycle of retaliatory responses" and interrupting global supply chains, the report said.

And the IMF warned that the administration's use of a rarely-applied national security justification for the tariffs -- on steel, aluminum and potentially autos -- opened the door for other countries to follow suit and use that excuse to impose broad import restrictions that would "undermine the rules-based global trading system."

"The U.S. and its trading partners should work constructively together to reduce trade barriers and to resolve trade and investment disagreements without resorting to tariff and non-tariff barriers," the IMF urged.

IMF chief Christine Lagarde warned that tit-for-tat retaliation from U.S. trading partners, as has been threatened, would create "losers on both sides."

And that outcome would have a "serious" economic impact on the U.S. and global economies, she told reporters, including by causing inflation to accelerate.

In addition, the fund's economists indicated Trump's focus on reducing trade deficits with specific countries was misplaced and the level "should not be viewed as either an anchor or a target."

Instead, trading partners should work on "securing more ambitious bilateral and plurilateral agreements on trade and investment."

But Washington should not ignore the U.S. workers harmed by globalization, but "should focus on mitigating the downsides through training, temporary income support and job search assistance."

The United States is the fund's single-largest shareholder.

Trump came to power in part on a wave of anger over immigration and international trade perceived as undermining workers' wages and American living standards.

And while Trump has crowed repeatedly about the strong U.S. economy and the beneficial impact of the massive income tax cuts passed in December, the reforms have a high budgetary cost and could fuel faster inflation, the report said.

That in turn would prompt the Federal Reserve to raise interest rates more aggressively, setting off a chain of spillover effects on the global economy, especially emerging markets, the IMF cautioned.

The IMF projects the Fed's preferred inflation measure will increase 2.8 percent this year, and 2.4 percent next year, with growth of 2.9 percent and 2.7 percent.

Those forecasts are higher than the Fed's for growth and inflation.

The IMF praised some aspects of the U.S. tax reform, which addressed what it said were long-overdue simplifications and reductions in the corporate rate.

However, contrary to the White House assertions, some features favor the wealthy "counter to the authorities' objectives of increasing equity."

The fund said "it would be preferable to recalibrate the rate structure in order to concentrate tax relief to those earning close to or below the median income."

And the government has failed to make room for needed spending to upgrade U.S. infrastructure, which would help boost economic growth in the long term.

"The combined effect of the administration's tax and spending policies will cause the federal government deficit to exceed 4.5 percent of GDP by 2019. This is nearly double what the deficit was just the years ago."

And providing stimulus to an already-growing economy is "quite rare" and not seen in the U.S. since the 1960s.