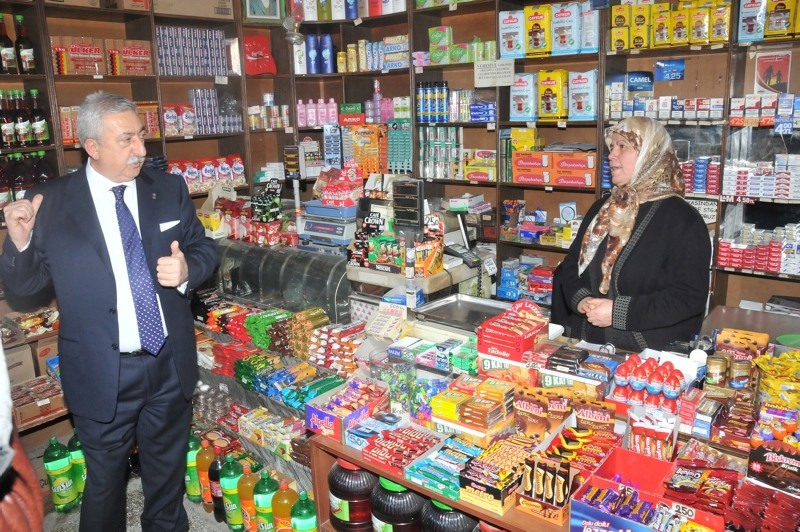 TESK President Bendevi Palandu00f6ken visits a grocery store in capital Ankara after the governorate decides shopping malls to be shut down on first days of religious holidays. (IHA Photo)
by Daily Sabah Jun 17, 2018 12:00 am

The number of traditional grocery stores throughout Turkey has decreased by 32.5 percent since 2010 amid unregulated expansion of supermarket chains, the president of Confederation of Turkish Tradesmen and Craftsmen (TESK) revealed in a written statement Sunday, demanding legal action to protect shop owners and small businesses.

TESK President Bendevi Palandöken said that 78,372 grocers went out of business in the same period, with their numbers falling to 162,000. At the same time, nationwide supermarket chains or discount chains with five branches or over saw an increase of 178 percent in the number of branches.

"Article 173 of our constitution openly stipulates taking measures to protect and support tradesmen and craftsmen. Just like shopping malls, these chain stores gravely harm the tradesmen and taking measures is now inevitable," Palandöken said. He said it is not possible for tradesmen to keep up with the large capital of supermarket chains and ever-changing technology, and therefore they need legal protection.

He added that number of branches of organized supermarket chains is expected to increase by 53 percent to 44,000 by 2014, with the share of discount chains leading this expansion expected to rise to 80 percent. Forecasts show that nearly half of domestic chains will leave the sector by selling out or going out of business.

The only part of the country where discount markets have not yet spread are villages, Palandöken said, noting that it won't be surprising if they spread to villages soon too.