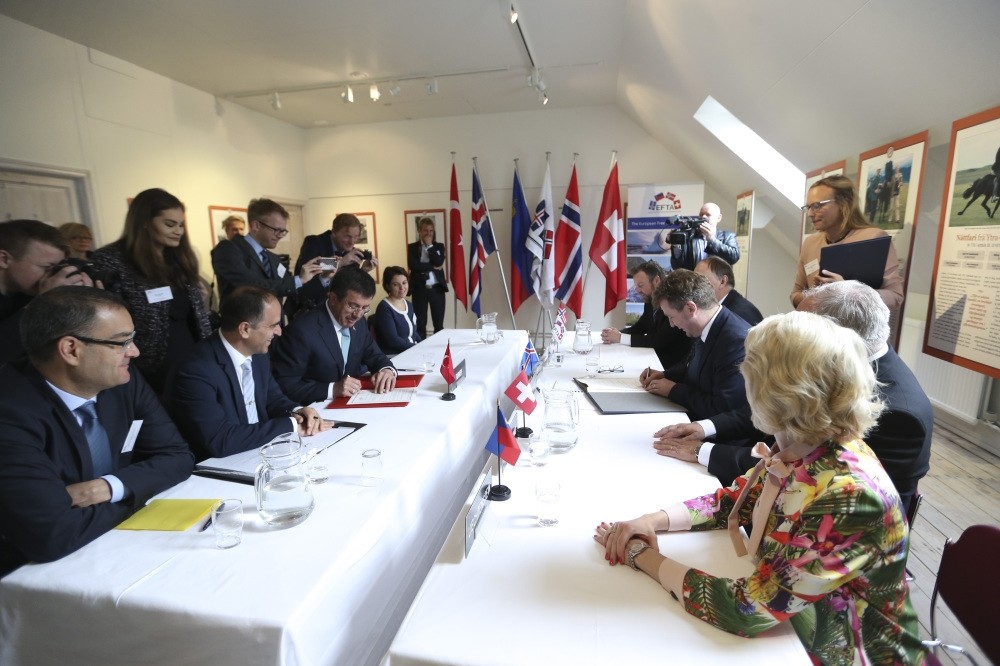 The scope of Turkey's free trade agreement with Switzerland, Iceland, Norway and Liechtenstein has been expanded to facilitate trade and is expected to set an example for the country's upgrade process for the customs union

Turkey and the European Free Trade Association (EFTA) signed an agreement to modernize and expand the scope of the free trade agreement (FTA) in a ceremony held in Saudarkrokur, a town in northern Iceland. Speaking at the signing ceremony, Economy Minister Nihat Zeybekci said the revised agreement is Turkey's first FTA.

The revised FTA is in its essence is a more modern and more expansive agreement than the current Customs Union.

"We want this revised FTA to set an example for the upgrade process of the Customs Union," Zeybekci said.

He stated that the revised FTA includes trade of service and electronic goods, intellectual property rights in addition to trade of goods. The expanded scope will better reflect on the economic ties, the minister added.

"Steps to facilitate trade including eased visa and work permits in addition to land transportation and logistics services, health services, and tourism services, following the conclusion of successful negotiations," he said.

The current FTA updated the rules of the trade of goods and instituted cooperation and advisory councils beyond the provisions of the World Trade Organization (WTO) regarding the instruments of trade protection from trade disputes.

Provisions for the facilitation of trade that simplify the customs processes and matters related to e-commerce have been included in the new revised FTA.

The Pan-European-Mediterranean preferential rules of origin, to which the agreement is subject, are linked to regional conventions that extend to include the Balkan countries, enabling accumulation with the economies in larger geographies.

A strong system between EFTA countries and Turkey has been instituted for the mutual protection of innovations in intellectual property rights.

Cooperation provisions for facilitating technology transfer were included in one of Turkey's FTAs for the first time.

With the inclusion of rules and commitments on service trade, a more predictable trading environment for service providers and investors will be created in the country.

EFTA states are also ensured to undertake comprehensive commitments regarding road transport and tourism services, which are among the most important service exports items in Turkey, suggesting that quotas for dual and transit road transport to EFTA states should be lifted and that carriers are protected from being subject to discriminatory charges.

The articles regarding the mobility of persons aim to prevent the arbitrary practices of the visa applications by the Turkish service providers.

An annex on health care services was signed with Switzerland, ensuring patient mobility between the parties to receive private health, elderly care and other health services

The EFTA, which was set up in 1960, promotes free trade and economic integration to the benefit of its member states and their trading partners as an intergovernmental organization. There are currently over 20 free trade agreements between Turkey and other countries worldwide, and Ankara is in negotiations for some 20 more.