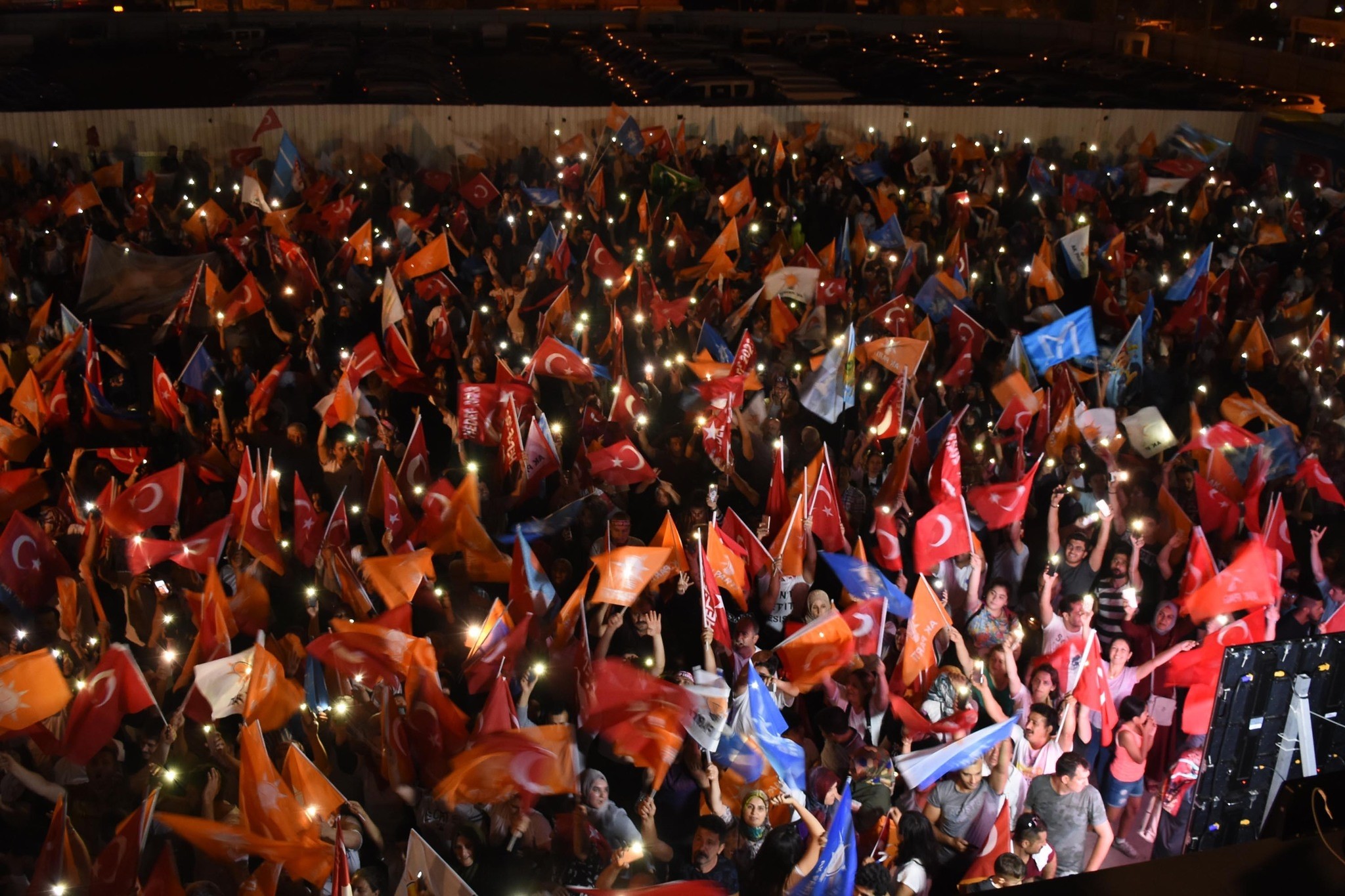 AK Party supporters wave flags in front of the partyu2019s headquarters in u0130zmir following the presidential and parliamentary elections, June 24.
by Daily Sabah Jun 27, 2018 12:00 am

The new administration under the new governance system will primarily focus on resolving economic issues such as the current account deficit, inflation, exchange rate, fiscal discipline and interest rates

Up until the June 24 presidential and parliamentary elections, and for the three days that have since passed, the talk of the country has mainly revolved around the economy, while analysts closely following developments in the Turkish economy have engaged in deeper debates about the new economic structure. That being the case, the priority of President Recep Tayyip Erdoğan and his new government seems to be resolving the economic issues. The president and the Justice and Development Party (AK Party) have all repeatedly explained their economic policy starting from day one of their campaign and pledged to focus on the current account deficit, inflation, fluctuations in the exchange rate, fiscal discipline and interest rates.

The new administration will start working on structural reforms aimed at correcting macroeconomic imbalances in order to achieve the targets set forth in the country's medium-term program, which was introduced last September.

A number of measures have already been widely discussed by the government and President Erdoğan on a number of occasions. For instance, in order to ensure price stability and contain the impacts of the volatile exchange rate on the macro-financial stability, the government is expected to encourage the use of the Turkish lira in business contracts, and necessary mechanisms and incentives will be devised for the better management of exchange rate risks companies are exposed to.

With a view to determine and eliminate the structural elements that lead to inflation, the prices and tax adjustments set and managed by the public sector will comply with inflationary expectations and targets.

The registration system from the producer to the consumer will be strengthened in the food sector. Cold chain investments will be encouraged.

The recent deterioration in inflation is among the biggest challenges ahead for the new government. Turkey's annual inflation rate was 12.15 percent in May, up from 10.85 percent in April, according to the Turkish Statistical Institute (TurkStat), the national statistics body. Inflation, whose increase occurred mostly due to the rapidly increasing exchange rates and the impact of costs, increased 1.62 percent month-on-month, hitting the highest level in the last six months. As noted in the country's medium-term program, inflation is targeted to converge to 5 percent by the end of 2020.

Meanwhile, with interest rates decisions taken in the recent period, the Central Bank of the Republic of Turkey (CBRT) was designed to tamp down inflation and stabilize the Turkish lira, while also sending a strong message to markets about its future policies whereby it will take necessary measures to control inflation and the declining lira.

The CBRT has raised interest rates by 500 basis points since April 25. The interest rate increase carried out by the bank since the beginning of 2017 has reached 950 basis points. On June 7, the bank's Monetary Policy Committee (MPC) ramped up interest rates for the second time in two weeks as it hiked its policy rate, also known as one-week repo auction rate, by 125 basis points.

The MPC has decided to increase the policy rate from 16.5 percent to 17.75 percent. It has hiked rates by 4.25 percentage points in just over two weeks, following a 3 percentage point increase at an emergency meeting last month.

The decision came after the central bank hiked its late liquidity window rate by 300 basis points to 16.5 from 13.5 percent on May 23, after an extraordinary meeting in order to stem the slide in the Turkish lira, which fell to 4.92 against the dollar on the same day. It described the move as a "powerful monetary tightening" policy and said it's ready to continue using all instruments.

Earlier this month, the central bank introduced a simplification in its monetary policy, whi

Since it affects costs, the increase in the e

xchange rate of the dollar is of critical importance for Turkey. In addition, it negatively affects the real sector's debt. The dollar rate increases costs in many sectors and brings along risks of additional increases. The government has taken steps regarding the debt on dollar basis of small and medium sized enterprises, while the preparations are underway for large companies.

In light of the interest rate and exchange rate problems, the empowerment of the capital markets emerges as a priority to curb the share of the banking operations in the entire financial system and to enable the real sector to benefit more from these markets.

New financing methods, including venture capitals, will be encouraged. The regulatory framework of the banking sector will be made more efficient to cut the operational costs of banks. The share of participation banks in the banking system will be expanded. The financing provided by the Credit Guarantee Fund (CGF) will be used in investments and exports.

The process to borrow from the Chinese bond market in 2018 will be expedited and more countries will follow.

The system of credit insurance will be mainstreamed among small and medium size enterprises and a certificate of interest-free policy will be drawn up. Interest-free financial instruments will be broadly used in public sector investments, particularly in infrastructure investments.

Turkey's economy grew by a higher-than-expected 7.4 percent in the first quarter of this year compared to the same period last year, beating the market forecast of 7 percent. The gross domestic product (GDP) at current prices increased to around TL 792.69 billion ($170.79 billion) in the first three months, according to the national statistical body. The figure followed 11.3 percent and 7.3 percent growth in the third and fourth quarters of 2017, while the growth rate was 7.4 throughout the year.

In these periods of growth, current account deficit has stood as the most important risk in front of the country.

hit $5.4 billion in April this year, marking an increase of $1.7 billion, year-on-year, according to the data by the central bank.

The target current account deficit/GDP ratio is 4.3 percent for this year, 4.1 percent for next year and 3.9 percent in 2020, as stated in the medium-term program.

According to the CBRT's report on balance of payments, the country's 12-month rolling deficit reached nearly $57.1 billion in April. Turkey's annual current account deficit in 2017 was around $47.3 billion, compared to the previous year's figure of $33.1 billion.

The increase in the current account deficit increases the fragility of Turkey, which is why it is among the previous issues to be discussed in the new period.

Turkey's central government budget balance saw a surplus of TL 2.7 billion Turkish lira in May, according to the Finance Ministry.

Last month, the country's budget revenues amounted to TL 70 billion, up nearly 22 percent on a yearly basis, according to official data.

Budget expenditures in May were TL 67.3 billion, an annual hike of around 32 percent. Excluding interest payments, the central government budget balance saw a surplus of TL 8.7 billion last month.

Official figures also said the budget saw a deficit of TL 20.4 billion in the January-May period.

The new government will focus on ensuring fiscal discipline, and is expected to generate additional revenues with new configurations, while measures related to savings are also expected to be taken in the upcoming period.

President Erdoğan declared victory in the presidential elections on Sunday and received 52.6 percent of the vote, becoming the first president to serve under the new governing system. A transition to an executive presidency will bring a number of major changes in the way the country is run.

One of the key points in the new system will be the economy, as the ruling government aims to bring economic management under o

ne roof to improve collaboration; these future moves will simplify dealings with government bodies, such as applications for investment incentives for businesses in the country. The country is to see the number of ministries decrease from 21 to 16, which will speed up decision-making in the new system, while the number of ministries dealing with the economy will be reduced to three from six.

The names that will be appointed in the new economic cabinet in the upcoming period is being closely followed by the markets.

he new system will enable the reduction of the bureaucracy and speed up the decision making process. Moreover, in another reform, four significant offices will be established, including investment, finance, human resources and digital transformation.