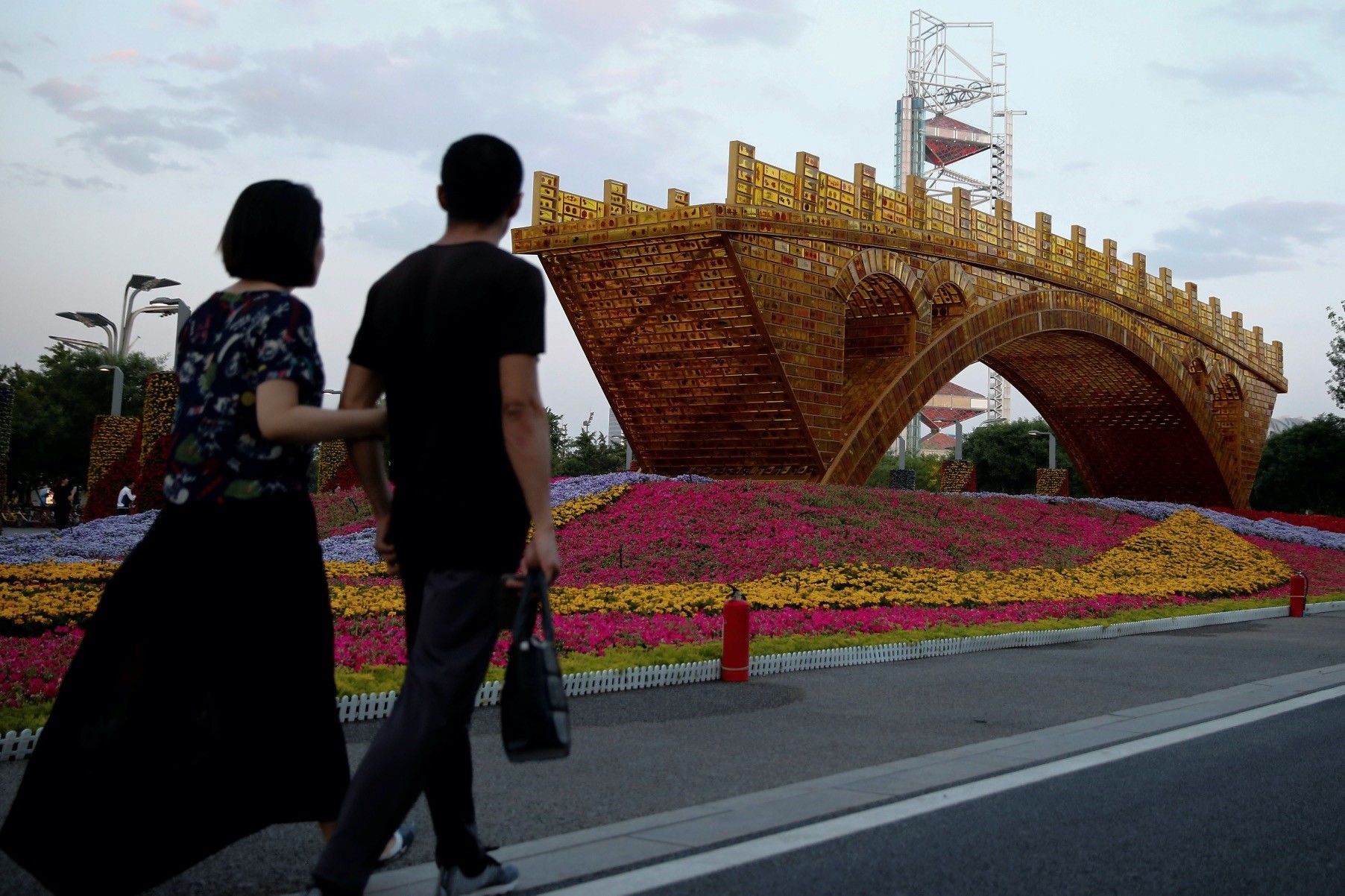 The Golden Bridge on the Silk Road by Artist Shuyong was set up ahead of the Belt and Road Forum in Beijing last year in May.
by Daily Sabah Jun 30, 2018 12:00 am

Strengthening Turkish-Chinese economic ties have been observed in the increasing number of Chinese firms investing in Turkish energy, infrastructure, finance, tourism, and e-commerce sectors as their number hit nearly 1,000

Chinese firms that have been operating in Turkey's logistics, electronics, energy, tourism, finance and real estate sectors are expanding their businesses in the country. With the entry of Bank of China and Industrial Commercial Bank of China (ICBC), the flow of Chinese companies into Turkey has accelerated and also expanded into the e-commerce sector in the recent period.

The world's second largest trader, China invests $120 billion annually in various countries across the world and Turkey has been enjoying China's overseas investments in the recent decade.

Accordingly, the number of Chinese firms operating in Turkey had neared 1,000 by April, according to the data of Economy Ministry.

Drawing attention to the significance of Turkey within the "Belt and Road Initiative" (BRI), an infrastructure development project designed and launched by Chinese President Xi Jinping in 2013 and spanning over 65 countries, Foreign Economic Relations Board (DEİK) Turkey-China Business Council Chairman Murat Kolbaşı stressed that the entry of two Chinese banks to the Turkish financial sector and the acquisition of a port by Chinese investors indicate the country will expand its investments and business operations in Turkey in other sectors, as well, including in energy, logistics, tourism, transportation, infrastructure and e-commerce.

Turkey's unique position in the BRI makes the country a gate to Europe and Africa for China's trade operations on the project's route. Therefore, Kolbaşı highlighted that Turkey will naturally become a logistics hub for trade on the three continents.

With the aim of expanding Turkish-Chinese cooperation in the logistics sector, Turkey's national flag carrier Turkish Airlines (THY) announced that it will form a logistics company in Hong Kong in partnership with China's ZTO Express and Hong Kong's PAL Air.

The partners aim to make the new joint venture one of the world's largest integrator, and generate revenue of $2 billion within the first five years of its operation. They expect growth performance in proportion to the rising demand in the e-commerce sector.

The new joint venture and Istanbul as a mega transport hub is expected to enable THY to deliver to its customers around the world with excellent service quality.

In addition to logistics, the two countries have been cooperating heavily in the energy and transportation sectors.

Both the Turkish and Chinese Transportation, Maritime and Communications Ministries also signed an agreement during last year's Belt and Road Initiative Summit in Beijing, on an international passenger and cargo transport company, which stipulates that transport vehicles in China and Turkey can have access to, and transit within, one another's territory.

This agreement is expected to unlock international road transport channels between China and Europe, with Turkey constituting the middle corridor of the route. The agreement, which signifies China's willingness to render the Belt and Road initiative as integrated into Turkey's development strategy, will also help strengthen the exchange between China and Turkey, promoting the facilitation of international transportation among the countries located on the Silk Road.

Moreover, the Istanbul-Ankara high speed train, which has been operating since July 2014, was also constructed within the scope of the Turkish-Chinese partnership. For the construction of the Edirne-Kars high speed railway route, the Turkish government also continues to negotiate with the Chinese government.

Chinese energy companies have also increased their presence in the country's energy industry and they have invested in thermal power plants in Turkey. For instance, last year Turkish and Chinese firms founded Emba Elektrik Üretim A.Ş., which will operate a lignite-powered thermal power plant in Turkey's southern province of Adana. The company is a joint venture of Shanghai Electric Power Co., Ltd and AVIC-International Project Engineering Company.

While Chinese foreign direct investment (FDI) in Turkey exceeding $2 billion according to the data of the Economy Ministry for the last 15 year, the largest FDI from China was the acquisition of Turkey's third largest port, Kumport, in Istanbul by the Chinese giant container terminal operator Cosco Pacific for $940 million in September 2015.

The company holds a 65 percent stake in the port. Meanwhile, the volume of bilateral trade between Turkey and China was recorded at$26.3 billion in 2017. Turkey's exports to the country totaled to nearly $3 billion while its imports from China exceeded $23 billion.

In a bid to encourage the use of national currencies in bilateral trade as a medium of exchange, the central banks of Turkey and China signed a swap agreement first in 2012 and later renewed it in 2015, for three years.

The first withdrawal and use of cash in the provisions of the swap agreement took place in 2016. Financial cooperation extends to the operations of Chinese banks in Turkey, as the Industrial and Commercial Bank of China (ICBC) formally began operating in the country in May 2015. ICBC Turkey was the first bank to use a TL 450-million ($98.5 million) fund created by the Central Bank of the Republic of Turkey (CBRT) within the framework of the swap agreement.

Evaluating the tourism relations between Turkey and China, Kolbaşı recalled that there are currently 27 regular direct flights between the two countries but in order to attract more Chinese tourists, flight frequencies must be increased he said, citing the interest of Chinese tourists in Turkish historical sites.

"We know that the number of Chinese tourists is not adequate right now but the expectation for this year is to welcome 500,000 tourists," he said.

Chinese Wanda Group, which incorporates luxury hotel chains, partnered up with Turkey's Mar Yapı for a hotel investment last year. The agreement regarding Wanda Vista Istanbul, Wanda Group's first offshore hotel to be built in Istanbul, will be opened in the city as part of strategic collaborations with Mar Yapı in the scope of its investments in Turkey across a variety of fields including technology, tourism, finance and real estate.

Turkey saw a huge 166 percent increase in shopping by Chinese tourists in the first quarter of 2018, according to Global Blue, which handles "tax-free shopping" transactions in more than 51 countries.

The company said, Chinese tourists make up for more than 40 percent of global tax-free sales. As for Turkey the uptick was related to China's declaration of 2018 as "Turkey Tourism Year." At the launch last year, Culture and Tourism Minister Numan Kurtulmuş said more than 250,000 Chinese tourists visited Turkey in 2017. That number is expected to reach 500,000 this year due to the "Turkey Tourism Year" announcement.