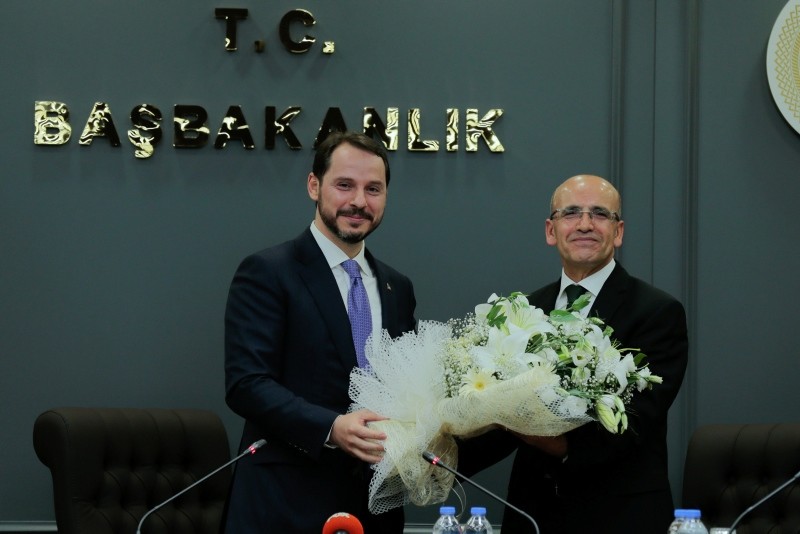 Treasury and Finance Minister Berat Albayrak, who took office today, hinted that Turkey will follow fiscal and monetary policies that will ensure stronger integration with the global markets while aiming to reduce inflation to single digits

Turkey's first Treasury and Finance Minister Berat Albayrak who took office Tuesday in a ceremony in Ankara from the former Finance Minister Naci Ağbal and former Deputy Prime Minister Mehmet Şimşek, who was in charge of the Treasury in the previous system, vowed that Turkey will be more integrated with global markets from the East to the West.

Hinting on the monetary and fiscal policy that will be implemented in the upcoming period, Treasury and Finance Minister Albayrak stressed that Turkey will act more swiftly, and fair and transparent policies will be executed within the framework of a private-sector mindset.

"Within the principles of market economy, we will witness Turkey becoming more integrated with the global financial system," Albayrak said, stating that independent monetary institutions will deliver stronger performances working in compliance with the global system.

"We will cooperate with international financial actors and stakeholders as well as public and private stakeholders in Turkey in close communication and ensure the successful accomplishment of a strong Turkey vision." The ministry's policies will be devised in accordance with the structures of the market economy and deliver results that will benefit both Turkey and its partners.

Minister Albayrak stated that Turkey will analyze its real economy dynamics and global transformation and develop stable and reliable policies accordingly. Rather than focusing on daily developments, the country will execute mid-term and long-term plans to make sure a strong and trustworthy policy is integrated with global financial markets.

"The ministry will strive to deliver an exemplary performance of fiscal and budgetary discipline," Albayrak said. 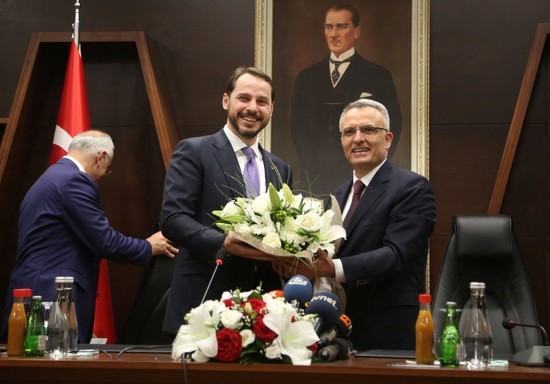 Albayrak, the former energy and natural resources minister, was appointed to lead Turkey's Treasury and Finance Ministry. Albayrak completed his master degree from New York's Pace University in finance and holds a Ph.D. in the financing of renewable energy resources.

As energy minister, Albayrak accomplished a great many number of projects that aimed to reduce Turkey's dependency on external resources, particularly with innovative solar and wind power projects that attracted foreign investment.

Under his supervision, Turkey's national energy and mining policy which relied on three principles, indigenization, predictability and security of supply, was prepared and introduced. Turkey also proactively resumed its exploration activities in the Black and Mediterranean Seas and bought its first drilling ship during his tenure.

Experienced and competent names from both the business and political worlds have been called upon to manage the economy in the new government system. Already, they have pulled up their sleeves to attend to urgent matters that need resolving.

Under the new presidential governance system, economic management has been redesigned with the Treasury and Finance Ministry, Trade Ministry and Industry and Technology Ministry.

While most of the new Cabinet members were chosen from outside the Turkish Grand National Assembly (TGNA), he was one of four deputies who came from within the TGNA. He was also one of the four ministers who managed to stay in the Cabinet.

The task of the Treasury and Finance Ministry was set as assisting in the preparation of fiscal and economic policies and implementing these policies. The ministry will hold treasury accounts, carry out bookkeeping services, conduct studies on income regulation, and prepare legislation on all kinds of income transactions.

The activities related to the exchange regime will also be included in the ministry's mandate. It will also undertake a general orientation task to eliminate ambiguities in the medium and long term for the private sector by setting the policy recommendations that provide a perspective to the society with a participatory approach.

Ruhsar Pekcan, one of two female ministers in the new Cabinet, was chosen to lead the Trade Ministry, a combination of the former Customs and Economy Ministries.

Pekcan, an electrical engineer, has worked in several institutions including the Bank for the Development of Industry of Turkey (TSKB), the Foreign Economic Relations Board of Turkey (DEİK) and the Union of Chambers and Commodity Exchanges of Turkey (TOBB).

The ministry will also assist the preparation of the customs policy and implement, ensure and supervise the timely, efficient and effective execution of the customs services in accordance with established standards. It will be tasked with customs enforcement in land and railway gates and airports and sea ports with customs, free zones, bonded warehouses, bonded areas and customs territories.

The work of international organizations and the European Union on ministry services will be followed and EU harmonization studies will be carried out and opinions will be formulated in this regard.

Studies will be conducted on the chambers of commerce, industry and maritime, trade exchanges, TOBB, services belonging to associations of merchants and craftsmen, as well as the Turkish Exporters Assembly (TİM).

Services related to companies, cooperatives and trade registry officers, the merchant and craftsman registry offices will be carried out within the scope of the ministry.

Necessary measures will be taken to expand the market and product variety of exports in order to increase the share in world trade and to boost sustainable exports; support methods will be developed and implemented in this direction.

It will also implement measures to realize imports in the interest of the country's economy, defend the domestic industry and implement defensive measures of trade policy.

The bilateral, regional and multilateral commercial and economic relations of Turkey with foreign states and international organizations will be regulated, and agreements will be made in these issues within the framework of the relevant legislation. Necessary measures will be taken in the development of the country in order to provide and direct the expected contributions from foreign capital.

It will be ensured that the products subject to foreign trade are safe and in line with the legislation and standards, and for this purpose, imports and exports will be inspected and studies will be carried out on the prevention of technical barriers in trade. Market surveillance and inspection of consumer products under the Ministry's responsibility will be conducted. The Trade Ministry will be composed of central, provincial and foreign organizations.

President Erdoğan previously announced that a few general directorates and departments within the Customs and Trade Ministry and the Economy Ministry will be gathered under the Trade Ministry.

Varank has been a researcher and served international Florida State and Indiana universities. He has also been an adviser to the prime minister and president, and was given the title of ambassador by Erdoğan.

The Industry and Technology Ministry will set the policies of science, technology and innovation in line with economic development, social development and national security objectives with industrial policies and strategies.

The ministry, which will conduct studies to determine industrial policies and strategies, will prepare and implement administrative and technical regulations on industrial products and produce industrial statistics and analyzes by keeping the register of industrial enterprises.

It will cooperate with relevant institutions and organizations to conduct studies on science, technology and innovation policies in line with economic development, social development and national security objectives.

Industry-oriented research and development and innovation programs and projects, activities and investments to be carried out in this scope will be supported, incentive measures will be implemented, and regulation and supervision will be carried out in these issues.

The ministry will support nearly all the projects required and found eligible for the activities of the organized industrial zones, all the infrastructure of the industrial sites and up to 70 percent of the superstructure facilities.

It will prepare the required legislation in order to ensure that the investment incentives are effectively regulated for the benefit of the country's economy and will coordinate the development agencies and carry out the related procedures.

By taking the necessary steps to increase the competitiveness of the information sector, the ministry will have the authority to authorize companies that will supply the public information projects in accordance with the required competencies or standards, to cancel or suspend the authorization in accordance with the technical content criteria. It will determine the merits and procedures to be followed by the public institutions and contractors in the execution of the contracts related to public information projects. 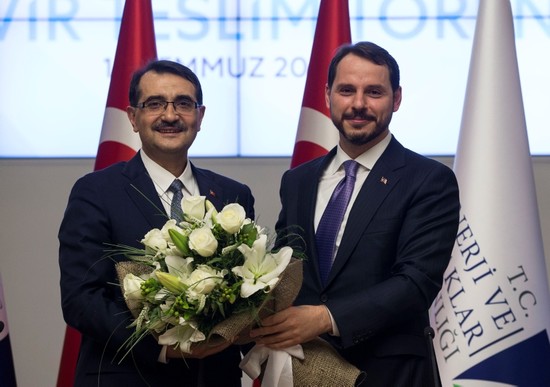 Rounding out the Cabinet, Fatih Dönmez took up the role of the energy and natural resources minister. He formerly served as undersecretary in the ministry. Mehmet Cahit Turan was named the transportation and infrastructure minister and Bekir Pakdemirli became the food, agriculture and livestock minister.

Abdurrahman Kaan, the head of the Independent Industrialists and Businessmen Association (MÜSİAD), said that the new economy administration will raise the country's production, exports, investments and growth.

Meanwhile, Şekib Avdagiç, the head of the Istanbul Chamber of Commerce (İTO), stressed that new appointments gave confidence to the business world.

TİM Chairman İsmail Gülle said, "We believe, the new ministers will be successful in delivering."

The Turkish Industry and Business Association (TÜSİAD) also said in a statement, "We expect an extensive program that includes financial measures to strengthen macroeconomic balance immediately."