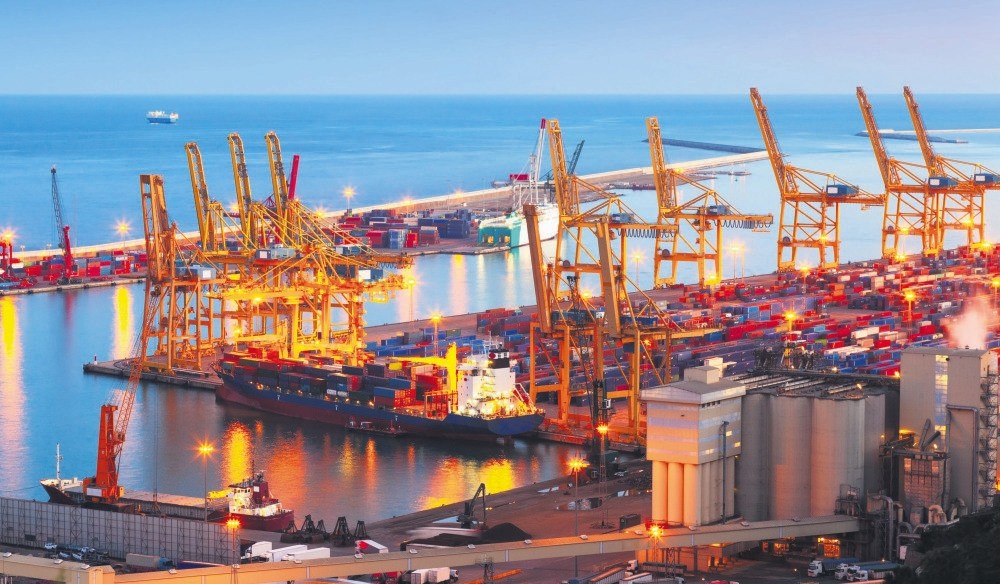 The latest salvo in a trade conflict between the world's biggest economic powers was fired on July 6 when U.S. tariffs on $34 billion worth of Chinese goods came into effect.
by Daily Sabah Jul 10, 2018 12:00 am

Turkey could gain an advantage from the trade wars between the U.S. and China by increasing exports to these countries and expanding into alternative markets

The trade war between the two largest economies of the world, U.S. and China, officially began on July 6 when the U.S. tariffs on $34 billion of Chinese imports took effect. As this was considered to be the first round of the conflict, Turkish business figures claim that Turkey may benefit from this trade war by making way for itself in exports to both countries and expanding its presence in other countries.

Ali Osman Akat, the chairman of the Turkish-American Business Association-American Chamber of Commerce in Turkey (TABA-AmCham), agreed with this notion. "Compared to the major actors of the crisis and the import and export figures of the major parties of the war, we know that one of the least affected countries will be Turkey," Akat said.

In a statement to Anadolu Agency (AA), Akat stressed that the global forces are entering the trade war instead of fighting and getting wounded like they used to, and that they continue to fight by producing strategies that will neutralize weapons and by conducting projects that will bring an advantage.

"Now the wars have been replaced by global trade wars," Akat said and pointed out that the U.S. and China's tariffs will affect everything. "Today, there is no sector, manufacturing or trade that is not interconnected. Everything is connected from mining to tourism, from tech's peak to agriculture. No farming is possible without tractors, no tractors without iron, and no iron without technology and raw material."

"There is no sector that is not affected from all this. There is no point in which industry to be affected first in a trade war at this size, because after one step the battle fever is reflected on the others," he added.

Akat said Turkey could benefit from the trade war, saying that opportunities exist within all crises.

He stressed that if the developments are read correctly and preparations are made well, serious benefits can be produced.

"As TABA-AmCham, we have acted with Turkish businessmen and industrialists by rapidly revising our high value-added projects that Turkey can generate serious gains from since we heard the footsteps of this crisis," Akat said.

Suggesting that compared to the major actors of the crisis and the import and export figures of the major parties of the war, one of the least affected countries will be Turkey, Akat said, "For example, we will be less negatively affected by the big deficit between our exports to the U.S. and our imports, but we have difficulties in manufacturing based on imports. In order to overcome this, our project to build Turkish organized industrial zones in the U.S. to produce and sell there has become very important for us. Now that it is difficult to produce in Turkey and sell in the United States, we can produce there and sell to the giant U.S. market."

Meanwhile, Chinese importers also look to import certain food products from Turkey because of the conflict with the U.S. For instance, a delegation consisting of procurement authorities in the Guangdong Imported Food Association established in the People's Republic of China and five importing companies, members in this association, held bilateral business talks with 30 companies from the Aegean Exporters' Association.

The Chinese companies said that the negotiations were very productive and that they want to buy food products from Turkey that they are currently importing from countries such as Italy, Spain, Thailand and the U.S. They indicated they hope the visit significantly contributes to boosting trade between the two countries.

Some Chinese fruit importers were also reported to have intentions to replace the U.S. with Turkey in cherry imports.

Regarding the fact that the U.S. put an additional 25 percent tariff on some products imported from China, Turkey Exporters' Assembly (TİM) Chairman İsmail Gülle said there would not be a winning side in the trade wars, and that these obstacles would negatively impact global trade and, consequently, global welfare.

Gülle assessed the U.S. administration's decision to put more than a 25-percent tariff on over 800 products worth $34 billion imported from China, as well as possible trade wars that could spread all over the world. Stating that it is historically proven that there would not be a winning side in the trade wars, Gülle recalled that world trade, which was down to $16 trillion in 2015 and 2016, recovered in 2017, reaching $17.4 trillion.

Gülle noted that world trade is expected to increase further this year and reach $19 trillion, indicating that despite the positive outlook in global trade at the moment, the most important obstacle in front of the world is the protectionist policies implemented by the United States, which have turned into a trade war with the response of other countries. He said the United States has always been an important trade partner of Turkey, ranking fifth in exports with $8.7 billion last year and fourth in imports again with $11.9 billion.

"Steel and aluminum are among the most prominent products in our exports to the U.S. Of course, the additional tariffs on these products will affect our exports. However, if our firms move to alternative markets, this effect will be minimum," he said. Commenting on the U.S. decision put into effect on Friday, July 6, Gülle said that Turkey's exports of steel and aluminum to the U.S. hit $1.9 billion in 2017.

"The issue of removing obstacles in front of the trade is a matter that both TİM and our government are working diligently on. However, it is certain that the U.S. decision will have aftershocks," Gülle suggested. "China's additional taxes against this step, if the U.S. responds to these taxes once again, will affect not only the U.S. and China, but indirectly all the countries of the world."

The trade war between the U.S., China and the EU will not affect Turkey's automotive exports. The impact of this competition on the Turkish automotive industry will be less than expected. As the leader of Turkey's exports with $30 billion, the automotive sector plans to close exports to the U.S. with $1 billion with a loss of $400 million compared to last year. The Turkish automotive industry has studied the impacts of a trade war on Turkey, compiling a report of its findings: The competition has cost $400 million for Turkey.

Speaking about the customs tariffs applied by the U.S., Haydar Yenigün, the chairman of the Automotive Industry Association, said that the U.S.' protectionist policies against imports which have been on the rise in the recent period indicate that the international trade will go beyond the common lines in the upcoming period.

"It is crucial for Turkey to closely follow the policies and to take necessary measures in a timely manner by taking the opinion of the real sector," he underlined.