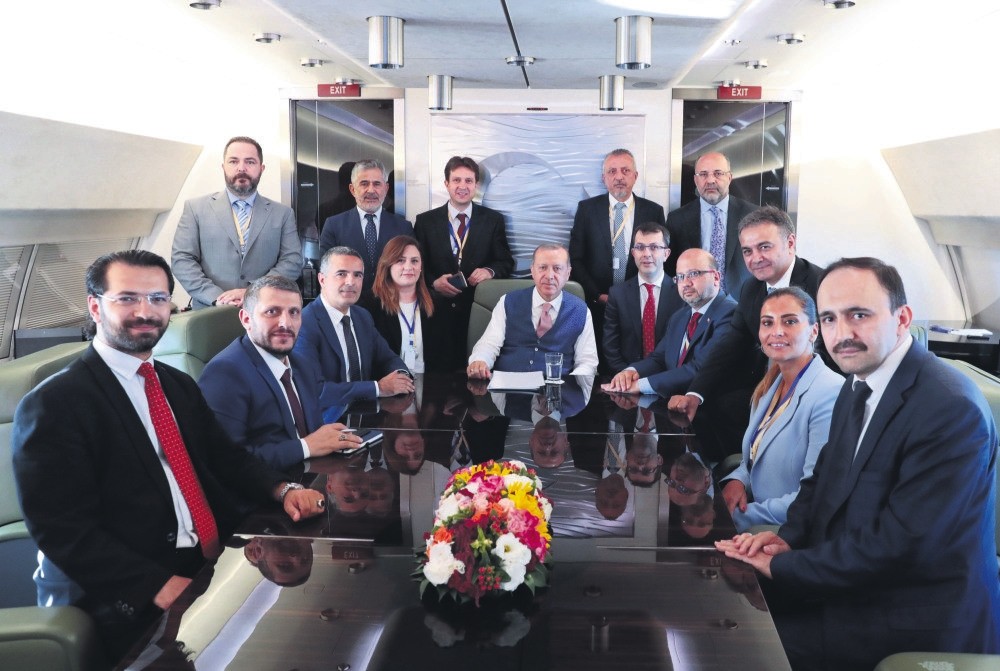 President Erdou011fan emphasized that Turkey has shifted to new era with a strong economy team that would make current conditions of the country better.
by Nur Özkan Erbay Jul 12, 2018 12:00 am

With experts taking charge of the Turkish economy, the new Cabinet's approach will be to create an investment and market-friendly environment, said Erdoğan

Turkey is on the right track along with the new presidential government system, especially with the new economic team, President Recep Tayyip Erdoğan told journalists accompanying him on his first official visit abroad on Tuesday, after being re-elected on June 24. "Turkey is on the right track. The flow of credits given by international financial institutions to investors that invest in Turkey is clear evidence of that. In fact, we have procured the financial needs of the Çanakkale 1915 Bridge from those institutions. There is no difficulty on that matter. We will handle our own. Our conditions will be way better," Erdoğan said on his way from Azerbaijan to Northern Cyprus, two countries Turkish presidents traditionally visit when they are first elected.

Touching upon Turkey's new economic team, Erdoğan highlighted the features of the team and stated that all members of the economic team are well suited to their positions.

"Our new Trade Minister Ruhsar Pekcan was a successful business woman who was working in her field previously. I believe her and my expectations are very high in terms of her intense work on our export and import volume in the new term. Our new Culture and Tourism Minister Mehmet Ersoy also comes from the field, and he was the leader of the number one tourism operator in Turkey. Our new Minister of Treasure and Finance Berat Albayrak has both practical and theoretical expertise as well as an academic background in finance and the private sector. I also believe in him to put the economy in order successfully," he added.

The president strongly emphasized that Albayrak will strive to implement the necessary policies. To tweak matters that need immediate attention, the president indicated that both public and private banks will step in.

"It is only possible for investors to carry out projects if they are enabled and both private and public banks will hopefully endeavor to provide the necessary climate for investors," Erdoğan said.

Turkey's first Treasury and Finance Minister Albayrak took over duties from former Finance Minister Naci Ağbal and former Deputy Prime Minister Mehmet Şimşek, who was in charge of the Treasury in the previous system. He already conveyed the messages on Tuesday that the markets had been waiting for at a ceremony in Ankara. Minister Albayrak vowed that Turkey would be more integrated with global markets from East to West.

Hinting at the monetary and fiscal policy to be implemented in the upcoming period, Albayrak stressed that Turkey will act more swiftly and that fair and transparent policies will be executed within the framework of a private-sector mindset, ensuring that Turkey will closely work with international and national stakeholders on these policies.

Erdoğan announced on Monday, following the oath-taking ceremony, that Pekcan would be the new trade minister. Pekcan was the deputy chairwoman of the Women Entrepreneurs Council in the Union of Chambers and Commodity Exchanges (TOBB).

For the new cabinet, he also announced the new Culture and Tourism Minister Mehmet Ersoy, who was the chief executive of the private company ETS Tourism.

Erdoğan was asked also how the Ministry of Finance and Treasury would work together after being unified in the new cabinet. He said that both ministries had been a single ministry before and that they had not been successful when divided.

"We have seen the outcomes of this division and preferred to unify them again. There are very important sub-councils and institutions under this ministry in the new system. Along with this step, our ministry will be a way strong resource to supply the financial needs of the state," he concluded.

Ministries to have stronger support

In relation to the new system regarding the ministries, Erdoğan stressed that the ministries should be strong and added, "It will be possible to have more than one deputy minister."

He underlined that in some ministries there might be three deputy ministers. There will be a decrease in the number of high-level administrators as one of the features of the new system is its simplicity, he added.

Erdoğan announced Fuat Oktay as his sole vice president. However, Erdoğan stated in the future he might appoint a second vice president if necessary. He pointed to the previous success of Oktay in his post at the Disaster and Emergency Management Presidency (AFAD) and stated that he would reflect these in his new post as well.

Referring to the re-appointment of Foreign Minister Mevlüt Çavuşoğlu, Interior Minister Süleyman Soylu and Justice Minister Abdülhamit Gül, Erdoğan stated that all three ministers have proven themselves in their posts.

It was noted that prominent figures from various private sectors found a place in the Cabinet formed by Erdoğan who highlighted the previous achievements of each minister.

Erdoğan also stated that the issue of tying the General Staff to Ministry of Defense would be evaluated within the framework of the new system.

According to the European Union acquis communitaire in 2014, a process to merge the General Staff to the Ministry of Defense was required, yet it did not take place. Erdoğan underscored that there are no obstacles to merging them. He stated that Hulusi Akar was appointed as the new national defense minister and immediately Turkish Land Forces Commander Gen. Yaşar Güler was appointed Chief of General Staff under a new presidential decree, as there should not be any vacancy in the Turkish Armed Forces during the process.

According to the new system, nine separate councils will develop, supervise and coordinate relevant policy suggestions. The main priority will be a more effectively run government by delegating responsibility with authority.

"There are councils and presidencies. The number of presidencies is 11, but it might increase," Erdoğan said, adding the heads of some presidencies will be appointed following negotiations.

He commented that there would be no confusion regarding the authorities of the councils. Erdoğan indicated that he would have a deputy in each of these councils who will preside over meetings when the president is absent. "The fields of these councils will be in line with that of ministries," he said.

Regarding the finance office, Erdoğan said, "The office will be directly tied to the presidency and will focus on finding sources."

Fight against terrorism will continue resolutely

On June 9, the deputies of the main opposition Republican People's Party (CHP) and pro-PKK Peoples' Democratic Party (HDP) did not stand up when Erdoğan took oath in Parliament's General Assembly. Commenting on the issue, Erdoğan stated that he does not mind whether they stand up or not; yet he underlined that their stance is a sign of disrespect to 26,334,000 people who voted for him to become president. The CHP deputies also protested when Interior Minister Süleyman Soylu was sworn in on Tuesday. In relation to the opposition's stance toward Soylu and Hulusi Akar who became the national defense minister, Erdoğan said that these people had actively worked to provide national security and fight against terrorism.

"If an alliance is formed against these people, this is significant in revealing their real identities," Erdoğan said, while stressing that Turkey will not step back from its fight against terrorism.