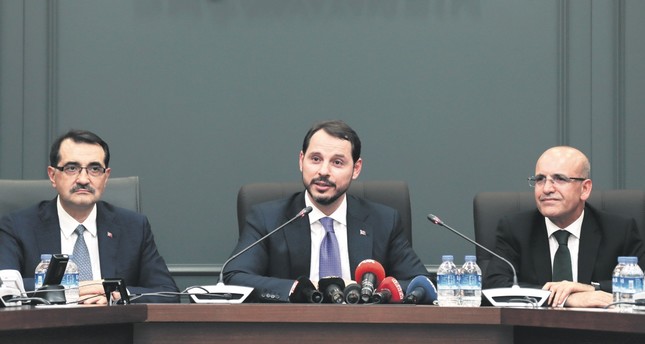 Treasury and Finance Minister Berat Albayrak (C) pledged yesterday that the operational capacities of the central bank will be widened to ensure price stability and that the bank will be more active than ever in the upcoming period.

Berat Albayrak, the first Treasury and Finance Minister in the new presidential governance system, yesterday elaborated on the monetary and fiscal policy that is set to be implemented. Albayrak assured the markets that the independence of the Central Bank of the Republic of Turkey (CBRT) and its decision-making mechanisms cannot be the subjects of speculation. He added that the bank will carry out the policies required by market conditions. In addition to the implementation of policies and reforms required by market dynamics, the minister stated that coordination with international financial actors and stakeholders will increase the flow of diversified external resources into Turkey.

Minister Albayrak said that the capacities of the CBRT will be widened by opening the clogged structural channels for stabilizing prices and cutting down inflation and strengthening policy coordination. "The policy in the new period aims to render the central bank more effective than ever," he said. He added that the "fundamental priority" in the upcoming period would be fighting inflation. "We will take steps to bring inflation down to single digits in the shortest possible time and eventually match our target," he said.

A more predictable and stable macroeconomic outlook in Turkey could clearly be established by achieving low inflation rates, and that it would be essential for the central bank, whose main objective is to provide price stability, to implement its monetary policy in a strong manner.

As noted in the country's medium-term program (MTP) introduced last September, inflation is targeted to converge to 5 percent through the end of 2020.

"In the new period, we will be supporting the central bank's implementation of a more predictable, simple and determined monetary policy in line with the objectives," Albayrak continued. "As the government, we will support the monetary policy by removing the structural obstacles that may limit the effectiveness of these policies as much as possible and strengthening the policy coordination."

Replying to a question on the real sector's unpaid bank debts, Albayrak said that the banking sector's performance is one of the strongest sides of the Turkish economy, noting that the sector's capital adequacy ratio stands at 16.4 percent, well above the world average.

"The restructuring demands of some well-known firms, which have been reflected by the public, constitute the basis for this question that you have led regarding the investors. However, the restructuring transactions cover maturity extensions in line with the cash flows of the credit periods required by the banking sector and are generally not common," Minister Albayrak said, highlighting that the institutions are conducting the necessary studies for financial stability.

The treasury and finance minister underscored that the fiscal discipline will continue without compromise and the ministry will carry out structural reforms that will ensure the compliance of costs with the budget.

The fiscal discipline will effectively continue in accordance with the budgetary goals of the Medium-Term Plan.

"The government has a high capacity to devise a problem-solving framework with a holistic approach," the minister stressed.

"The macroeconomic goals will be achieved thanks to the economic policies to be implemented with resolution and consistency. The harmony of economic policies will be kept at a maximum. With the coordination of firms and financial sectors, the interest of local and foreign investors will grow," the minister said.

Albayrak, also the head of the treasury, further highlighted that cooperating with all the actors and stakeholders in international financial markets, the ministry will increase the entry of external capital to Turkey and diversify resources.