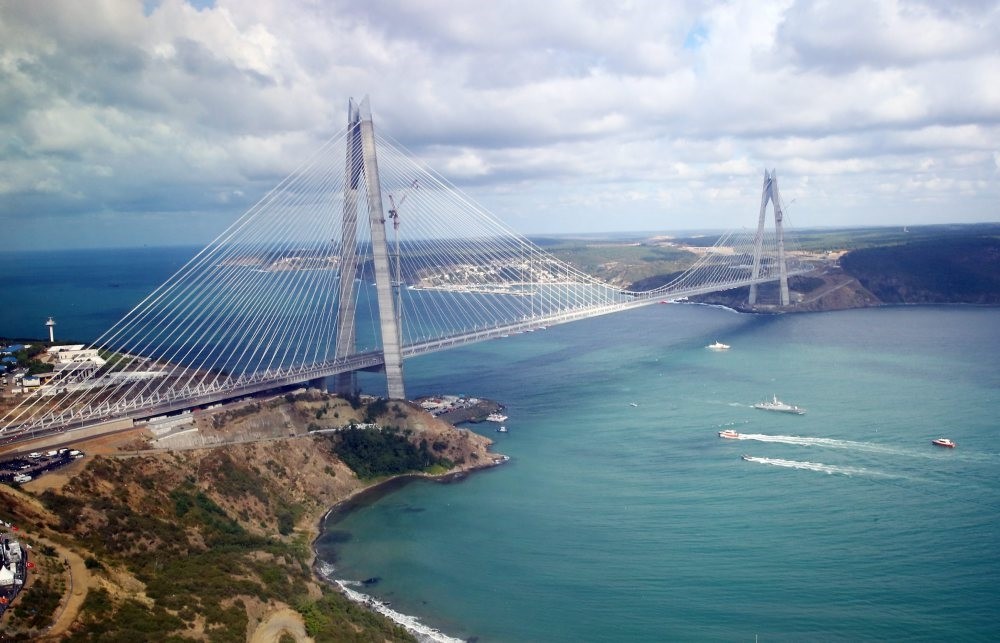 South Korean firms have been involved in a number of Turkey's megaprojects, including Yavuz Sultan Selim Bridge (above), Eurasia Tunnel and u00c7anakkale 1915 Bridge.
by Daily Sabah with AA Jul 27, 2018 12:00 am

The friendship between Turkey and South Korea, which began with the Korean War, has also been reflected in the economic ties between the two countries. Total investments by Korean firms in Turkey in the last 38 years have stood at around $2.6 billion with 70 percent invested in the last five years

"Blood brother" is the most commonly used term to express the relations between Turkey and South Korea. The roots of the strong ties between the two countries go back to the Korean War that ended on July 27, 1953. The friendship, which began with the war that contributed to the strengthening of the bilateral ties, was also reflected on the economic relations of the two countries.

Turkey joined the Korean War under U.N. Command during 1950 and 1953 in efforts to support South Korea in its struggle for freedom, democracy and independence, where a total of 741 Turkish troops were killed during the war. The heroic fight of Turkish soldiers during the Korean War was not only effective in winning the war, but it also enabled our deep-rooted friendship with the Korean people to evolve into a unique "blood brotherhood."

Many people will remember the 2002 FIFA World Cup hosted in Korea and Japan, which was one of the major milestones of the closeness of the two countries. It was the year when the Turkish national football team enjoyed its first major international success.

With the incredible backing of Korean supporters during the games, Turkey reached the semi-final. What surprised many was that the third-place playoff match ended up between South Korea and Turkey. The overwhelming feeling of friendship in that game made it one of the most memorable sports matches ever. Masses of Korean fans, whose cheers echoed across the home ground stadium, were also waving the Turkish colors to show support for the Turkish national team. The two teams celebrated together and showed exemplary images of friendship. The flags of both nations were seen side by side on the stands and both teams' players saluted the crowds arm in arm, creating a friendly atmosphere that continued long after the match

Aside from football the relationship between the two countries exists in the world of business as well as South Korea has accelerated its investments in Turkey. To the world, the country is known for its export-oriented development model and social and economic development it provided in the Far East.

According to the data compiled from the South Korean Embassy in Ankara, the Foreign Economic Relations Board (DEİK) and the Turkish Statistical Institute (TurkStat), the total amount of the investments carried out by Korean companies in Turkey from 1980 to 2017 reached $2.63 billion. Korean firms made investments totaling approximately $1.73 billion only in the last five years, which corresponds to 66 percent of the total investments made in the 38 years.

TRADE VOLUME UP 10 PERCENT IN 5 YEARS

Wholesale and retail trade, automotive, IT and electronics, mining, tourism and manufacturing industries stand as the most common areas where the 300 Korean companies that have investments in Turkey are currently operating.

The trade volume between the two countries, which stood at $6.5 billion in 2013, reached $7.2 billion last year, an increase of 9.8 percent. Turkey exported goods totaling around $584.1 million to South Korea last year, while its imports totaled $6.6 billion in the same period.

South Koreans have also contributed to the development of tourism between the two countries.

The number of Korean tourists who visited Turkey in 2017, the 60th anniversary of the establishment of the diplomatic relations between the two countries, stood at 120,622.

The same figure was 106,904 a year before. The number of Koreans that visited Turkey in first five months of this year reached 59,208.

The investments and megaprojects implemented by Turkey have, especially in the recent period, attracted great interest of South Korean firms.

On the 60th anniversary of the establishment of the diplomatic ties, then-Prime Minister Binali Yıldırım paid a visit to the country accompanied by ministers and Turkish bureaucrats to discuss bilateral political, economic and commercial relations.

As part of his trip, Prime Minister Yıldırım addressed a group of South Korean businesspeople.

"I can gladly say that in recent years, South Korean firms have been involved in a number of prestige infrastructure projects of our country such as the Eurasia Tunnel, Çanakkale 1915 Bridge, Yavuz Sultan Selim Bridge, airports and even in the railway sector and in electricity and energy projects. We want these assets to continue to increase from now on," he said.

Hyundai and SK E&C were among the contractors of the Yavuz Sultan Selim Bridge, and the latter is also currently engaged in the construction of the Çanakkale 1915 Bridge with other South Korean firms and Turkish contractor Limak.

SK&EC was also one of the contractors of the Eurasia Tunnel, an undersea tunnel project that connects the European and Asian sides of Istanbul, with its Turkish partner Yapı Merkezi.

Holding the market leader position in solar panel sales in Turkey, Hanwha Q-cells made its most significant investment in Turkey in March 2017 when the company was contracted for the 1-gigawatt (GW) Konya-Karapınar Renewable Energy Resource Areas (YEKA) solar power plant project with its Turkish partner Kalyon Energy.

As part of the project, which is estimated to cost $1.3 billion, a solar panel facility with a production capacity of 500-megawatt photovoltaic module and a research and development (R&D) center will be established.

President Recep Tayyip Erdoğan also paid a two-day official visit to South Korea in May, during which he was accompanied by a large delegation of ministers and Turkish businesspeople.

During the visit, the two countries inked four bilateral agreements on cooperation in higher education, information, telecommunication, space and satellite technologies, industry and energy and health and medical science.

Erdoğan had stressed during the visit that the participation of South Korean companies in Turkey's Kanal Istanbul project, a canal parallel to the Bosporus that is planned to connect the Black Sea and Sea of Marmara, will be a source of pride for the country. Lastly, South Korean construction company SK Engineering & Construction had expressed plans to partake in the construction of one of Turkey's biggest projects, Kanal Istanbul.