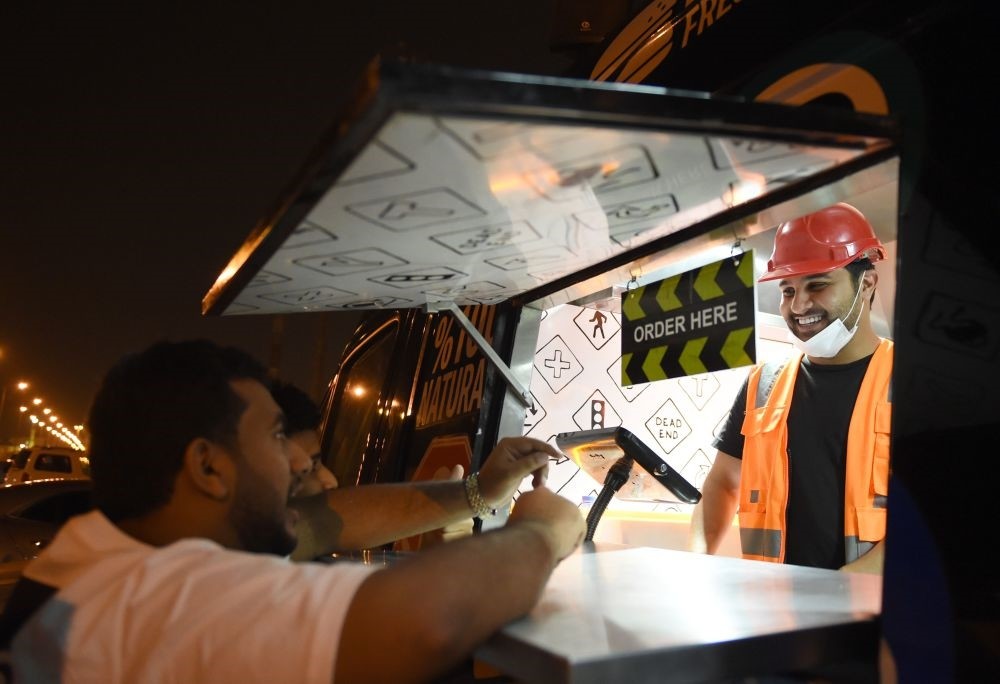 Dishing out burgers and fries slathered with melted cheese, One Way Burger is like any other trendy food truck in Riyadh. But it offers something rare - the cook behind the sizzling hot grill is a Saudi. In the once tax-free petro-state, which long offered its citizens cradle-to-grave welfare, blue-collar occupations such as cooking, cleaning and working at gas stations have largely been the preserve of foreign workers, who far outnumber Saudis. But Saudis are increasingly taking on such low status jobs in a new age of austerity when gas is no longer cheaper than water, with the government trimming oil-funded subsidies and tackling sluggish economic growth and high unemployment.

"When I started this food truck two years ago many people said: 'What'? You will sell burgers and sandwiches in the street? You come from a big family and big tribe'," said Bader al-Ajmi, the 38-year-old owner of One Way Burger.

"People were surprised," he added, as a Porsche pulled up at the side of his truck to place an order. Since Ajmi started his business, dipping into his personal savings, owning a food truck has become the trend du jour and attained a level of respectability. Working inside as a cook apparently still has not. Still, many Saudis, long reliant on the welfare state for secure and undemanding white-collar jobs, are embracing manual labor jobs. For the first time, a new crop of nationals is working as tea sellers and car mechanics. Posh Lexus-owners work as Uber drivers for spare cash.

"Will Saudis ever work as street cleaners?" columnist Abdulhadi al-Saadi recently asked in the daily Saudi Gazette. "Some people will look down at this proposal. They should know that nations only rise on the shoulders of their own people," he wrote.

Last December, residents of the eastern Al-Ahsa region feted a handful of young Saudis who swallowed their pride to do another job long deemed dishonorable - working at a gas station.

"There is no shame in this work," a gas station customer said in a Snapchat video.

It remains unclear how many nationals have moved into blue-collar jobs but the trend defies a popular maxim among Saudis: "They (expats) work for us, we don't work for us."

"The social stigma surrounding certain types of manual or service-based labor has been strong, but economic necessity is pushing many to take such jobs regardless of their social status."

Cultural attitudes to work are changing amid a major retooling of Saudi Arabia's lagging economy, with the country seeking to wean citizens off government largesse as it prepares for a post-oil era. Nearly two-thirds of all Saudis are employed by the government, and the public sector wage bill and allowances account for roughly half of all government expenditure. Saudi economist Abdullah al-Maghlouth said the new economy will push more Saudis to become plumbers, carpenters and tailors, jobs that were acceptable decades ago in the pre-oil boom era.