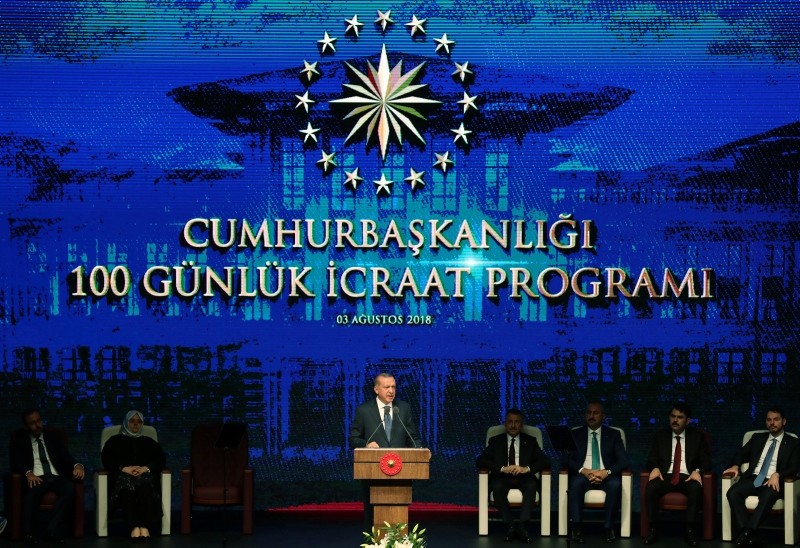 The action plan for the first 100 days of the new Cabinet includes 400 projects to be accomplished with a budget of TL 46 billion in diverse sectors including energy, tourism, finance, transportation and agriculture

President Recep Tayyip Erdoğan disclosed Friday the action plan that includes 400 projects to be accomplished during the first 100 days of the new presidential governance system that took effect on July 9 when the president took the oath of office. Heavily focused on economic projects, Turkey is determined to continue investments in numerous sectors while diversifying the borrowing instruments, for instance with Chinese bonds, the renminbi-denominated bonds from a non-Chinese issuer.

The first 100-day action plan includes numerous goals including but not limited to energy, economy, industry, foreign trade, environment and urbanization, defense, education, health, technology, tourism and agriculture as well as public finance. The execution of 400 projects with an investment value of TL 46 billion ($9.1 billion) in the first 100 days will be coordinated and monitored by Vice President Fuat Oktay.

Speaking at a ceremony at the Presidential Palace Complex in Ankara, President Erdoğan noted that each one of the 16 ministries have prepared a list of prioritized projects in due consideration of budgetary discipline and a total of 1,000 projects have been determined, with 400 of them listed in the 100-day action plan.

Elaborating on the massive projects of the Environment and Urbanization Ministry, President Erdoğan particularly highlighted the determination to carry out Kanal Istanbul, a project that is devised to construct an alternative strait to the Bosporus by connecting the Black Sea to the Marmara Sea in northern Istanbul. Within the scope of the action plan, the environmental impact assessment and survey project works of Kanal Istanbul will be submitted for approval and the project is planned to be completed by 2023.

One of the major aspects of the 100-day action plan are the goals set by the Treasury and Finance Ministry which will try to cut back inflation, ensure efficient management of public finance resources and execution of fiscal policies. In order to ensure the efficiency and savings of public spending, nearly TL 40 billion of the official budget is to be managed under one account, and TL 3 billion to TL 4 billion of additional income will be generated annually, the president said.

Another striking novelty in the new period will be seen in the diversification of foreign borrowing instruments. To that end, Erdoğan explained, Turkey has recently drawn investments from China. "In order to diversify its foreign borrowing resources, Turkey is issuing Chinese Yuan denominated bonds for the first time," the president said.

In terms of development banking, Turkey will introduce a development banking system similar to the ones implemented in developed countries. "The development bank will enable the decrease in the current account deficit and support the manufacturing of high added-value technological products," Erdoğan said. According to the 100-day action plan for the Trade Ministry, the number of customers of the Export Credit Bank of Turkey (Türk Eximbank) as well as the share of small and medium-sized enterprises among the total customers of the bank are aimed to be increased.

A digitalization of customs procedures and service through a single window system is also planned.

The government seeks to identify new countries and cities where 35 new Turkish Trade Centers will be established in addition to the existing five, with an aim to increase the country's trade volume.

It also aims to establish a new generation of Free Zones and direct the existing Free Zones towards value-added investments and exports.

The country also is also seeking the establishment of a "Trust Stamp in Electronic Commerce" system, which will include an international symbol for enhancing security and service quality in e-commerce.

The government will also work to strengthen the foundations of trade and economic relations with the U.K. in the post-Brexit period.

The Turkish contracting-consultancy sector is expected to organize a second Africa Economic and Business Forum, which will include the promotion of Eximbank and Turkish banks.

Energy has become one of the major sectors that saw profound development over the last 15 years. The installed power capacity of Turkey was only 32,000 megawatts in 2002 and it was raised to 85,530 megawatts last year. President Erdoğan highlighted that Turkey will continue heavily investing in energy projects to boost its natural gas storage capacity and to become an energy trading hub.

"Turkey will continue its hydrocarbon exploration activities in the Mediterranean and drill first wells in the upcoming period," Erdoğan said. The president also announced that the country will buy the second drillship soon.

As for the action plan considering the Industry and Technology Ministry, the government aims to establish High Technology Support Programs for the development of high-tech products with domestic resources. It also aims to provide a financial support of TL 1.225 billion to small and medium-sized enterprises (SMEs), especially to the technology and manufacturing sectors, for domestic and national production.

Among other goals, the opening of the Turkey Space Agency and development of indigenous satellite and satellite technologies are also planned. The government also seeks to carry out projects regarding information and information security.

The government also aims to increase the number of research and development (R&D) centers by 9 percent to 1,000 centers and and design centers by 8 percent to 27, respectively. It also seeks to complete the master plan of the Ceyhan Energy Specialized Industrial Zone.

It also aims to inaugurate production facilities on an area of 22 hectares for defense industrial plants in the Karasu individual investment site.

Erdoğan announced that consulates generals in Iraq's Mosul and Basra will be re-activated within the scope of the action plan.

Speaking about Turkey's relations with the U.S., he said: "We expect Turkey's cooperation with US regarding Syria's Manbij to continue without being affected by other problems."

The Manbij deal between Turkey and the U.S. focuses on the withdrawal of the PKK-affiliated People's Protection Units (YPG) from the northern Syrian city and stability in the region. It envisaged deployment of Turkish forces to assure peace in the region and train local forces to establish and maintain security.