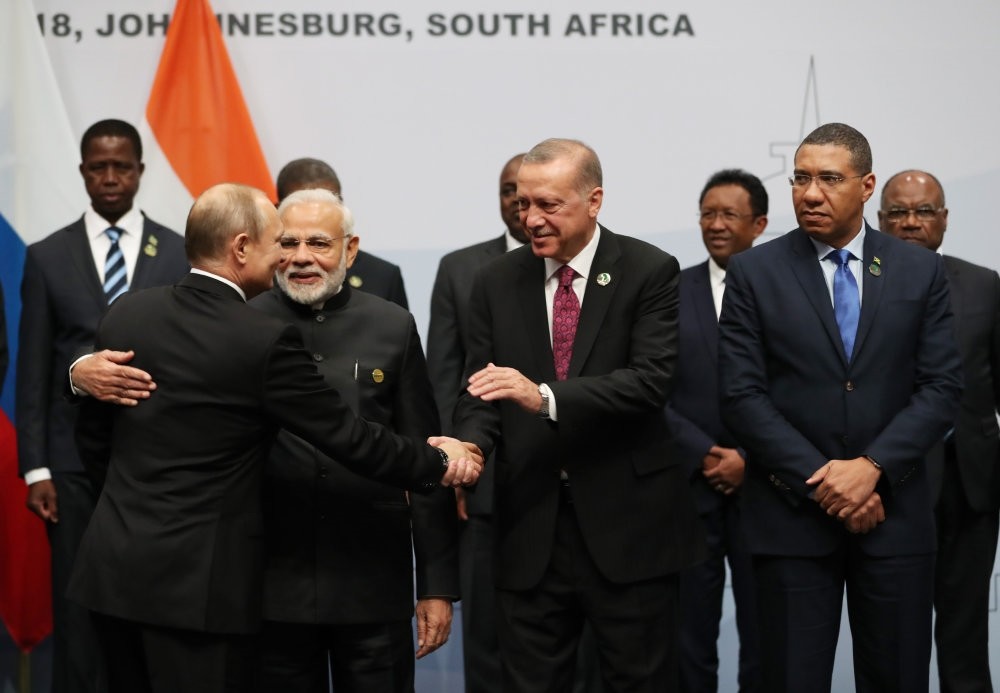 Turkey's developing close ties with Brazil, Russia, India, China, South Africa (BRICS) and the Eurasian Economic Association (EEA) would provide significant gains for all parties, experts assessing the country's possible membership in the two alliances have said. Konstantin Korishchenko, head of the stock market and financial engineering department at the Russian Presidential Academy of National Economy and Public Administration (RANEPA), elaborated on the ongoing development of the Russian economy despite the U.S. sanctions and the possibility of Turkey's membership in BRICS and the EEA.

Pointing to the advantageous position of the U.S. in the global economy, Korishchenko said, "The U.S. dollar continues to be used extensively in world trade, and has a considerable control over the capital flow of the banking system. This is why the U.S. administration is very keen to use the economy as a trump card. However, history is demonstrating that these approaches could have very controversial consequences as in the examples of the Soviet Union, Iran, North Korea and Cuba."

Despite the U.S. sanctions, the Russian economy has continued to develop thanks to macroeconomic factors such as low public debt, strong payment balance and narrow budget deficit, the former deputy head of the Russian central bank noted.

"What's more, sanctions in areas such as agriculture have a positive influence. Some steps banned by the World Trade Organization (WTO) can be implemented under 'protective measures,'" he added.

The most logical step for Russia in the face of "partly permanent sanctions" by the U.S. and the European Union is to develop business cooperation with the rest of the world, according to Korishchenko. He suggested that they observed that the Russian business world and its diplomacy have embarked on increasingly mutual activities with BRICS, the EEA and the Shanghai Cooperation Organization (SCO).

He also argued that Turkey's membership in BRICS and EEA would provide benefits for all parties.

"While BRICS is providing some investment sources for Turkey, important advantages can be provided in trade with the EEA such as 'zero tariffs,'" he added.

As the term chair of the Organization of Islamic Cooperation (OIC), Turkey was invited to the 10th Leaders' Summit of BRICS countries, which was held in South Africa's financial capital, Johannesburg on July 25-27.

President Recep Tayyip Erdoğan's participation in the summit was the first high-level official contact between BRICS and Turkey.

After attending the summit, President Erdoğan told reporters that he suggested Turkey's inclusion in BRICS, coining the term BRICST.

"They responded positively. China is definitely for expansion," he said.

All of the other four members of BRICS are fellow members of the G20, Erdoğan said, adding that he believed BRICS membership would allow Turkey to establish incredibly profitable channels of communications throughout the world.

"I believe we should welcome our inclusion in such groupings," the president said.

Speaking on the sidelines of the summit, Erdoğan said Turkey sees the BRICS summit as an opportunity to develop collaboration between the two sides.

"Turkey wants to work with BRICS countries, especially in the fields of economy, trade, investment and development," he noted.

Trade by BRICS countries corresponds to 23 percent of global trade, while the gross domestic production (GDP) in these countries makes up more than half of global economic growth. The BRICS countries produce one-third of the global industrial products and half of the agricultural produce.

Turkey's trade volume with BRICS countries in 2017 was calculated at $60.7 billion. The country's total exports to the five BRICS members were $7.3 billion, while its imports from these countries hit $53.4 billion.

BRICS AND EEA QUITE POSSIBLE

Oleg Shibanov, a professor of finance at the Moscow-based New Economics University, said that with sanctions, the U.S. has violated a number of international rules such as the WTO's rules and obligations for free trade.

He noted that the authorities in charge of the Russian economy have made important and correct decisions to deal with the difficult situation caused by the sanctions.

"Russia's budget stabilized within three years after first sanctions and now it has a budget surplus. Thanks to the fiscal policies the Russian ruble managed not to go downhill, while inflation remained at a low level. Countries exposed to sanctions have to make very accurate decisions in terms of fiscal policies," Shibanov said.

Russian inflation hit 2.5 percent in July with a 0.2 percent increase from the previous month, the highest since December 2017.

Shibanov said he sees Turkey's BRICS and EEA membership possibility as "quite likely."

"Turkey is an important and extremely fast-growing country in terms of both economic and political sense. BRICS and EEA will benefit from Turkey's membership," he said.

U.S. ISOLATING ITSELF by

using sanctions languageThe sanctions by the U.S. were not surprising for Russia and it was not affected by it because of the preparations they made accordingly, Boris Pivovar, an assistant professor at RANEPA's Faculty of Economic and Social Sciences, said.

Pivovar, who said Russia is also carrying out partnerships with a number of other countries aside from the U.S., indicated that Russians have a special mentality.

"We have had enemies throughout our whole history and we work hard in these tough periods. Turkey is also an extremely proud country and therefore our countries do not buckle under sanctions. The U.S. is only isolating itself by using this sanctions language," Pivovar concluded.