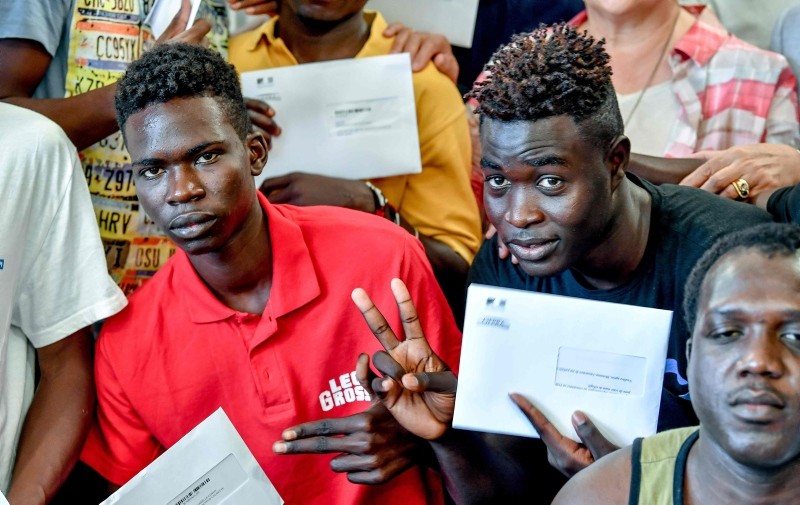 Sudanese migrants arrived in France with the rescue ship Aquarius pose with their refugee identity certificates after a ceremony at the City Hall in Llille, northern France, on August 3, 2018. (AFP Photo)
by French Press Agency - AFP
Aug 09, 2018 12:00 am

French hotel and restaurant owners are lobbying the government to regularize more illegal migrants in order to fill 100,000 jobs for which they have found no French takers.

"Companies are finding no one, which is why we want to facilitate the integration of refugees in our businesses," he said.

France, like many developed economies, is struggling to fill low-paid, manual jobs. Turnover is high in the hospitality sector, where kitchen work and cleaning jobs are seen as particularly unattractive by many.

At a meeting with government in mid-July, industry representatives called for measures to make it easier to hire migrants.

In an interview Wednesday, Heguy said the industry was in a position "to issue 100,000 job contracts straight away", half of them for permanent positions and half for seasonal jobs.

Under French law, refugees can work once they get their papers but asylum-seekers must wait nine months after filing their claim for refugee status before taking up a job.

An immigration bill passed by parliament last week -- but which President Emmanuel Macron has yet to sign into law -- cuts the waiting time to six months.