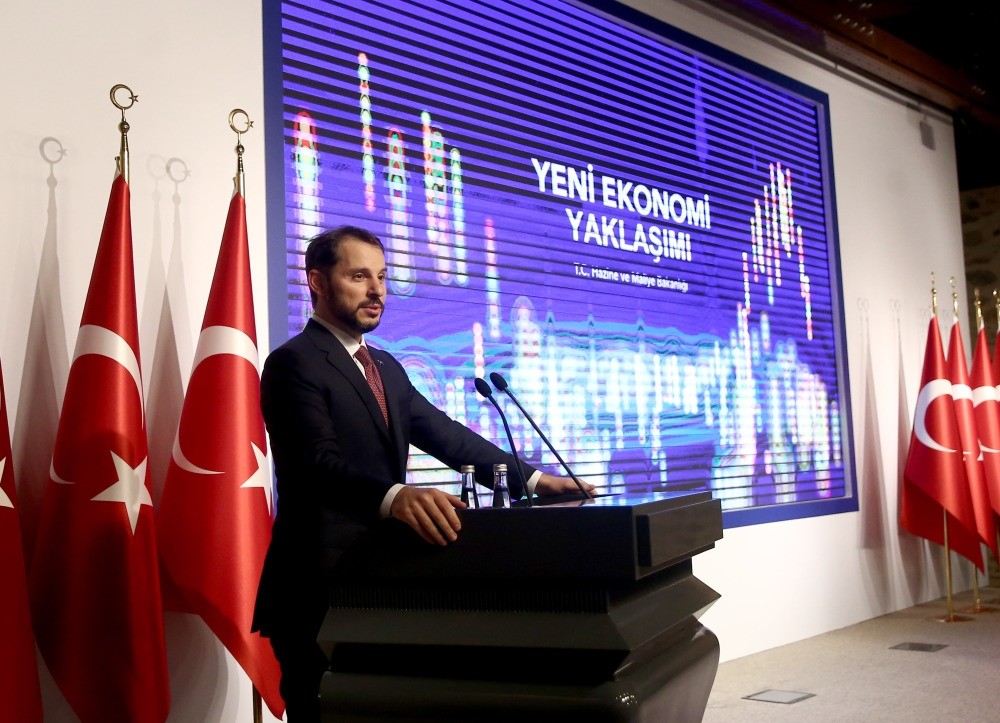 Treasury and Finance Minister Berat Albayrak speaks during a presentation of the government's new economic approach, Istanbul, Aug. 10.
by Daily Sabah Aug 11, 2018 12:00 am

Treasury and Finance Minister Berat Albayrak unveiled Turkey's new economic perspective. The minister said the government's principle will be to carry out tight monetary and fiscal policy, while highlighting the independence of Turkey's central bank

A new economic path for the Turkish economy devised by Treasury and Finance Minister Berat Albayrak and his team in consultation with all stakeholders, including leading businesspeople, prominent scholars and relevant business associations, was announced on Friday.

Dubbed the new economic approach, which aims to write a new economic story for Turkey, the plan emphasized strong commitment to tight monetary and fiscal policies to ensure economic rebalancing in the short term and emphasized the independence of the Central Bank of the Republic of Turkey (CBRT). While Turkey's new detailed Medium-Term Program (MTP) will be announced in September, the new economic approach has outlined a five-year foundation for the implementation of the program.

Since taking office, Albayrak has been holding meetings with stakeholders including scholars, businesspeople and representatives of business associations. He highlighted that the new economic approach has been shaped by the outcomes of these meetings and the ministry will continue its strong dialogue with stakeholders in preparation of the MTP that will enable Turkey to become one of the high-income countries, a goal the country has set as part of its 2023 vision.

One of the strong features of the new economic approach will be its sustainability, Albayrak said. He explained that the economic model will be able to generate strong reflexes and strategies while it will promote transformation in accordance with daily necessities.

The minister further explained the foundational principles of the new economic approach that will guide the implementation of the Turkish economy's macro policies. Strong communication with the markets and ensuring confidence in markets will be the first principle and will be strengthened with realistic policies compliant with market rules.

"Another principle is to ensure the full independence of monetary policies. The independence of the CBRT is of utmost importance. We will prioritize strong stability to enable all the financial sector actors to maintain their operations effectively," Albayrak said.

The central bank should closely monitor all the processes to sustain price stability, he added. Moreover, other principles will focus on budgetary balance, tight monetary and fiscal policies and harmonized fiscal and monetary policies.

The minister also previously said that new instruments will be introduced to deepen the Turkish capital markets as the country aims to draw more overseas investments to domestic markets.

Turkish capital markets indeed have seen great growth in the past decade with the entry of more players and diversification of instruments. One of the prominent platforms for domestic capital markets is Borsa Istanbul. This stock market, on which shares of 399 companies are currently traded according to the 2017 Capital Markets Board (CMB) annual report, ranked ninth among global stock exchanges on a U.S. dollar basis in 2017, seeing a 38 percent rise compared to the previous year. While the stock exchange benchmark index BIST 100 increased by 48 percent, the market value of stock certificates traded increased by 43 percent, reaching TL 880 billion ($173.5 billion). The companies raised TL 5.1 billion last year with capital increase and initial public offerings. The number of investors in investment funds increased in 2017, hitting 3 million, while portfolio size expanded by 25 percent, reaching TL 56 billion. There were 456 investment funds.

The number of individual pension fund investors increased by 5 percent, reaching 7 million last year. Portfolio size is about TL 78 billion, an increase of 28 percent. Turkey currently has 31 real estate investment trusts (REIT) at a value of TL 64.8 billion, and the number of venture capitals was 12 with a value of TL 4.9 billion. Furthermore, the minister also underscored the importance of balanced public spending.

"A very serious transformation process will begin in the fiscal system. There will be an intense fight in finance," he said, adding that together with a team that aims to run at the same pace as this change, they would set forth this change effectively.

Albayrak underlined that public spending will be planned according to the criteria predicted by the new economic model. Referring particularly to the incentive systems that are covered by the government budget, if a project manufactures technological products, increases exports, and contributes to reducing the current deficit, then it will be granted incentive.

"One of the key phrases of this new era is that we will manage the investments and expenditures more effectively in terms of the determined criteria," he said. "Expenditures are coming back to the treasury and finance minister. All ministries and public institutions will continue on their path in the harmonious way we have underlined."

Minister Albayrak explained that the new economic approach will have three pillars consisting of economic rebalance, sustainable growth and a fairer share of welfare.

"We will recover the environment of confidence and boost productivity and savings," he said adding, "Turkey also will deepen capital markets to diversify sources for financing public debt."

According to the minister, the fields of strategic growth will be identified, especially those with value-added, strategic and technological output in the second phase which will prioritize sustainable growth.

"We will focus on exports and cutting the current account deficit," he added.

In the third phase that will cover 2022 and 2023, economic policies will ensure a fairer share of wealth. To that end, the country's tax system will be also simplified and the government will aim for a productive Turkey, he stressed. Saying that Turkey will start a transformation process in its tax system, Albayrak explained that this would result in a fairer tax system.

The number of indirect taxes will be cut, while the government will fight the underground economy and bring down unemployment. The last and most supporting element of this three-pillar approach will be the qualified human resource that will be key in the successful implementation of all phases.

He added that skilled human resources and a strong society will support the three main phases of Turkey's new economic perspective.

Minister Albayrak also announced that a new financial regulatory authority will be established in the upcoming period. The legislative framework has been prepared and will be presented to the parliament in October. The new financial authority will work to enhance Turkish financial markets and will implement best global practices.

Avdagiç noted that they found the targets featured in the new model to be well-directed, such as a fairer fiscal system, a cost conversion in the public, a never-before-achieved saving, and a new financial regulatory authority. İTO Chairman stated that those who wanted to collapse the Turkish economy over the exchange rate would have to face the Turkish business world and the Turkish nation this time.

"As the business world, the newly announced model has given us hope, also showing that there is a bright future in the wake of recent troubles. It is very valuable to protect the Turkish busin​ess world in such a strategic period and point [at] a target," Avdagiç continued.

Recalling that the economic policy of Turkey that fought for survival in the Republican period was also suitable for this, Avdagiç said now Turkey wished to have a say in the world. "Minister Albayrak's statements reveal that Turkey has an economic model now that overlaps with its major objectives. The economic administration has hinted that Turkey will walk towards a new horizon as it has overcome all kinds of troubles," he added.

Referring to the successes of Minister Albayrak during his term as the energy minister, Sabancı Holding Chair Güler Sabancı said, "The outlines of what to do during the transition period have been revealed. I believe that we will have more control over the details when the Medium-Term Program is announced in early September." She added, "We fully believe that the plan will be implemented one by one, and that the country will achieve the transformation it deserves." Referring to the new economic approach, Kibar Holding Chairman Ali Kibar said, "We found it successful, and hopefully the market perceives it in this direction, as well. It is not in anyone's favor to take anything differently in the process we are in now."