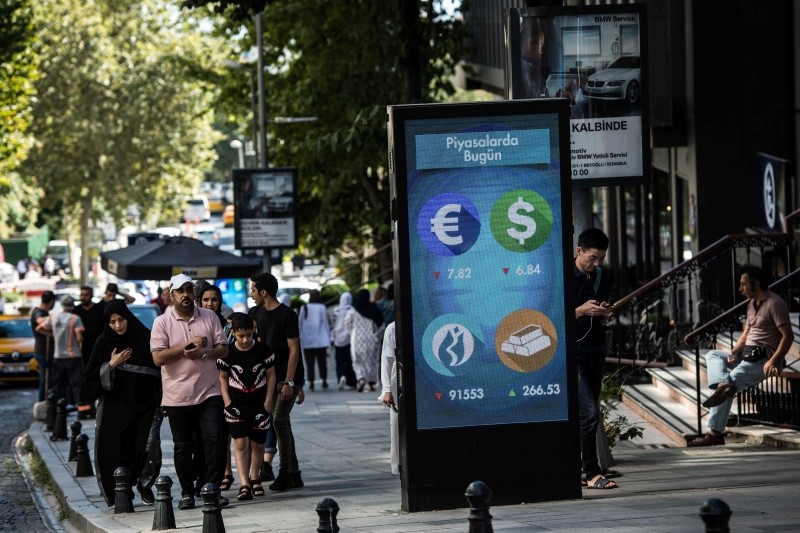 People walk past a digital billboard giving updates on various currencies and the Turkish stock exchange in Istanbul on August 13, 2018. (EPA Photo)
by Daily Sabah with Agencies Aug 14, 2018 12:00 am

Turkey's business lobbies said on Tuesday that tighter monetary policy will stabilize the Turkish lira and that U.S.-Turkish disputes should be solved through diplomacy.

In a joint statement, The Turkish Industrialists and Businessmen Association (TÜSİAD) and the Turkish Union of Chambers and Commodity Exchanges (TOBB) said a concrete roadmap should be prepared to lower inflation permanently.

The statement said that the Turkish economy has strong foundations and that it is important for the real sector to sustain its production and employment rates.

"We have no doubt that Turkish economy will return to a sustainable growth rate by taking necessary precautions," the statement said.

The two institutions suggested a number of moves, including tighter monetary policy to stabilize exchange rates, austerity measures, a roadmap to permanently bring down inflation, strengthening relations with Turkey's most important trade partner the EU, and continuing diplomatic efforts to urgently solve problems with the U.S. under a strategic partnership framework.

The Central Bank of Turkey on Monday introduced measures on the Turkish lira and the foreign exchange market (FX) liquidity management "to support financial stability and sustain the effective functioning of markets."