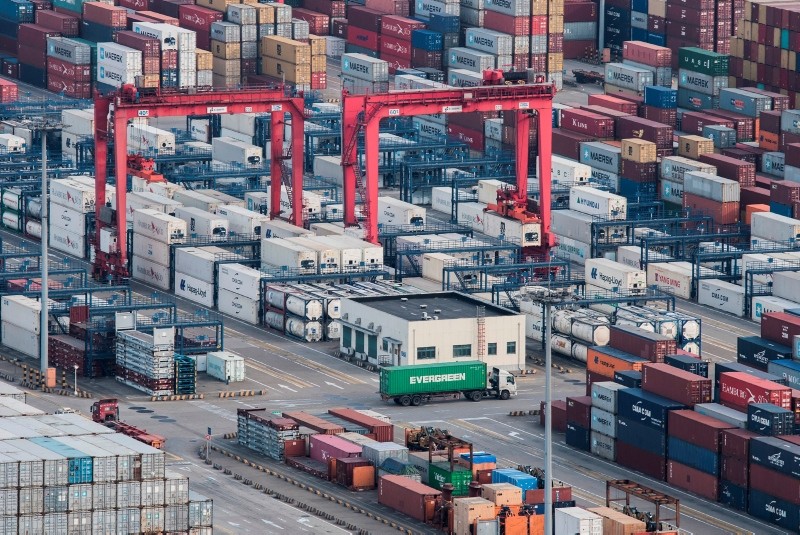 In a retaliatory move against economic attacks spearheaded by the U.S. administration, Turkey has raised import tariffs on a number of goods imported from its NATO ally

Turkey doubled tariffs on several U.S. products, including alcohol and tobacco products and cars, according to a new presidential decree published in the official gazette Wednesday.

Under the decree, Turkey will raise up to 100 percent or more on imports of U.S.-origin products.

"Tax rates on imports of some products have been increased on a reciprocal basis against the U.S. administration's deliberate attacks on our economy," Vice President Fuat Oktay said later on his official Twitter account.

Among the products are cars, rice, some alcohol and tobacco products and some cosmetic products like sun creams.

Accordingly, the import tariffs on alcohol will be 140 percent and 120 percent on automobiles. The tariffs on cosmetic products were increased by 60 percent.

The new decree amends a presidential decree on July 11. Additional tariffs on U.S. products amounted to $533 million, Trade Minister Ruhsar Pekcan said Wednesday. According to Pekcan, tariffs were doubled for 22 products imported from the U.S.

"In the face of unfair actions by the U.S., we will not shy away from protecting the rights of Turkish companies, [and] we will give the necessary response," she said, adding that additional tariffs on Turkish steel and aluminum will negatively affect U.S. exporters.

The U.S. is an important trading partner of Turkey but it is not the only one; our country has several partners and alternative markets, Pekcan said.

President Erdoğan said Tuesday that Turkey will impose a boycott against U.S. electronic products amid an ongoing and deepening rift between the two NATO allies over a number of issues.

"If they have the iPhone, there is Samsung on the other side. We have Venus in our own country, Vestel. We will implement these," he said.

On Friday, U.S. President Trump said the he decided to impose a 50 percent ad valorem tariff on steel articles and 20 percent on aluminum imported from Turkey, specifically targeting the slide in the Turkish lira and the economy as he wrote on his Twitter account.

Following Trump's announcement, Turkey's Foreign Ministry said Turkey would retaliate against the raising of steel and aluminum tariffs by the U.S. administration.

Turkey's steel exports were valued at $11.5 billion last year, accounting for 7.3 percent of its total exports worth $157 billion, according to the Turkish Steel Exporters Association. The U.S. was the top destination for Turkish steel exports in 2017, which were worth $1.1 billion. Turkey came in sixth place among the countries the U.S. imported steel from last year, while Turkish steel's share was 7 percent of total U.S. steel imports.

Presidential Spokesman İbrahim Kalın highlighted Wednesday that Turkey favors a multilateral and free economic system in cooperation with eurozone countries and its neighbors as opposed to the protectionist approach of the U.S. administration. Kalın also stressed that the efforts and collaborative negotiations to preserve a liberal economic system will continue uninterruptedly.

Citing Wednesday's tariff hikes on imports of American goods, the spokesman said, "Turkey does not intend to engage in a trade war, but when it is under an economic siege, the country will take all necessary steps to repel those attacks in coordination with all relevant institutions, state bodies and business associations."

"Turkey will continue implement its economic policies to protects its integration with the global economy," Kalın added.

He also reiterated that the Turkish economy has strong fundamentals and the recent volatility in the exchange rate does not reflect the economic structure of the country, but emanates from an economic war waged on Turkey with illegitimate and irrational moves targeting the country's economy.

Kalın underscored that the U.S. administration regularly creates crises in its ties with other countries to manipulate the problems in domestic politics.

The U.S. administration's policy does not only target the countries' economies but also the global economic equilibrium, harming its own interests, Kalın said.

Turkey and the U.S. have been locked in a heated crisis emanating from unjust sanctions and the actions of Trump, as Washington levied sanctions on Interior Minister Süleyman Soylu and Justice Minister Abdulhamit Gül for not releasing American pastor Andrew Brunson, who faces terrorism charges in Turkey.

Serving at the Diriliş (Resurrection) Protestant Church in the western province of İzmir, Brunson was arrested in October 2016 and moved to house arrest on July 25 due to health problems. He is scheduled to appear before a court in October for his third hearing after the court rejected an appeal for his release in a July 18 hearing.