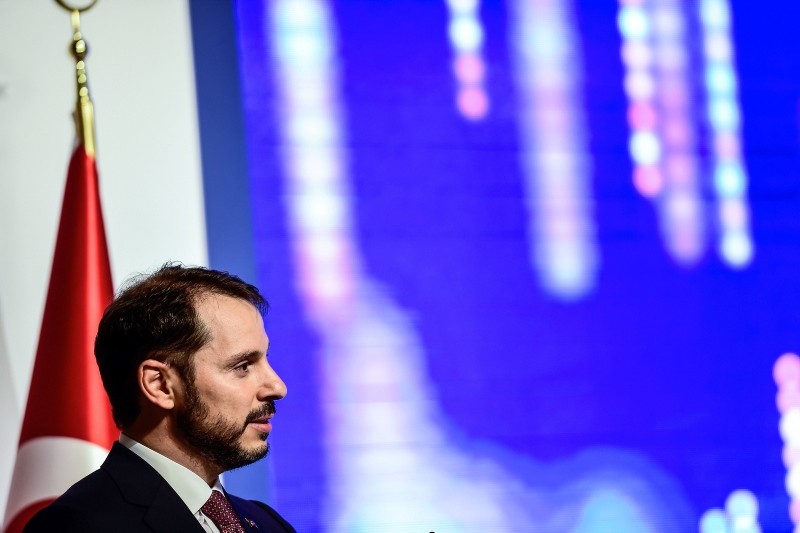 Treasury and Finance Minister Berat Albayrak said on Thursday that Turkey will come out of the current currency crisis and volatility stronger, adding that the Turkish banking sector is healthy and strong.

In a conference call with nearly 6,000 foreign investors, he stressed that the government will "not compromise on fiscal discipline."

According to Albayrak, the cabinet will not hesitate to provide support to the banking sector, which is capable of managing current volatility, and there has not been a major deposit flow from banks lately.

Albayrak said Turkey had already taken measures to curb FX funding, and corporations are in a comfortable position to meet short-term liabilities as no capital controls are on the agenda.

Turkey has no plans to seek financial assistance from the International Monetary Fund (IMF), and instead will focus on attracting foreign direct investment, the minister said, adding that the government will reach its fiscal discipline goals by making certain expenditure cuts.

He also said the government expected a more modest growth from the Turkish economy, which expanded 7.4 percent in 2017.

Commenting on an unprecedented U.S. move to impose sanctions against a NATO ally, Albayrak said Turkey will navigate through this period with other parties, including Germany and China. Highlighting the need to coordinate, he reminded that "lots of different countries" also faced U.S. sanctions.

"We want to reduce inflation to single digits as soon as possible," he said.

Presidential Spokesman Ibrahim Kalın on Thursday praised the measures taken by the Turkish government and Central Bank over the last two days that have brought about a "speedy recovery process" in the economy.

"Ankara closed channels related to the perception operation attempting to provoke speculations on the Turkish lira.

It is crucial that two strong eurozone actors like Germany and France express their intention to take action," Kalın added, referring to U.S. attacks on the Turkish economy which have drawn alarm and condemnation from Turkey's European allies.

Turkey and the U.S. have been locked in a heated crisis emanating from unjust sanctions and the actions of U.S. President Donald Trump, as Washington levied sanctions on Interior Minister Süleyman Soylu and Justice Minister Abdulhamit Gül for not releasing American pastor Andrew Brunson, who faces terrorism charges in Turkey.