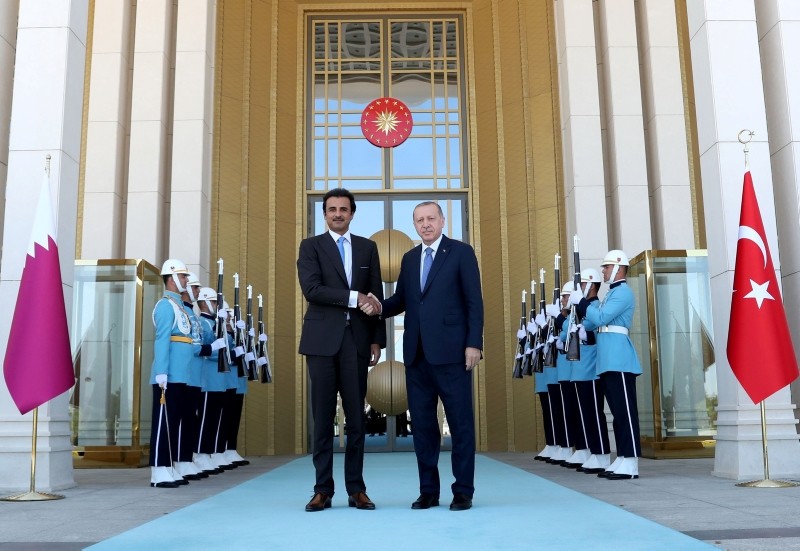 Turkey's President Recep Tayyip Erdogan (R) and the Emir of Qatar Sheikh Tamim bin Hamad Al-Thani shaking hands prior to their talks in Ankara.
by Daily Sabah with Reuters Aug 20, 2018 12:00 am

The agreement, which was signed by the heads of the two central banks on Friday, will establish a two-way currency exchange line, the Qatar Central Bank said in a statement posted on its website.

The deal will facilitate trade between the two allies as the Turkish currency is battered by a deepening spat with Washington, the Central Bank of the Republic of Turkey (CBRT) said Monday.

"The swap agreement has been signed over Turkish lira and Qatari Riyal and concluded with an overall limit of $3 billion," the CBRT said.

"Core objective of the agreement is to facilitate bilateral trade in respective local currencies and support financial stability of the two countries."

Qatar's Emir Sheikh Tamim bin Hamad Al-Thani visited Ankara Wednesday in an apparent show of support for Turkey, pledging $15 billion in direct investments in the country that found itself embroiled in a crisis with the U.S.

The Qatari government has denied the accusation, blasting the blockade as unjustified and a violation of international law. Amid the rift, Turkey has provided an increased support to Qatar, boosting food and other exports to meet any shortages.

Turkey also maintains a military base in Qatar. The two countries inked a military cooperation deal in October 2014, allowing for joint training exercises, cooperation on defense manufacture and the deployment of Turkish forces on Qatari territory.

The first batch of Turkish troops arrived in capital Doha on Oct. 4, 2015, and the Turkish flag was hoisted at the military base four days later.