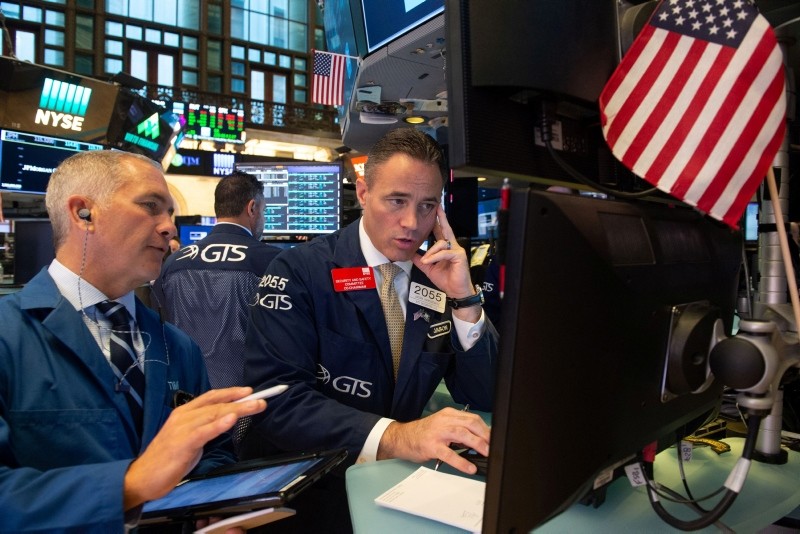 The S&P 500 and Dow Industrials moved lower on Thursday as trade-sensitive stocks were hit by a fresh round of tariffs in the ongoing trade dispute between the United States and China.

Despite ongoing talks, the two countries imposed tariffs on $16 billion worth of each other's goods.

The Nasdaq, however, edged upward as technology stocks posted gains. Within the S&P 500, the technology sector was the biggest gainer, rising 0.5 percent.

"The two issues hitting the market today are the China tariffs issue and a mild reaction to the Trump issue," said Jim Awad, senior managing director at Hartland & Co in New York. "For now, they're causing a mild headache, but it's not a migraine."

The energy index fell 0.6 percent and the materials index declined 0.7 percent, the biggest percentage drops among the S&P's major sectors, as prices of crude oil and metals declined due to trade war worries.

Data from the U.S. Labor Department indicated the labor market was holding firm despite trade tensions as jobless claims fell for the third straight week.

Investors said they were keeping a close eye on the meeting of U.S. central bankers in Jackson Hole, Wyoming, where Federal Reserve Chair Jerome Powell will speak on Friday. His speech will be watched for clues on monetary policy after minutes from the most recent meeting indicated that the Fed would raise interest rates soon.

Shares of U.S. meat producers Hormel Foods Corp and Sanderson Farms Inc fell after both companies attributed their underwhelming quarterly results to Chinese tariffs, which they said have led to domestic oversupply and lower prices. Hormel shares were last down 3.1 percent, and Sanderson Farms share were last trading 1.9 percent lower.

Declining issues outnumbered advancing ones on the NYSE by a 1.93-to-1 ratio; on Nasdaq, a 1.33-to-1 ratio favored decliners.