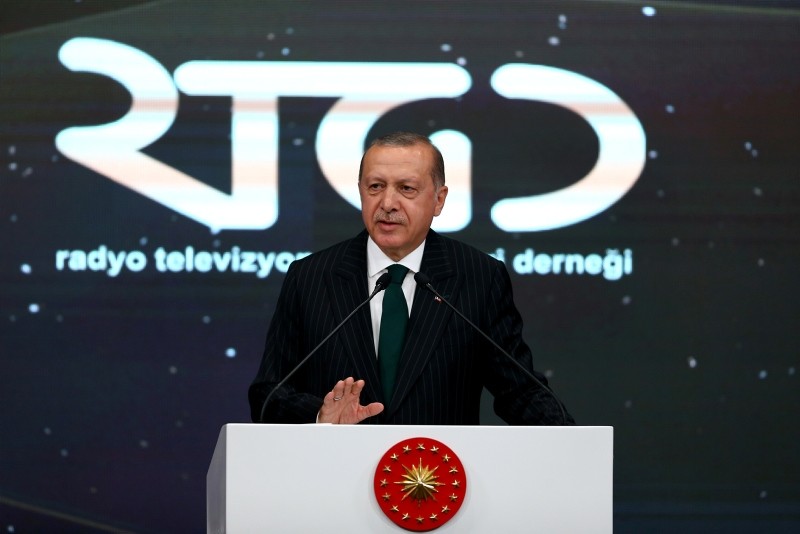 President Recep Tayyip Erdoğan said Wednesday that Turkey will overcome the economic hardships it is currently facing due to external economic pressure amid a diplomatic row with the United States.

Speaking at the Media Oscars award ceremony held by the Broadcast Journalists Association, Erdoğan said: "It is obvious that there are structural economic problems that need to be resolved. We are already aware of them and working on the solution. Our infrastructure is strong enough to overcome these problems."

The row between Turkey and the U.S. escalated when U.S. President Donald Trump decided to impose sanctions on Turkish ministers Süleyman Soylu and Abdülhamit Gül on Aug. 1 and also increase tariffs on imported steel from Turkey by 50 percent and aluminum by 20 percent, while threatening more sanctions over the detention of terror-linked evangelical pastor Andrew Brunson.

The pastor is under house arrest in Turkey on charges of links to the Gülenist Terror Group (FETÖ) and the PKK, a U.S.-designated armed terrorist organization. In retaliation, Turkey increased the tariffs on certain U.S. goods up to 100 percent and higher.

The Turkish lira has been losing its value against the U.S. dollar over the past several weeks after the U.S. decision to impose tariffs.

The Turkish president said that the structural problems alone could not be enough reason for the current problems in the country's economy, stating: "Some people do not shy away from admitting that they are trying to corner Turkey."

Erdoğan assured that necessary measures have been taken and allies are also supporting Turkey financially, reiterating that Ankara will not bow to Washington's threats.

Turkey garnered extensive support from European partners such as France and Germany, as well as Russia, China, Kuwait and Qatar who raised their voices to highlight the significance of the Turkish economy, amid attacks from the threatening economic showdown initiated by Trump.