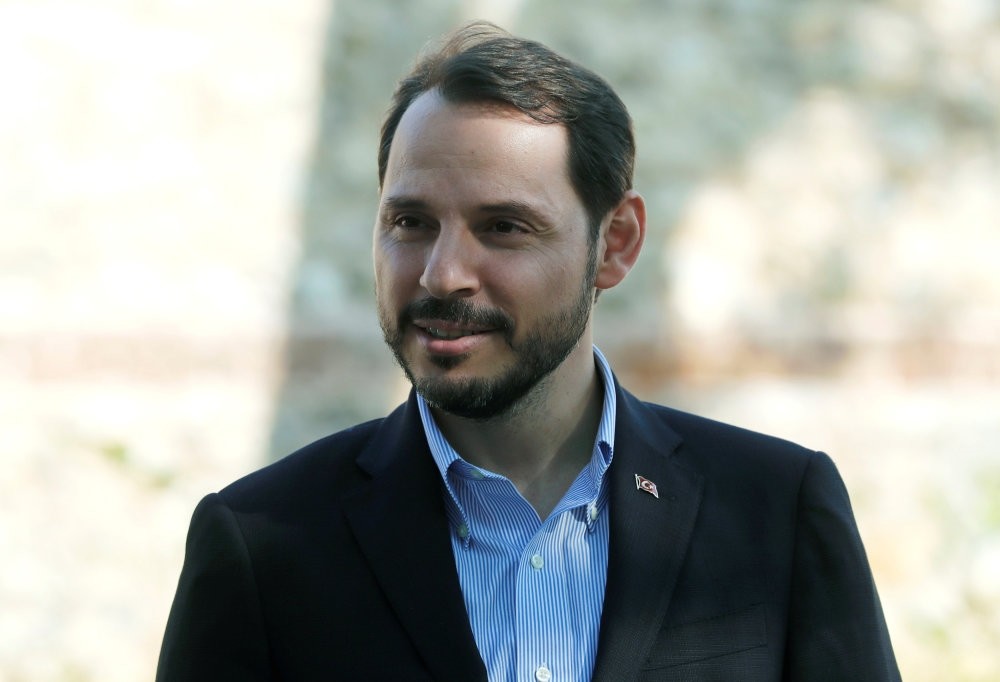 Treasury and Finance Minister Berat Albayrak is pictured before an interview with Reuters in Istanbul, Turkey, Sept. 2, 2018.
by Daily Sabah with Wires Sep 04, 2018 12:00 am

Treasury and Finance Minister Albayrak said the central bank will take all required measures in pursuit of the price stability objective, while he also remarked that steps to be taken thanks to the coordination of fiscal and monetary policy will support healthy price formation

In a bid to curb inflation, Turkey's central bank will make each necessary move, Finance Minister Berat Albayrak said, indicating that all the parameters affecting the inflation outlook will be assessed and measures required within the monetary policy framework will be taken. Albayrak, who met with Britain's Finance Minister Philip Hammond and Minister of State for Europe and the Americas Alan Duncan in London yesterday, also stressed that Turkey has no plans to seek financial assistance from the International Monetary Fund (IMF) and that it focuses on attracting foreign investors, adding that the government does not expect any fines regarding the ongoing Halkbank case in the U.S.

In an interview with Reuters Istanbul, Albayrak said he did not expect any problems in the banking sector. "I have no reason to be worried at this stage. But we are aware how important the banking sector is. We are in a close coordination and cooperation with our banks and the [banking watchdog] BDDK."

"We are not expecting any problems in the banking sector, but in case of a problem, we will support them in every way,"

He also dismissed concerns about debt, including in the private sector. He said the current account deficit will be "considerably below" forecasts by year-end and "much stronger" in 2019.

Turkey's main borrowing and resource market will continue to be Europe and the United States, the minister said, adding that that this year's export will be implemented in the Chinese market under the scope of diversification, noting that Turkey does not have a plan to apply to the IMF and focuses on attracting foreign direct investment.

"While our economy experienced a strong growth of 7.4 percent in the first quarter of the year, there was a slowdown in economic activity together with the second quarter of the year. This slowdown actually marks the beginning of the stabilization process of the economy. The slowdown in domestic demand lowers demand for imports," he noted.

Albayrak pointed out that tourism revenues also increased rapidly with the third quarter of the year. "For the rest of the year, we expect for the net external demand to make a positive contribution to the growth based on imports decreasing with the favorable outlook in the exports and tourism revenues and the decline in domestic demand."

He said they expect the ratio of current account deficit to gross domestic product to remain below 5 percent by the end of the year, adding the ratio of public net debt stock to the national income rate is 28 percent, while it stands at 49 percent in emerging economies with an OECD (Organization for Economic Co-operation and Development) average of 111 percent.

On a question on whether a capital increase will come to the agenda in public banks after the rise in the dollar/lira exchange rate, Albayrak said the recently increasing exchange rate movement has been carefully monitored by the related institutions and necessary measures are being taken in this regard, highlighting that the risks that may arise and the precautions to be taken are being widely evaluated by relevant institutions.

"In the upcoming period, the steps to be taken thanks to the coordination of fiscal and monetary policy will support healthy price formation and the volatility in the markets will decline to normal levels. However, if there is a need for a capital increase in public banks, of course, we will do whatever is necessary within the market conditions," Minister Albayrak said.

He remarked that the real sector has a foreign currency position surplus in the short run and that they carefully monitor the balance sheet effects that can arise from the exchange rate channel. "Steps are taken on the companies' access to credit and applications on loan structuring as needed. All the necessary steps will continue to be taken with determination," he added.

"The central bank in Turkey has been maybe more independent than those in other countries," Albayrak continued. The bank will take steps "to continue this independence." Turkey has reached a point where it requires a "full-fledged fight against inflation," Albayrak said.

The Central Bank of the Republic of Turkey (CBRT) yesterday announced that the bank will continue to use all available instruments in pursuit of the price stability objective. The announcement came following the release of the inflation report for August by the Turkish Statistical Institute (TurkStat). According to TurkStat, consumer prices in Turkey rose 17.90 percent on a yearly basis last month while annual inflation was at 15.85 percent in July.

"Recent developments regarding the inflation outlook indicate significant risks to price stability," the CBRT said, adding: "Accordingly, in line with the previous communication, monetary stance will be adjusted at the September Monetary Policy Committee Meeting in view of the latest developments."

The treasury and finance minister said that the bank, at its last meeting, would look at the markets and at price stability and "would not hesitate to take the necessary steps", in coordination with government fiscal policy. Albayrak also said that, since President Recep Tayyip Erdoğan's re-election, monetary and fiscal policy were closely aligned strengthening the bank's hand.

Minister Albayrak was visiting London yesterday for talks with Britain's Finance Minister Philip Hammond. He was in Paris last week and will go to Germany next week.

Elaborating on his meeting with Finance Minister Hammond and the Minister of State for Europe and Americas Duncan, Albayrak said, "We would once again emphasize our commitment to accelerate the link between the two countries."

He noted that the support France and Germany showed for Turkey in the recent period amid a political row between Ankara and Washington could conduce to a new era in the relations with the European Union (EU).

When asked about Turkey's gains from meetings with other European countries, Albayrak said visits to France and Germany "could conduce toward opening of a new era" in the Turkey-EU relations, which have been losing momentum for nearly two years. "In this sense, updating the customs union as a concrete step is on our agenda," he said, adding that the current customs union, which involves merchandise trade, is foreseen to be extended to services, agriculture and public services.

He also noted that U.S. President Donald Trump's stance on the global economy has brought Turkey and EU closer to each other. "Strategically... politics, trade, security and energy, there is no doubt that the two sides are complementary to each other."

Albayrak said they will make an effort to expand the customs union and that this would bring the economic integration between Turkey and EU to "the next level," adding, "Such a step, also, would be a very good answer to the protectionist policies introduced by the U.S. administration."

Turkey and the U.S. have been locked in a heated crisis emanating from unjust sanctions and the actions of Trump, as Washington levied sanctions on Interior Minister Süleyman Soylu and Justice Minister Abdulhamit Gül and increased tariffs on imported steel from Turkey by 50 percent and aluminum by 20 percent, respectively, while threatening the country with more sanctions over pastor Andrew Brunson.

Responding to a question related to the Halkbank case in the U.S., the minister emphasized that Turkey hired a U.S. law firm to look into state-owned Halkbank's dealings with Iran and that it found that the bank did not violate U.S. sanctions, adding that Ankara does not expect the bank to face any fine.

"As a result of a months-long independent examination, it has been established that the bank had not violated primary and secondary U.S. sanctions against Iran," he said.

"We do not expect a fine on Halkbank," he added, predicting that the bank would emerge "completely clean" from the process. "Anything otherwise would be a completely political decision."

Referring to Turkey's wider standoff with the United States, Albayrak said Washington had taken it to a point that did not benefit "the U.S. state or people."

Deputy CEO of Halkbank Mehmet Hakan Atilla, who was arrested in the U.S. in March 2017 two and half months after the arrest of Brunson in Turkey, was tried and convicted on five charges, including violating controversial U.S. sanctions on Iran, crimes to deceive the U.S. and defrauding U.S. banks, while they acquitted him on a single account of money laundering.