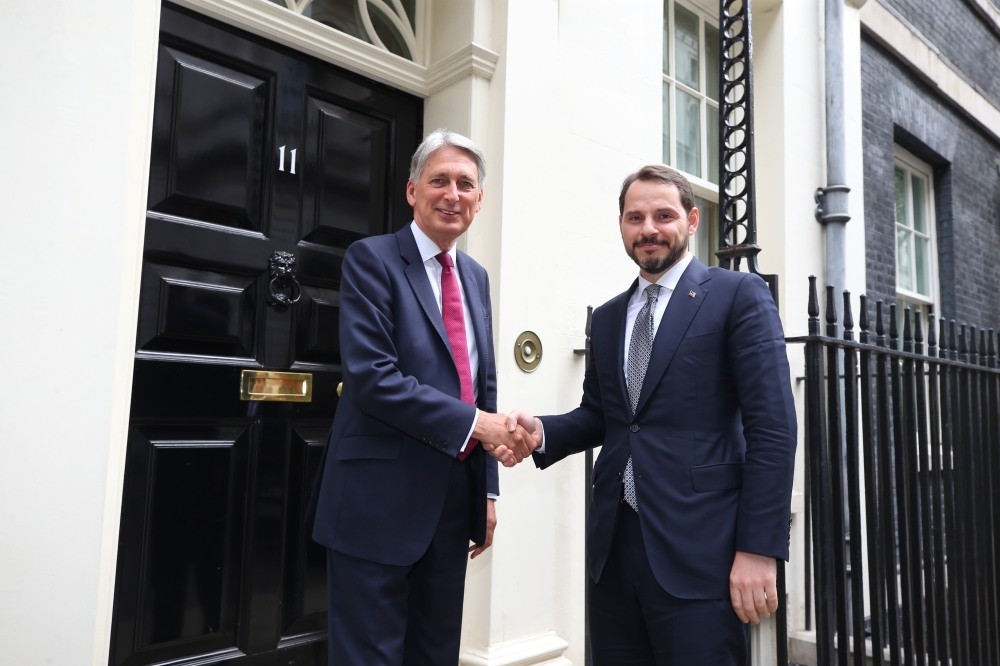 Treasury and Finance Minister Berat Albayrak and his British conterpart Philip Hammond (L) shake hands ahead of their meeting in London, Sept. 3.
by Daily Sabah Sep 05, 2018 12:00 am

Amid a busy agenda, Treasury and Finance Minister Berat Albayrak, in London, met with directors and representatives of 11 financial institutions which manage assets of $15 trillion

Treasury and Finance Minister Berat Albayrak has had a busy agenda recently, including a recent meeting with representatives of financial institutions that manage assets worth $15 trillion in London. After his meeting with Britain's Chancellor of the Exchequer Philip Hammond and State Minister Alan Duncan on Monday, he met with directors and representatives of 11 financial institutions. Albayrak narrated Turkey's 15-year success story and future policies that will be implemented within the frame of a stronger strategy. Elaborating on his meeting with the two ministers, Albayrak said on his social media account that in addition to discussing "our bilateral cooperation, we discussed the steps that could be taken to increase our trade volume after Brexit."

The meetings attended by Albayrak, who has had a busy schedule for the past month during which he carried out meetings with his counterparts from Germany and France, came amid escalating tensions between Ankara and Washington.

Ahead of his meeting with Hammond and Duncan, Albayrak told Reuters late Sunday that the support France and Germany showed for Turkey in the recent period amid a political row between Ankara and Washington could lead to a new era in the relations with the European Union.

Albayrak was in Paris last week to meet French Minister Bruno La Maire. In a joint press conference after the meeting, the two ministers stressed the importance of Turkey's stability, as the two countries decided to act jointly against the latest unilateral actions by the U.S.

Albayrak and his German counterpart Olaf Scholz discussed recent developments in the Turkish economy in a phone call last month. The minister is expected to depart for Germany next week to meet his counterpart.

He is also expected to hold a meeting soon with Germany Economy and Energy Minister Peter Altmaier. The information came following Erdoğan's call with German Chancellor Angela Merkel last month. The two leaders agreed to arrange a meeting between Albayrak and Altmaier.

Altmaier is scheduled to visit Turkey on Oct. 25-26 to boost bilateral economic ties, accompanied by an 80-member business delegation of leading companies.

The political tension between Ankara and Washington sparked worry in markets in August after U.S. President Donald Trump threatened to use economic pressure over the legal case of American pastor Andrew Brunson, who is under house arrest in Turkey because of his alleged ties with the Gülenist Terror Group (FETÖ) and the PKK, a U.S.-designated armed terrorist organization.

The Turkish lira has depreciated some 40 percent against the U.S. dollar since the beginning of the year with most of the loss happening in August, which witnessed the escalation of the diplomatic crisis between Ankara and Washington.

Meanwhile, European leaders raised their voices to highlight the significance of the Turkish economy that has recently come under attack with the threatening economic showdown initiated by Trump.

The country has garnered extensive support from European partners such as France and Germany as well as Russia, China, Kuwait and Qatar against the unfriendly moves of the U.S. administration.

Qatar's Emir Sheikh Tamim bin Hamad Al Thani visited Ankara last month in an apparent show of support for Turkey, pledging $15 billion in direct investments in the country that found itself embroiled in a crisis with the U.S.

Both French President Emmanuel Macron and German Chancellor Merkel highlighted the importance of the Turkish economy and maintaining strong ties with Turkey in a phone call with Erdoğan last month. Erdoğan and Merkel reportedly asserted their commitment to strengthening Turkish-German cooperation with more high-level talks and visits.

Meanwhile, Albayrak held a teleconference last month with around 6,100 international investors and said the government aimed at making Turkey an investment center in the region.

In his recent address to foreign investors from around the world, Albayrak outlined the detailed road map Turkey will follow in the upcoming period and highlighted the Turkish economic management's determination to continue fiscal discipline.

He underscored Turkey's intention to decrease inflation to single digits and maintaining fiscal discipline while continuing to invest in infrastructure projects for long-term growth. He also said there will be close monitoring of market expectations.