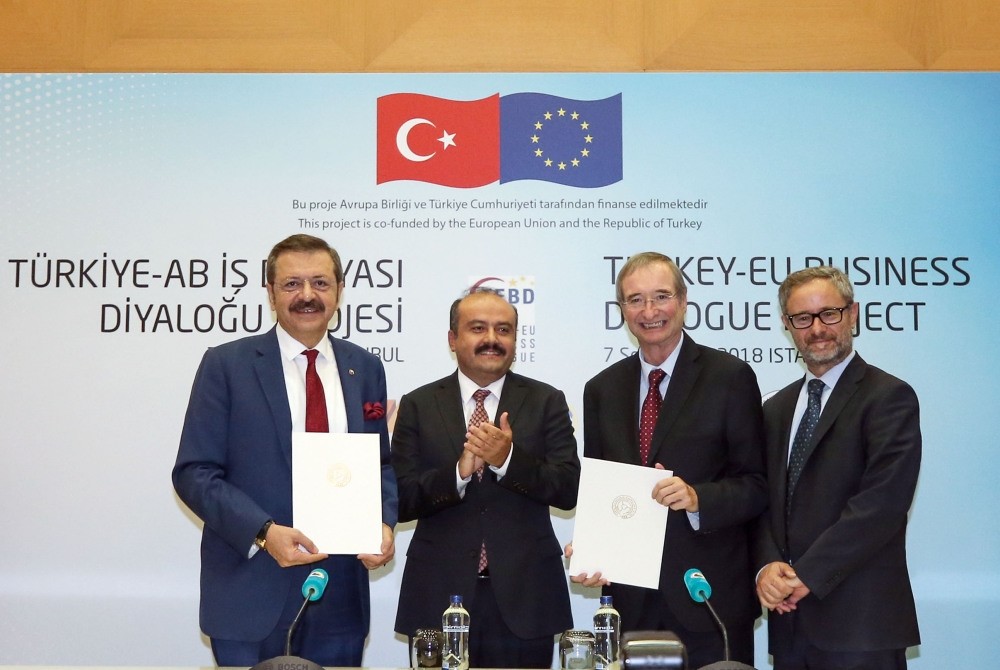 The Turkey-EU Business Dialogue (TEBD) project to promote integration of European Union and Turkish business communities and ensure greater awareness of business opportunities between Turkey and the EU was launched in Istanbul Friday. The new program was launched by the Union of Chambers and Commodity Exchanges of Turkey (TOBB) and the Association of European Chambers of Commerce and Industry (EUROCHAMBRES). Speaking at the ceremony, EUROCHAMBRES President Christoph Leitl (L) said considering today's complex relationship between the EU and Turkey, this new initiative is more necessary than ever.

"At a time when political dialogue is difficult, economic dialogue and cooperation can be the bridge that connects EU and Turkey. This is the importance of our new project, the TEBD," Leitl said.

TOBB Chairman and EUROCHAMBRES Vice President Rifat Hisarcıklıoğlu said: "This new program illustrates our shared ambition to strengthen EU-Turkey business relations in a practical manner. We want to focus on economic development and cooperation for the benefit of our Turkish and EU business members."

"This project is also an attempt to revive EU-Turkey relations that have been in decline in recent years," Hisarcıklıoğlu said.

Recalling that the EU has provided some 11.5 million euros in grants to TOBB, chambers and stock exchanges during the process, Hisarcıklıoğlu noted that EUROCHAMBRES helped TOBB bring the experience of the leading chamber systems of EU member countries to Turkey, as well as its own knowledge and experiences.

Indicating that the process started with the Chamber Development Projects in 2001, Hisarcıklıoğlu said that they have continued to support chambers and commodity exchanges under projects known as the Turkey-EU Chamber Forum and now Turkey-EU Business Dialogue.

According to Hisarcıklıoğlu, these projects support the service capacity of chambers and stock exchanges and contribute to Turkey's EU accession process and enable the business world to know each other better.

"We include our chambers and commodity exchanges in dialogue platforms between Turkey and the EU. To put it clearly, the most effective and increasingly stronger platform for dialogue between Turkey and the EU is being carried out by the business community under the leadership of our chambers and commodity exchanges. We know that we need further dialogue. That is why we see this project as a crucial step to bring closer the real players of Turkey-EU integration," Hisarcıklıoğlu said.

The objective of the TEBD program is to strengthen mutual understanding and cooperation between the Turkish and the European private sectors. During the next 30 months, European and Turkish Chambers of Commerce and Industry will engage in over 100 activities, including Chamber twinnings, capacity building, company surveys, and more, the statement by the EUROCHAMBRES read.

"In other words, Turkish and EU chambers will partner up with each other. There is a range of cooperation areas such as women and young entrepreneurship development, environment, product development and Customs Union. In this context, we plan to hold over 100 events from September 2018 to June 2020. Turkish chambers and commodity exchanges will develop and implement joint projects in these areas with their EU partners."

Underscoring that all of this will bring momentum to local development in Turkish provinces and districts and enable local entrepreneurs to open up to Europe, Hisarcıklıoğlu said: "As a result, both Turkey and Europe will win, and we will work together and win together. We believe that this win-win process, which we have started as the business community, will be reflected on countries as well. I hope this project contributes to our business world, the service capacity of our chambers and commodity exchanges and Turkey-EU dialogue."

EUROCHAMBRES President Leitl said that they believe in Turkish chambers, commodity exchanges and the Turkish economy, adding that despite hard times in the economy, what matters is to work to restore things. "We believe in the Turkish government about this," he said.

Leitl indicated that 20,000 European companies trust the Turkish business environment and invest in the country, stressing that it is possible to overcome these hard times through corporate cooperation. "In particular, the Central Bank of the Republic of Turkey (CBRT) and the European Central Bank (ECB) can cooperate. This can be accompanied by chambers and commodity exchanges. As EUROCHAMBRES, we will accompany you to overcome this challenging period. The solution of the questions depends on working together," he underlined.

Pointing out that 46 countries in Europe are members of EUROCHAMBRES, Leitl said that they are pioneering all member state governments regarding innovation.

He added that political developments should not be allowed to impact the business world, companies and work, adding that they listen to companies and support them. He called on governments to support companies, saying, "Our main job is to say 'business comes before politics.' Europe has been combined thanks to such ideas."

Highlighting that Turkey's biggest treasure is its large pool of skilled human resources, Leitl noted that this resource could create larger value added with education.

Deputy Trade Minister Fatih Metin indicated that there is a need for dialogue between Turkey and the EU, explaining that chambers and commodity exchanges conducting commercial diplomacy are of great importance for the economy.

Stressing that commercial cooperation and relevant diversity between Turkey and the EU must be prioritized, Metin noted that EU countries constitute half of Turkey's foreign trade. He also pointed to the long-lasting structure of Turkey-EU partnership.

EU Delegation Vice Chairman Gabriel Munuera Vinals indicated that dialogue meetings, in which the European Commission and the Turkish government focus on global partnership, strengthening both partners. Chairpersons of Turkish chambers and commodity exchanges also attended the meeting, among with chairpersons and representatives of chamber unions from Bosnia and Herzegovina, Macedonia, Serbia, the Russian Federation, Montenegro, Kosovo, Belarus and Georgia.

Turkey is the fourth-largest export market for the European Union and fifth-largest provider of imports. The EU is by far Turkey's number one import and export partner. Turkey's imports from the EU are dominated by machinery and transport materials, chemical products and manufactured goods, while the country mainly imports machinery and transport equipment, followed by manufactured goods.

Last year, Turkey's exports to the EU were 69.8 billion euros, while imports from the union stood at 84.5 billion euros.