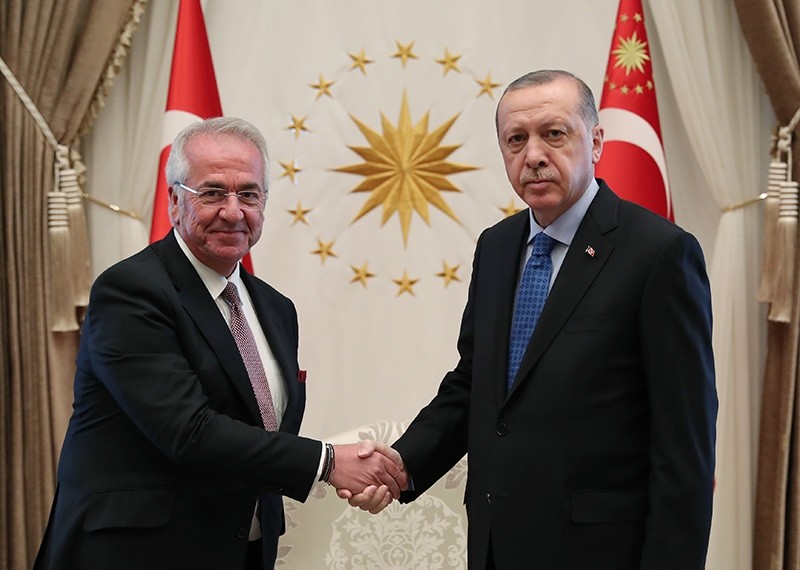 President Recep Tayyip Erdou011fan meets with a Tu00dcSu0130AD delegation headed by Chairman of the Board of Directors Erol Bilecik. (AA Photo)
by Daily Sabah Sep 13, 2018 12:00 am

President Recep Tayyip Erdoğan on Thursday hosted a delegation from the Turkish Industry and Business Association (TÜSİAD) at the presidential complex in Ankara to discuss current issues in the Turkish economy.

"Turkey's economy has the strength to overcome any challenge. We are ready to cooperate to take the necessary steps as the business world," TÜSİAD said on Twitter after the meeting with Erdoğan.

Earlier on Thursday, Erdoğan said that his sensitivity regarding high interest rates remains the same but the Central Bank is independent in its decisions. Speaking at the general assembly of the Confederation of Turkish Tradesman and Craftsman (TESK) in Ankara, he reiterated his view that high interest rates harm business owners, fuel higher inflation and hamper growth.

"TÜSİAD is saying, the interest rates are too high," Erdoğan said. "I'm also telling them let's bring down the high interest rates."

Following the CBRT's announcement, the Turkish lira strengthened to 6.0151 against the U.S. dollar from a 6.45 level, gaining nearly 5 percent. The currency rate later stabilized around 6.20 with lira's gains at some 2.2 percent.

The committee said that a "more significant rebalancing trend" was observed in Turkey's economic activity and that external demand "remained strong" with an accelerated slowdown in domestic demand.