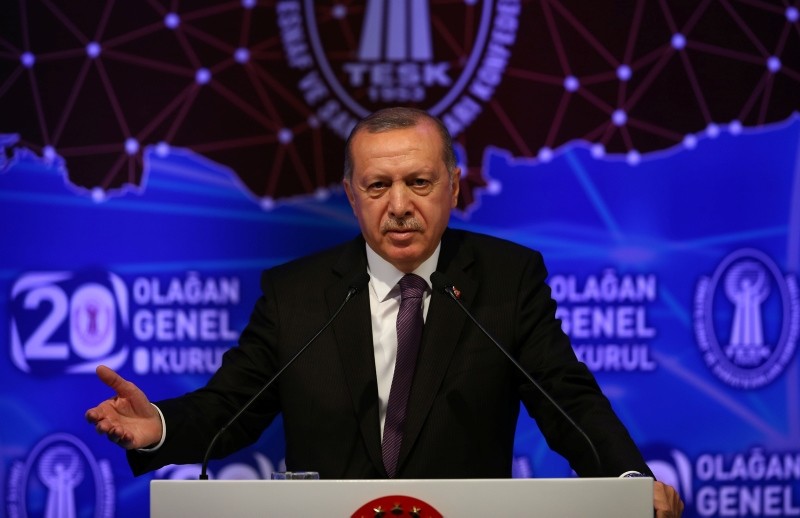 President Recep Tayyip Erdoğan said Thursday that his sensitivity regarding high interest rates remains the same but the Central Bank is independent in its decisions.

Erdoğan's remarks came some 1.5 hours before the the Central of the Republic of Turkey (CBRT)'s widely-expected announcement on interest rates after its Monetary Policy Committee (MPC) meeting. The CBRT is expected to increase interest rates to curb inflation and stabilize the Turkish lira.

Speaking at the general assembly of the Confederation of Turkish Tradesman and Craftsman (TESK) in Ankara, Erdoğan reiterated his view that high interest rates harm business owners, fuel higher inflation and hamper growth.

"My sensitivity regarding interest remains the same. Nothing has changed. The Central Bank is independent, it takes its own decisions. But there are also private banks, they are acting according to what? They act according to the Central Bank's decisions and there are currently rates as high as 50 percent in practice," Erdoğan said, underlining that such sharp profits could only be gained through narcotics.

"The truth is clear as day; we can never be intermediators for these instruments for exploitation called interest," he added.

The president once again said that interest rates are the cause and inflation is the result.

"You [the CBRT] determine the interest rates but inflation occurs by itself through the flow. The CBRT announces its year-end inflation rates but I had not seen them actually reach them until today. They misestimate it and revise their rates again," Erdoğan said and linked high inflation to these "wrong steps."

Later in the day, the CBRT sharply hiked its benchmark one-week repo interest rate by 625 basis points from 17.75 percent to 24 percent, higher than the average market expectation of 400 to 500 basis points.

Evaluating the current economic situation, Erdoğan said what Turkey experiences today is not a crisis but a foreign-sourced manipulation and the Turkish economy will overcome this through savings, efficiency, and a determined legal approach on market manipulation.

"Turkey's biggest advantage is that these problems do not come from the finance sector. Our banks are standing solid on their feet," Erdoğan said, adding that once currency, interest and inflation fluctuation is stabilized, the finance sector will take bolder steps.