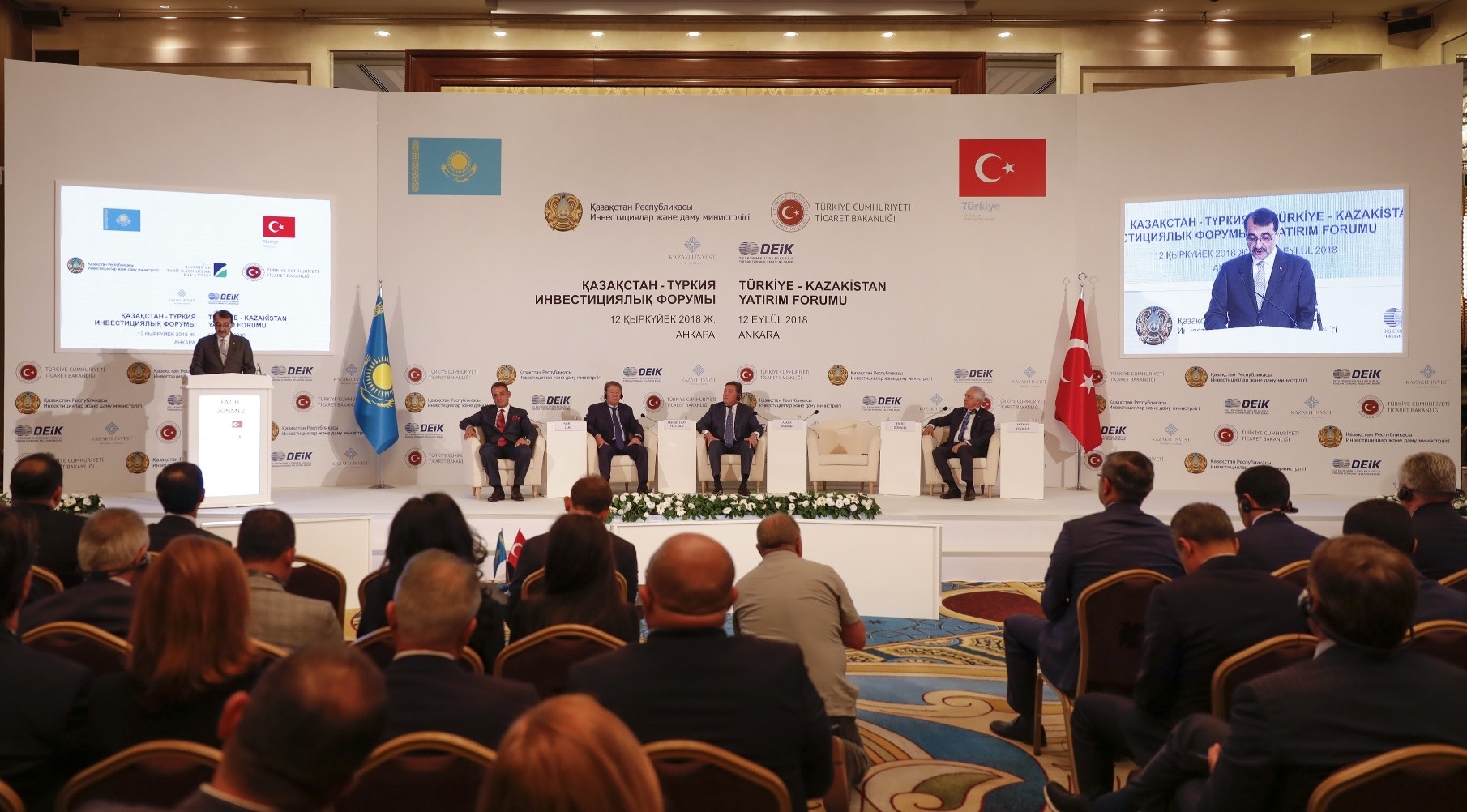 The Turkey-Kazakhstan investment forum yesterday witnessed the signing of 22 agreements worth $1.7 billion aiming to boost cooperation between the two countries ahead of Kazakh President Nursultan Nazarbayev's visit to Turkey

The forum came ahead of an official visit by Kazakh President Nursultan Nazarbayev, who is to arrive in Turkey today, according to presidential sources.

Nazarbayev will meet President Recep Tayyip Erdoğan and hold talks with Turkish businessmen, according to a written statement by the Kazakh presidency yesterday. Nazarbayev will also participate in the 3rd High Level Strategic Cooperation Council meeting between Turkey and Kazakhstan, the statement added.

Speaking at the investment forum, Energy and Natural Resources Minister Dönmez said they intend to increase the trade volume between Turkey and Kazakhstan to $5 billion in a few years and then to $10 billion.

"We are obliged to move our existing cooperation further to reach these levels within a maximum of seven to eight years," he noted. President Erdoğan's visit to the most developed former Soviet state in Central Asia in September of last year marked a decisive shift toward building stronger economic and commercial ties as investment agreements worth $590 million were inked between companies from the two countries and emphasized the institutional character of bilateral ties.

Dönmez expressed that they are pleased to meet the businesspeople of Kazakhstan, a friendly and allied country with deep historical and cultural ties, at the Turkey-Kazakhstan Investment Forum.

Speaking prior to the forum, Kazakhstan's Investment and Development Minister Kassymbek said Turkey is one of the top 10 investors for Kazakhstan, adding that more than 22 documents are being signed.

Turkey's energy minister stated that even though the trade volume, which entered a downward trend in 2013 and afterward, showed an increase of 23 percent in 2017, it is well below its potential. He recalled that in 2017, the two countries reached a trade volume of $2.4 billion, while he also pointed to an increase in the first seven months of 2018 compared to the same period last year.

"However, although the two communities act so closely and friendly, we have not yet sufficiently reflected this close relationship in economic relations. We are obliged to move our existing cooperation further," Dönmez said. "Both in these types of business forums and in economic cooperation agencies that our countries are members [of] we must meet more frequently to better evaluate existing opportunities."

Dönmez said that the Turkish investments in Kazakhstan reached $3.2 billion and that after Russia and China, Turkey comes third in the number of foreign shareholding companies in Kazakhstan.

The minister highlighted that Kazakhstan is proceeding rapidly toward great targets under the leadership of President Nursultan Nazarbayev, adding that Turkish companies continue to invest in the country in many fields from telecommunication to banking and finance, from energy to airport operations.

Pointing out that with its experience in the public and private sectors, Turkey is ready to give any kind of support to the projects that Kazakhstan would like to realize, he said Turkish contractors have so far reached about $25 billion in investment in approximately 487 prestigious projects including airports, energy and copper facilities, roads, bridges, expo fair construction and an artificial island. He underlined that Kazakhstan is one of the countries with the most favorable investment environment in the region.

Dönmez said Kazakhstan has approximately $170 million worth of investment in Turkey which leads the way with the most attractive support and incentives for investors worldwide. "We are constantly improving our incentive system in line with our developing economy and the expectations of investors. We also want fellow Kazakhs to take advantage of these opportunities offered by the Turkish economy. We have to take bigger steps in this area, paving the way for our investors," he said.

For this reason, Turkey attaches great importance to updating the agreement on reciprocal encouragement and protection of investments signed in 1992, the minister stressed.

"Today, we will witness the signing of 22 agreements, including 18 commercial deals, between Turkey and Kazakhstan, worth $1.7 billion. With the visit of President Nazarbayev, we would like to move our partnership to the next stage by adding and updating the contracts with new projects and further enriching the areas covered by the agreements. Our action plan aims to shed light on our investors' plans for Kazakhstan," he added.

Dönmez said that the projects in the action plan will bring a new impetus to bilateral economic and investment relations.

"The relations originating from the common history and roots between Turkey and Kazakhstan have gone far beyond the relations between any two countries in every aspect," Dönmez said, suggesting that the bonds of friendship based on mutual respect and trust should be reflected more on economic and commercial relations.