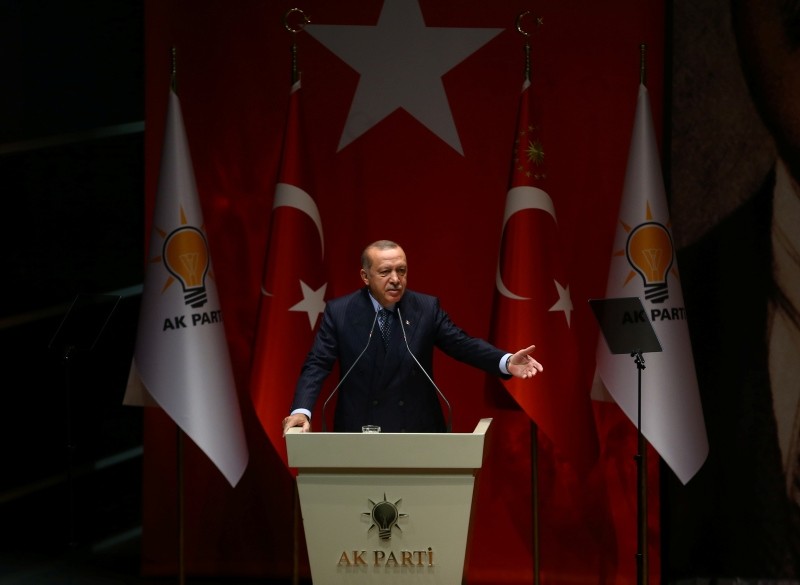 "This issue is totally directed by political motives," Erdoğan told a meeting of his Justice and Development Party's (AK Party) provincial leaders in the Turkish capital Ankara.

The recent fluctuations have also shown that no country in the world was secure politically and economically, Erdogan.

The U.S. sanctions were political in nature as Turkey has rejected the U.S. administration's "disrespectful demands", Erdogan said. He also called Turks abroad to buy gold and Eurobonds to generate additional public income.

Erdoğan also said that Turkey is putting new government investments on hold, ministries were reviewing their plans and would not consider making fresh investments.

Treasury and Finance Minister Berat Albayrak, who will announce details of a medium-term economic plan next week, has promised cost-cutting measures and more efficient spending.

"We are not considering any fresh investments right now," Erdoğan said on Friday. "There could be extraordinary and must-do investments, that's another issue, but apart from this, we will start looking (at investments)".

Those which were more than 70 percent done would be completed, he added, but "all our ministries will be reviewing the investment stocks they have and will conduct their work by prioritizing."

Turkey is battling double-digit inflation, which surged to nearly 18 percent in August, and a meltdown in the lira which hit a record low of 7.24 against the U.S. dollar a month ago.

The lira was trading around 6.100 on Friday, a day after the Central Bank of the Republic of Turkey (CBRT) announced the biggest hike in its benchmark interest rate in more than a decade, to 24 percent.

Commenting on Thursday's 625 basis point interest rate rise, announced just two hours after Erdoğan reiterated his opposition to high rates, the president said it proved the central bank was independent, while repeating his own skepticism.

"Yesterday the central bank has carried out the very much talked about interest rate hike and did this at a very high level," he said.

"They say independence, there you go independence. Now we will see the result of independence. Right now personally I am at my phase of patience. But this patience is to a certain extent. Because we can't say OK to a lever of exploitation."

The slide in the lira in July and August, combined with rising fuel and energy costs, pushed up prices for many goods, but Erdoğan urged private sector companies to keep producing and warned that authorities would not tolerate stockpiling.

"Plenty of people who stockpile have emerged. Our interior ministry and finance ministry will be giving the necessary answer to these people," he said.

"We will not give these people the opportunity because these people who hold stock are leaving our normal traders at a difficult position."