Trump imposes tariffs on $200B more of Chinese goods 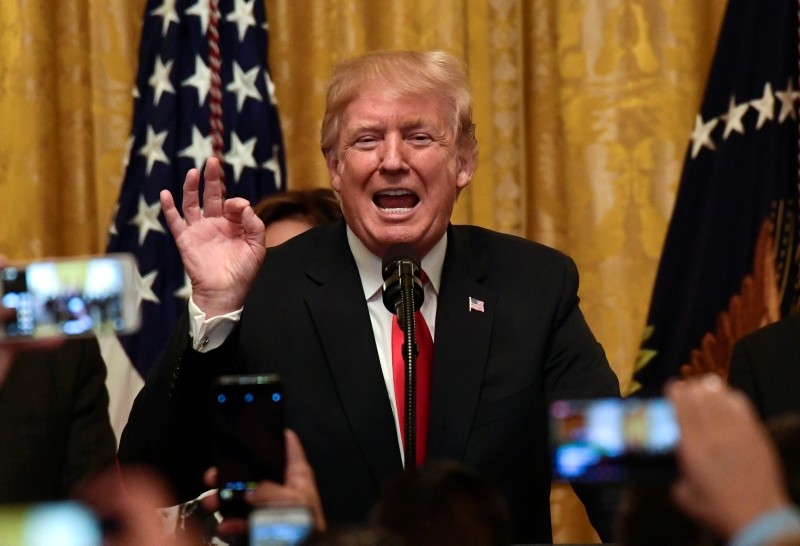 President Donald Trump speaks during a Hispanic Heritage Month Celebration in the East Room of the White House in Washington, Monday, Sept. 17, 2018. (AP Photo)
by Associated Press Sep 18, 2018 12:00 am
The Trump administration will impose tariffs on $200 billion more in Chinese goods starting next week, escalating a trade war between the world's two biggest economies and potentially raising prices on consumer goods ranging from handbags to bicycle tires.

The tariffs will start at 10 percent, beginning Monday of next week, and then rise to 25 percent on Jan. 1.

President Donald Trump made the announcement Monday evening in a move that is sure to ratchet up hostilities between Washington and Beijing. Trump has already imposed 25 percent tariffs on $50 billion in Chinese goods. And China has retaliated in kind, hitting American soybeans, among other goods, in a shot at the president's supporters in the U.S. farm belt. Beijing has warned that it would hit an additional $60 billion in American products if Trump ordered more tariffs.

Trump on Monday threatened to raise the stakes again if Beijing should retaliate, adding a further $267 billion in Chinese imports to the target list. That would raise the total to $517 billion — covering nearly everything China sells the United States.

After taking in public comments, the administration said Monday that it had withdrawn several items from an earlier list of $200 billion in Chinese imports, including child-safety products like bicycle helmets. And in a victory for Apple Inc. and its American customers, the administration removed smart watches and some other consumer electronics products from the list of goods imported from China.

At the same time, the administration said it is still open to negotiations with China.

"China has had many opportunities to fully address our concerns," Trump said in a statement. "Once again, I urge China's leaders to take swift action to end their country's unfair trade practices."

The two countries are fighting over Beijing's ambitions to supplant American technological supremacy. The Office of the U.S. Trade Representative charged in a March report that China is using predatory tactics to obtain foreign technology, including hacking U.S. companies to steal their trade secrets and forcing them to turn over their know-how in exchange for access to the Chinese market.

In May, in fact, it looked briefly as if Treasury Secretary Steven Mnuchin and Chinese Vice Premier Liu He had brokered a truce built around Chinese promises to buy enough American farm products and liquefied natural gas to put a dent in the trade deficit. But Trump quickly backed away from the truce.

In the first two rounds of tariffs, the Trump administration was careful to try to spare consumers from the direct impact of the import taxes. The levies focused on industrial products, not on things Americans buy at the mall or via Amazon.

By expanding the list to $200 billion worth of Chinese imports, Trump risks spreading the pain to ordinary Americans. The administration is targeting a bewildering variety of products — from sockeye salmon to bamboo mats — forcing U.S. companies to scramble for suppliers outside China, absorb the import taxes or pass along the burden to their customers.

In a filing with the government, for instance, Giant Bicycles Inc. of Newbury Park, California, noting that 94 percent of imported bicycles came from China last year, complained that "there is no way our business can shift its supply chain to a new market" to avoid the tariffs and warned "a tariff increase of this magnitude will inevitably be paid for by the American consumer."

Trump has reversed decades of U.S. policy in favor of ever-freer trade. He campaigned on a promise to tax imports and rewrite or tear up trade agreements that he said put U.S. companies and workers at a disadvantage.

"The president's negotiating tactics do not work well with China's way of thinking," said Sung Won Sohn, chief economist at SS Economics in Los Angeles. "I think things will get worse. I fully expect the tariff rate will go up to 25 percent."

Sohn said he believed China will retaliate against every U.S. tariff and the tit-for-tat exchanges will escalate until the U.S. is taxing all Chinese imports — $524 billion last year.

The U.S. economy appears strong enough to withstand damage from the tariff battle, he said.

"In the short term, we will have higher prices and fewer jobs than we would have had otherwise," Sohn said. "Fortunately, the U.S. economy is humming so we don't have to worry as much about what this will do to our economy."

Sohn said the Trump administration was pursuing a legitimate goal to get China to stop violating international trade rules. But he said the administration should have enlisted support from other major trading partner, such as the European Union, Canada and Mexico, and presented Beijing with a united front.

Trump's tariffs raise costs and create uncertainty for companies that have built supply chains that span the Pacific Ocean. Some companies are looking to move out of China to dodge the tariffs, said Ted Murphy, a partner at the Baker McKenzie law firm. Some will likely move to other low-cost countries that aren't in the line of fire. Some will bring operations to the United States — one of Trump's goals.

For years, multinational businesses "went where the labor was cheapest," Murphy said. "Now the calculus is more complicated."