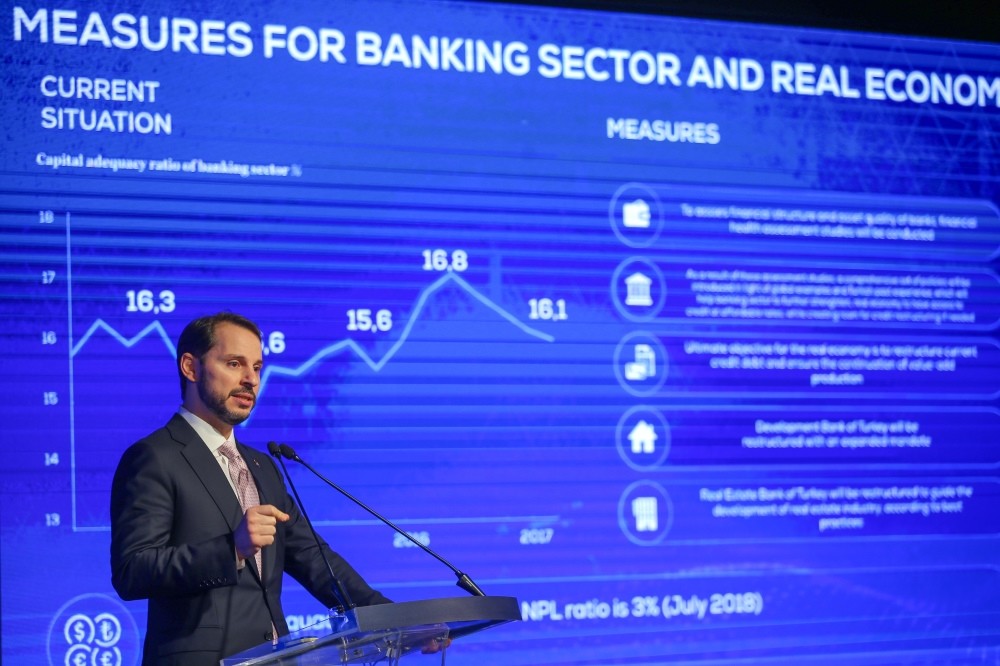 Global and local markets had been eagerly waiting for Turkey's Medium Term Program (MTP), which was renamed the New Economic Program (NEP), since the government took office in early June. Against existing problems in the Turkish economy, including currency volatility, running inflation and a double-digit deficit, the government's new plan was presented as a framework with a vision to battle these problems and set targets that are based on Turkey's macroeconomic realities, hence reassuring market confidence in the Turkish economy.

In his address during the presentation of the NEP, Treasury and Finance Minister Berat Albayrak stressed that the new program hinges on three principles: balancing, discipline and change. "We have devised a road map for economic rebalancing for the period of 2019 to 2021. As part of the rebalancing scheme, the government expects a 2.3 percent gross domestic product (GDP) growth in 2019," Albayrak said. For this year, the government foresees economic growth at 3.8 percent. The growth, Albayrak said, will start taking off when Turkey successfully implements the other principles of discipline and change and the new approach will institute an understanding of sustainable growth. According to the NEP, the Turkish economy is expected to grow 3.5 percent in 2020 and 5 percent in 2021. The Turkish economy registered a 7.4 percent expansion in 2017. In the first and second quarters of this year, it grew by 7.3 and 5.2 percent, respectively.

The concept of discipline corresponds to immense support for rebalancing via fiscal discipline. The last principle change aims at concentrating on increasing long-term production capacity and exports of Turkey, Treasury and Finance Minister Albayrak explained.

In line with the goal of cutting public spending, the Turkish government will also suspend investment plans for which the tender process have not been initiated or finalized yet, the minister emphatically stated.

Since investment expenditures constitute an important bulk of the budget, the government also revises the projects and will prioritize those that are close to completion.

"We will plan our investments in accordance with how close to complete they are. Those projects that are nearly 90 percent complete will be prioritized," the president said.

In a later phase, investments with a completion rate of 70 percent and 50 percent will be completed.

The central government budget balance posted a deficit of TL 50.8 billion ($11.4 billion) in the period of January to August and the budget revenues totaled TL 485.7 billion in the said period, up nearly 19 percent year-on-year.

Last year, the budget deficit was TL 47.4 billion, totaling around 1.5 percent of the country's GDP.

The new economic program suggests that the government predicts that the ratio of the budget deficit to the GDP will be 1.9 percent this year and 1.8 percent in 2019.

The rapid growth of the Turkish economy in the last two years largely fueled credits as companies heavily borrowed from abroad in dollars. With currency depreciation, as the Turkish lira has fallen over 40 percent since the beginning of this year, it has become rather difficult for corporates to pay their $216 billion dollar net debt stock.

In order to rebalance the growth, cut the current account and budget deficit and help companies manage their foreign currency debt, the government has so far taken measures to reduce public spending and raise savings as well as stabilize the volatility.

On Sept. 19, Turkish banks and financial institutions signed a loan restructuring a framework agreement in order to help businesses having difficulty paying off their debts, Turkey's Banking Association (TBB) announced.

According to JPMorgan, $179 billion in Turkish foreign debt matures in the year to July 2019, $146 billion of which is owed by the private sector, especially banks which borrowed abroad.

The government needs to repay or roll over just $4.3 billion and public-sector entities account for the rest.

Although banks have been exposed to major debts, their capital adequacy ratio and liquidity performance are still solid. According to the data of the Banking Regulation and Supervision Agency (BDDK), the total net profit of the Turkish banking sector amounted to TL 33.5 billion in January-July this year.

In an interview broadcast live on the A Haber and CNN Türk channels, Minister Albayrak stated that the banks and the corporations will launch restructuring negotiations on Monday.

One of the most highlighted points in the new economic program is the fight against running inflation.

Minister Albayrak highlighted that the Central Bank of the Republic of Turkey (CBRT) will continue deploying all instruments in order to institute price stability in a determined and independent manner.

"But this is not enough to become successful in mitigating inflation. Therefore, the Financial Stability and Development Committee will be functional again with a view to sustain financial security and stability," he said.

Albayrak added a specific program of total struggle against inflation would be announced soon.

The central bank hiked interest rates by 6.25 percentage points on Sept. 3 in a bid to tame double-digit inflation and put a floor under the lira, which has also been pressured by a row between Ankara and Washington over the trial of U.S. evangelical pastor Andrew Brunson, who is currently under house arrest in İzmir due to his alleged links with the Gülenist Terror Group (FETÖ) and PKK, a U.S. and EU-designated terrorist organization.

The Turkish lira has made moderate gains since the central bank's action.

As for employment, the treasury and finance minister said they will generate two million new jobs by the end of 2021, with an unemployment rate target of 10.8 percent in 2021.

In June, Turkey's unemployment rate was 10.2 percent - some 3.3 million unemployed people - while the number of people employed was 29.3 million.

Treasury and Finance Minister Albayrak noted that the current account gap narrowed significantly this year with the backing of increasing tourism and export revenues.

In the first half of this year, over 17 million foreigners visited Turkey and spent some $11.5 billion. Last year, the country's tourism income was some $26.2 billion while the number of visitors was 38.6 million.

Turkey's exports from January to August amounted to $108.7 billion with a 5.3-percent rise year-on-year. As of August, the 12-month overall exports reached $162.4 billion.

In order to cut imports and boost exports, the Turkish government plans to boost development and production in most import-intense sectors.

According to the program, the current account deficit will constitute 4.7 percent of the GDP this year. The ratio will gradually decrease as of next year and fall to 3.3 percent in 2019, 2.7 percent in 2020 and 2.6 percent in 2021.