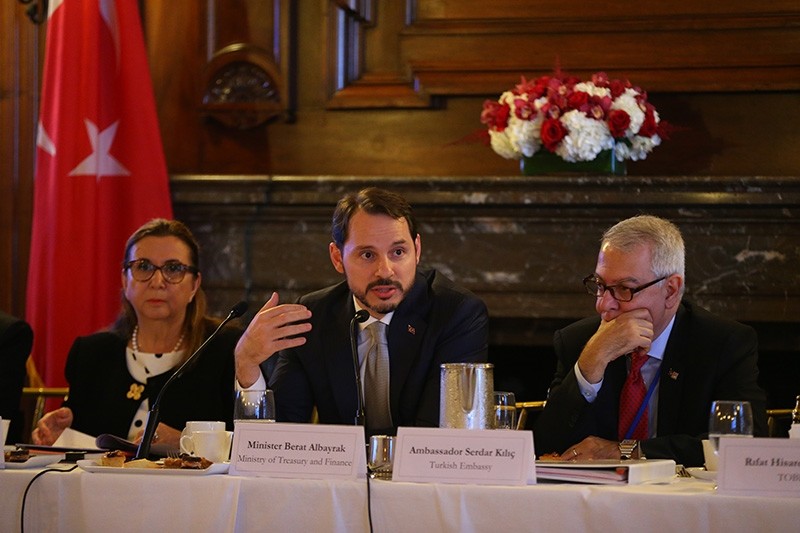 In his address to American businesspeople in New York, Treasury and Finance Minister Berat Albayrak highlighted that the Turkish economy is performing far better than many emerging markets and it is in an advantageous position in terms of debt management

Treasury and Finance Minister Berat Albayrak said Monday that Turkey is in a better position than the other emerging market economies and above the world average in terms of borrowing.

Addressing members of the American business world on Monday at the Financial Reforms and the Turkish Economy Conference in New York, Minister Albayrak emphasized the positive outlook of the Turkish economy based on macroeconomic indicators.

The meeting was held in cooperation with the U.S. Chamber of Commerce, the Turkish Heritage Organization and the Union of Chambers and Commodity Exchanges of Turkey (TOBB).

Elaborating on the New Economic Program (NEP) that was announced last week, Albayrak emphasized that they have a strategic, reliable, rational and strong economic program for the first time because all parties, ranging from the finance sector to the academic world, contributed.

"The transformation targeted with the NEP in the Turkish economy actually started in July," the minister said.

Underlining that Turkey is currently in a comfortable zone in terms of macroeconomic indicators, Albayrak continued that export-import coverage ratio soared to 70.1 percent in July 2018, up from 58.7 percent in the same month last year.

"Data for August is even better. The export-import coverage ratio increased to 83.3 percent in August 2018 from 69.1 percent in August last year," he added. "When it comes to figures, we are very comfortable. When we look at public, households, banks and private sector debts, we see that Turkey has quite a promising performance."

Pointing out that the ratio of public debt to GDP is 28 percent, Albayrak noted that the average of this ratio in emerging and developing countries is about 30 percent while the global average is about 70 percent.

"This means that Turkey is in very good condition in the area of public debt. The ratio of household debt to GDP is 16 percent in Turkey and 39 percent in emerging and developing countries, while the global average is 60 percent. Turkey is good in this area as well," he said.

According to Albayrak, Turkish people, having learned lessons from previous crises, are borrowing in Turkish lira – which is why these debts are not affected by exchange rates.

Stating that the ratio of the banking sector debts to GDP is 26 percent, Albayrak said that Turkey has displayed a better performance in this area than emerging markets and is above the world average.

Albayrak further noted that Turkish private sector debts account for 65 percent of the GDP, while this figure has risen to 94 percent in other emerging and developing countries.

"On the whole, Turkey is not faced with any specific problems regarding public sector, households or private sector debts," he added.

Highlighting that Turkey will nevertheless adopt a proactive approach on economic fragility, Albayrak repeated that, should the need arise in the banking sector due to the recent developments, the Turkish government is ready to provide the necessary support.

On the budgetary side, Albayrak noted that the reduction of the number of ministries to 16 as part of the new government structure is crucial in terms of both budgetary discipline and development.

He added that in the new era, the budgetary discipline and price stability will continue to form the main pillars of economic policies.

The central government budget balance posted a deficit of TL 50.8 billion ($8.2 billion) in the period of January to August and the budget revenues totaled TL 485.7 billion in this period, up nearly 19 percent year-on-year.

Last year, the budget deficit was TL 47.4 billion, totaling around 1.5 percent of the country's GDP.

The new economic program suggests that the government predicts that the ratio of the budget deficit to the GDP will be 1.9 percent this year and 1.8 percent in 2019.

Albayrak said that at this point, the speculations regarding the independence of the Central Bank of Republic of Turkey (CBRT) ended with the recent strong monetary policy steps.

Previously, the minister said the CBRT will continue deploying all instruments in order to institute price stability in a determined and independent manner.

The central bank hiked interest rates by 6.25 percentage points on Sept. 3 in a bid to tame double-digit inflation and put a floor under the lira, which has also been pressured by a row between Ankara and Washington over the trial of the American evangelical pastor Andrew Brunson, who is currently under house arrest in İzmir due to his alleged links to the Gülenist Terror Group (FETÖ) and the PKK, a U.S. and EU-designated terrorist organization.